I am relocating from the sunny, sunny, sunny south US where even the rumor of a dusting of snow shuts down entire cities to not-quite-over-the-border to the Great White North, where I am reading of requirements for snow chains, and it’s not at all difficult to find all sorts of warnings about doing them wrong can destroy one’s vehicle.

More specifically, I’ll be migrating from Texas to Oregon, by the south-and-west route (I-10 to I-5, then northwards) and the calendar looks like this will be happening during winter. After the move, I anticipate very low driving needs.

I have a 2013 Chevy Equinox (new to me). From what I read of Oregon, there are requirements for snow-capable tires or chains for part of the year. On the other hand, my owner’s manual says not to use chains due to clearance issues.

My current plan is to install winter tires on the car (Bridgestone Blizzak WS90, thanks consumer reports). Will these suffice? Or do I need to also carry some sort of add-on device? And if so, is there something that is clearly “ok” for this vehicle?

Can you be more specific about where you’ll be living and driving? Although I’m not personally familiar with the state, I’d actually suspect that most people in areas such as Portland just use all-season tires.

If you’re considering installing the winter tires while you’re still in Texas, keep in mind that they’ll wear very quickly in temperatures around 60 degrees and above.

Agreed that we need more information regarding the city you’re moving to. Typically the requirement to carry chains is only over mountain passes. Those are on the south end of I-5 or on several major roads that go east from I-5.

If you on the Coast of Oregon, then you probably don’t need snow tires. The coast mainly gets rain.

Chains are not needed unless you’re traveling in the mountains (a lot).

Seattle and Portland average less then 10" of snow a year…That’s NOTHING.

Snow tires are probably not required. Good all season tires should be fine. My wife’s cars have had nothing but all-season tires here in NH for the past 40 years…and she’s never had a problem. Our annual snowfall is 5 times what Seattle or Portland average.

Wait til you move there and talk to other people.

The biggest thing in driving in snow is KNOWING how to drive in snow. The biggest advice I give new snow drivers is - SLOW DOWN. Let me repeat - SLOW DOWN. In snow and ice you don’t have the traction for maneuvering and stopping that you on dry pavement or even wet pavement. Keep longer distances between you and other cars. Did I mention - SLOW DOWN.

Thanks for the feedback. Portland is the destination, and I intend to make use of the city’s excellent mass transit system; right now I’m focused on the getting there part of it because I’m expecting that to happen during the middle of winter.

Thanks, but “wait til you move there” isn’t the problem - the problem I’m trying to prevent is having some sort of incident during the big drive because I didn’t prepare for winter driving correctly.

I would recommend going the southern route and head up the coast, skip mountain roads where chains etc. may be required. 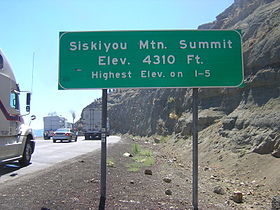 Siskiyou Summit (also Siskiyou Mtn. Summit; also referred to as Siskiyou Pass) is a summit (high point) on Interstate 5 (I-5) in the U.S. state of Oregon. It is distinct from Siskiyou Pass, which is a nearby, historical mountain pass. Siskiyou Summit is situated in the Siskiyou Mountains, approximately 4 miles (6.4 km) north of the California border. At 4,310 feet (1,310 m), it is the highest point on Interstate 5. When the highway was rebuilt on its current alignment, road cutting l The Siskiyo...

Thanks, but “wait til you move there” isn’t the problem - the problem I’m trying to prevent is having some sort of incident during the big drive because I didn’t prepare for winter driving correctly.

Then watch the weather channel on the days you’ll be traveling. That’s easy. Don’t drive when the weather is bad. It’s a lot more difficult to do that when you live there.

To get any farther south than Interstate 10 you would have to be in Mexico.

My advice would be to fly there and have the car shipped.

Your Equinox is front wheel drive ( Unless you have All Wheel Drive ) so if your all season tires are in good shape you really have nothing to worry about . And if it gets bad enough that you should not be on the road then you should stop no matter what kind of tires you have.

I have driven in some really bad snow storms and front wheel drive has been good enough with good tires.

Keep in mind that if winter conditions when you are driving north on I-5 have it heavily snowed you can divert to the main coastal highway 101, which is unlikely to have snow, at any point in CA and/or OR up to Portland.

It is two lane much of the way and winding and even quite twisting in places. So it is much slower driving than on interstates. However, heavily snowed interstates will also be slow going.

If anyone familiar with coastal hwy 101 knows differently/more, please correct my statements!!! I’ve driven only parts of it in late summer twice thirty years ago.

4 or all wheel drive vehicles under 6500 lb are exempt, but must carry chains?

What do they do about vehicles with owners manuals that say they can’t be fitted with chains?

I think they have these laws because most driver from Southern California no nothing about driving in snow. They think driving in rain is dangerous.

Case in point; My wife
s nephew who grew up in LA was going over the mountains to Bend Oregon. He was stopped and forced to buy tire chains. and had to pay to have them mounted. He told me it was a good thing he had them because he barely made it through slipping and sliding all the way.

He was driving an early Mazda MPV van and what neither he nor the guy that put his chains on knew that they were rear wheel drive, because the chains were put ON THE FRONT WHEELS.

What do they do about vehicles with owners manuals that say they can’t be fitted with chains?

Then they can’t drive, When the sign says "ALL VEHICLES MUST USE CHAINS"

Northern Cal. and southern Ore. have check points in the winter time, no chains you turn around.

If you can’t chain up for any reason, you don’t go.

I remember visiting Eugene Oregon in mid February when the roads in the Mid Atlantic were literally covered with ice and on arrival in Oregon the weather was wet, relatively warm and the dandelions were blossoming.

If you stick to the Coastal route you’ll hit nothing but rain, lots of rain.

If you stick to the Coastal route you’ll hit nothing but rain, lots of rain.

And wind, fog, road closures with no detours because of mud and rock slides.

But most importantly, It will be Big Foot mating season, so don’t get out of the car.

Watch the 10 day weather for the route and choose to leave when it looks warmest and clearest. Weather projections are typically good for up to 5 days in advance unless you travel along the edge of the weather system. You can always spend the night one or two extra days until the roads are passable again. You have to spend the night several days since you will travel about 2000 miles. Don’t hurry and get yourself into a dangerous situation. Use the tires on the Equinox now unless they need replacement.