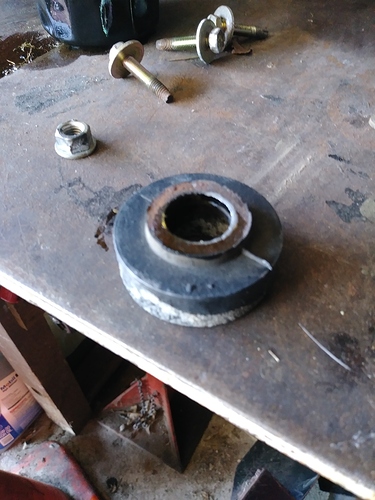 I’m replacing the starter on a 2000 corolla and after removing the old one, this piece fell out from somewhere on the chassis. I have no idea what it is. Any insight would be greatly appreciated.

Is it rubber?
Does the hole go all the way through, or is the other side closed?

Is there a part number molded into it anywhere?

Are you the original owner?

If you’ve driven the car since the starter setup, have you noticed anything different?

It has a rubber coating which is weathered on one side. The hole goes all the way through. No part number anywhere on it.

My father thought it could be something related to the strut that came loose and fell down into the engine. I’m the second owner. There was brand new struts installed before I bought the car.

We just reassembled everything and it fired right up so it doesn’t seem to be anything crucial.

It would look like an upper strut mount except it has no mounting bolts-there should be three protruding, and if you lost that, you’d know it. The other thing is it could be a body mount but again if you lost one of those, you should notice something wrong. I guess you’re just going to have to crawl under there and take a good look. Of course it wouldn’t be the first time that spare parts were left in the engine compartment but the rust is a tell tale.

There was brand new struts installed before I bought the car.

My guess is that it was dropped there when the new struts were installed. I too am leaning toward the strut-mount theory.

My friend who has owned many Toyotas is going to come take a look at it tomorrow. Thanks everybody for your replies.

The other thing is it could be a body mount

It does look like one with the male portion cut off. This Corolla is unibody though so…idk

This is what I was getting at with my original owner question. Although, it’s possible for something to end up in your engine compartment via critter, mechanic, or by some other means.

My friend who has owned many Toyotas is going to come take a look at it tomorrow.

Don’t be surprised if you get a puzzled look

My guess is that it’s not a part from your vehicle, rather mistakenly ended up under the hood (bounced in) or it was formerly used to “cushion” something. Best of luck!