Mystery Gremlin in my 95 Buick. No start below 40°

So i ran fine all fall. But as it got colder, the engine would have greater difficulty starting the first time each morning. It began to start up and stutter for awhile, had no power or acceleration when i depressed the pedal. I would have to turn the engibe off and restart it a few times to fix the issue. Eventually it would start up fine and run good all day. Now i have a no start condition in which the engine will turn over, run real rough for a few seconds with the tachometer spazzing out below 1k rpms, then it will stall out and give a little squeak like sound. I pulled error codes fpr cam and crankshaft sensors being faulty. So i replacrd the cam sensor, front 3 spark plugs and wires (one had been burnt in a section) and the Ignition control module. After the repairs it ran fine one day above 40 degrees and there was no camshaft code. Today i tried again, same no start and its over 40 and the cam shaft sensor code has returned. If i flood the engine for a few seconds on ignition, it tries harder to start up. I am totally stumped as to what this could be.

You ever trace the source of the crankshaft sensor code?

Is the battery fairly new? Have the battery connections been cleaned and tightened recently? Battery voltage checks engine running and not running ok? The battery and charging system can be affected by cold temperatures, so good idea to double check all that. Low voltages can trigger diagnostic codes for sensors when in fact there’s no problem with the sensors. I’m presuming you no longer have a code for the crank sensor. But its pretty common when crank sensors misbehave for that not to throw a code. So you still may have a crank sensor problem.

I havent done anything with the crank sensor and still have the code for it. Too hard for me to get to currently. My thought was to test the battery at autozone. It seems fine. I also had a est circuit grounded error code that cleared when i replaced spark plugs and wires that hasnt returned.

There is a ratcheting tool that will rotate the engine forward against the motor mounts so you can change the back 3 plugs and wires.

See if you can borrow one from a parts place like Autozone that has a tool loaner program. Being a former trucker, I just use a chain binder.

Im pretty sure the spark plugs are new. Checked batterh, its at 70 percent i guess, Thats after i drove it a few miles. Terminals and connectors look only slightly corroded. Waiting for it to be carged now

There is a ratcheting tool that will rotate the engine forward against the motor mounts so you can change the back 3 plugs and wires.

I’m trying to imagine how that would work …

I checked alternator and battery. Those are good. Spark plugs are good too. Air filter is new. Coil pack and ICU is good. Cam sensor is new and good. But it seems i found a vaccum line that isnt connected, or at least very poorly connected in two places. Im not sure what this line is for pr how this vaccum and fuel delivery system works but its upstream from the fuel injectors where the line branches off into the 6 injectors. If im explaining properly. Its a very thin tube, no more than 1/8 inch in diameter. But its completely separated. Could someone identify this line by picture? 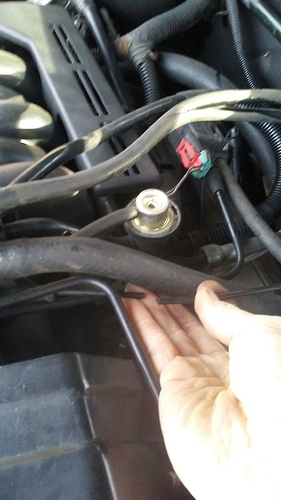 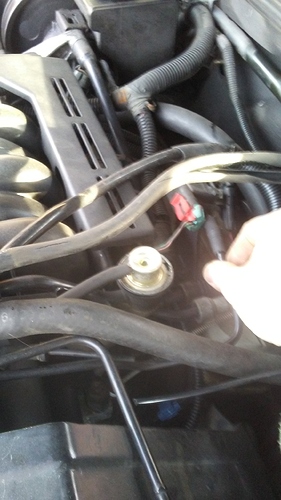 Both of these are poorly connected. What are they? Thabk you for the help guys.

No experience wBuicks but the one going to the gadget to the right of the fuel pressure regulator (that round thing) might be a vacuum switching valve of some sort. On my Corolla it is used to increase the idle rpm when the headlights are turned on to prevent stalling. If you have any poor connections w/vacuum hoses, good idea to just replace them. A leak in a vacuum hose can cause a lean condition, and make starting especiallyl in cold weather difficult. It will often cause poor idle quality or faster than normal idle when the engine is warm too.

I suspect those small lines are for things like the HVAC controller and HVAC blend doors. Usually when you have a temperature related issue, you take a look at the engine temp sensor. Although some here say they never had a bad one, it is something to check. Doing a computer diagnostics would tell if the temp being sent to the computer by the sensors, is in sinc with the outside temp. Also other things but if you know you have a crank sensor issue, that should be taken care of before anything else. That will shut you down.