Yes you could but why would you? The price difference between the 2 is negligible, if any.

If you’re looking for just one oil to use in all the cars I would switch them all to 5W20.

I have four different oil weights on my shelf. I use what the manual calls for and no big deal. Its the same price if you buy it by the case or individual quarts.

You got them this far using the correct oil, why would you change now? Warranty doesn’t matter at all.

I would recommend not messing with success.

The ram calls for 5W-20,?my 06 Dakota uses 5W-30,with the same engine,I imagine Dodge was trying unsucessfully to squeeze more mpgs out of the engine.You be the Judge,probaly wouldnt hurt a thing(these engines do not have VVT and are almost impossible to hop up.)

The recommended motor oil grade for your Dodge Ram is 5W-30. Only the 5.7 liter engine with MDS requires 5W-20.

I’ll bet you have the only V4 RAV 4 in the world… Anyway, since the Dodge doesn’t have any variable valve timing or anything you can probably use 5W-30 in it without incident.

The difference between 5W20 and 5W30 is the amount of microscopic coiled polymers contained in the oil. The coils straighten as their temperature expands, keeping the oil more viscous (resistant to flow) than it would be without them. It keeps the oil from flowing through the spaces between the sleeve bearings and their corresponding surfaces too readily, allowing the pump to better maintain a pressurized fluid barrier between the surfaces.

The tradeoff is that the polymers don’t lubricate anywhere near as well as the oil does. That’s why experts say you should never use an oil with greater than a 30 spread between the base weight and the hot weight… there’ll be too many polymers displacing too much oil.

If it were me, I’d stick with the correct oils for each vehicle.

Folks around were scared of 5W-30 for a long time,old habits die hard.

I began driving in the late 1950s, and multiviscosity oil wasn’t trusted by many motorists including me. I didn’t use multiviscosity oil until 1965 when I bought a 1965 Rambler and the manual called for 10W-30. The engine outlasted the body on that car. I bought a new Oldsmobile in 1978. The manual said to use either 10W-30 or 10W-40. I chose to use the 10W-40 but had a,problem with the engine carboning up. It turned out that the problem was the polymers in the 10W-40. I reluctantly switched to 10W-30, fearing increased oil consumption. However, I never had to add a,quart between changes in the he 33 years and 240,000 miles I owned the car. My.own experience has been to use the oil recommended by the manufacturer.

@hondo, I would just use what is specified for the car/engine. Besides it isn’t that difficult to buy 2 different weights, and read the bottle before you pour.

I agree that Hondo was a great movie

When I worked at a Citgo station in the late '60s, the only motor oil that we sold was–guess what brand?–Citgo. However, the long-haul truckers who came in and were in need of oil almost always refused to buy any of our oil

They all wanted Chevron’s Delo, which–IIRC–was the first multi-viscosity oil specifically for diesel engines ( Diesel Engine Lubricating Oil). They simply didn’t seem to trust any multi-vis oil except for Delo, and more than a few told me that they would rather run a qt or two low until they could find some Delo to buy.

I recall telling the station manager that if he carried Delo, he could probably sell a huge amount of it to truckers, but he insisted that Citgo wouldn’t allow him to carry a competitor’s products. He may well have been right about that detail.

I too remember Delo being very popular with truck drivers, though I never understood why.

@VDCdriver
"When I worked at a Citgo station in the late '60s, … "
You take me back a few years. That really was a Citgo? I remember only one Cities Service station near here in the 60s. I thought Citgo came later, but I suppose it varied by locale. Both were owned by Citgo, though.
Did you have to wear a Citgo costume of any kind, or even a hat?
I’ll bet the oil was in steel cans and you used a Plews oil spout, eh?
CSA

I remember only one Cities Service station near here in the 60s. I thought Citgo came later, but I suppose it varied by locale.

IIRC, the logo changed in this area just a few months prior to my employment in 1969. Personally, I thought that the Citgo name was…lame…and I preferred the name “Cities Service”.

Did you have to wear a Citgo costume of any kind, or even a hat?

Yup both!
We were responsible for laundering and we only got two uniforms and one hat.

I’ll bet the oil was in steel cans and you used a Plews oil spout, eh?
Correct again!
We had three grades of oil, with the lowest grade being non-detergent, straight-weight oil that few people wanted, other than those driving pretty old cars.

I’m not entirely sure about the pricing of the three grades of oil, but I think that they were something like 40 cents, 50 cents, and 60 cents.
One of my buddies was asked by a customer, "What is the difference between the 40 cent oil and the 60 cent oil?
My buddy’s rhetorical response was, "What’s the difference between chicken sh*t and chicken salad?"
Yes, he really did say that!

My standard work equipment at the Sohio station: 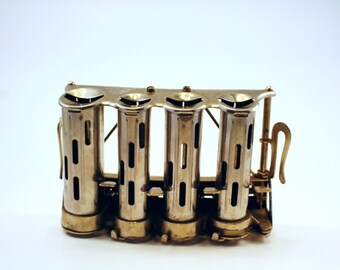 To open one of these: 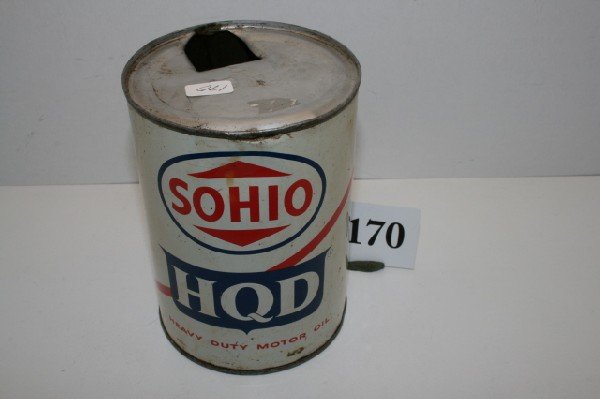