According to the Owner’s Manual, my 2009 Corolla 1.8 liter holds 4.4 quarts of oil (including filter). But there’s a difference of 1.6 quarts from “Add” to “Full.” That means at “Add” it’s lost more than 1/3 of its oil (in fact, a bit over 36%). I don’t understand how it would be acceptable to run an engine with more than 1/3 of its oil gone. I know from experience that when it’s halfway between “Add” and “Full” it’s already down about a quart. My guess is that the Corolla 1.8 liter uses the same dipstick as other engines but the difference in levels is because of the shape of the pan. Does anyone have any other suggestions as to what Toyota’s engineers were thinking?

having taught engineers physics for 35 years, I think you are
being presumptuous to assume they were thinking.

You should not wait until the oil level has reached the “add” mark to add–you should keep it topped off at all times. However, I would assume that the engineers have determined that as long as the oil is kept above that point, the probability of engine damage is low.

+1
It is very rare that I have to add any oil between changes, but when I pull the dipstick, if I see that the level is down by even 1/4 qt, I replenish it.

Dave, I have a feeling your Corolla may be burning oil, and the exhaust may have a leak, which is going into the passenger compartment. Fresh air and years of positive life experiences will hopefully answer the question you’ve asked.

What in the world does that even mean and where does the ’ you may have an exhaust leak come from ? '.

What in the world does that even mean and where does the ’ you may have an exhaust leak come from ? '.

It means @MarcoPolo1 thinks the only reason I’m concerned is that I’m suffering from carbon monoxide poisoning. As for everyone else, thanks for your replies.

How to Check the Oil Level in a Toyota Corolla

Check the oil level frequently on your vehicle, check out this article to learn how.

You are correct. It is not acceptable to run an engine 15% down on motor oil; much less 36%. That just beats the hell out of the remaining motor oil.

I’ve often wondered many times what engineers were thinking and it’s not just Toyota.

Possibly Dave’s Corolla has the wrong dipstick for some reason. 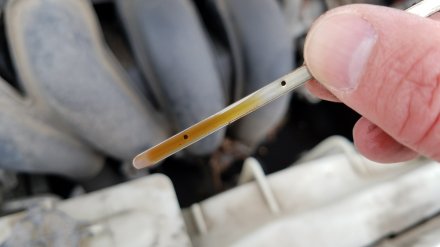 How to Check the Oil Level in a Toyota Corolla

Check the oil level frequently on your vehicle, check out this article to learn how.

I know how to check my oil, thanks. What I don’t know is why the people at Toyota would want me to think there’s not a problem until the oil is down more than 1/3.

Possibly Dave’s Corolla has the wrong dipstick for some reason.

Again, I know from experience that it takes a quart to bring it from the halfway point to full. It may well have the wrong dipstick but that doesn’t change what’s written in the Owner’s Manual.

Sure looks like the distance from add to full is about 1 thumb width. Which is 1”.

Usually yes but that’s not what the Owner’s Manual says. I’d always assumed “Add” meant a quart low but then I added half a quart when the dipstick was between “Add” and “Full” and it didn’t come up to “Full.” In fact, it didn’t show near “Full” until I added a full quart. That’s when I decided to check my Owner’s Manual and found out “Add” means 1.6 quarts low.

Since the car was built in 2009 or thereabouts he’s apparently been there for a while.

If it were me I’d probably just add 5 quarts at the oil change. It will not hurt anything to overfill it a bit and it could be considered liquid insurance. A half quart or so over is harmless.

We did have a Subaru in once with a seized manual transmission upper mainshaft bearing. Someone in CO had installed an automatic final drive stick into a manual final drive. The auto stick was an inch longer and that caused a FULL reading on the stick while leaving the transmission a quart down on gear oil. That in turn caused oil starvation up top at the mainshaft.

I then considered that someone in CO was likely driving around with the wrong stick in their automatic and wondering why it was puking out gear oil all the time.

The dipstick always indicates above “Full” after an oil change so yeah, the shop is probably putting 5 quarts in a 4.4 quart engine just to be safe.

Well, your engine can still run fine with 1/3 of oil gone. The oil is picked up at the bottom of the pan by the oil pump. It will not affect the volumn or pressure of the oil fed to the engine. What is will do though is the oil will be cycling through the oil more often and getting less time to cool down in the pan.

Running oil at a higher temperature will shorten the life of the oil, but as long as you don’t reach the end of life for the oil, the engine will not be damaged.