A 59 year old driver in a minivan plowed into a Nissan Sentra at 5 AM this morning, while being distracted by a cell phone. 8 people were rushed to a hospital, with 3 people including 2 children are in critical condition. When will they ever learn?

In our area we now have more traffic FATALITIES due to distracted driving than from drunk driving. And we live in oil and ranch country where folks are not timid about their drinking habits.

However, every party I’ve been to I the last few years there gave always been a “:designated drivers”, a concept that originated in Sweden and Norway, where a drunk driving conviction will lead to loss of driving license for one year!!

The new problem with distracted driving is that it includes young female driver and others who would not dream of drinking and driving having an "innocent’ conversation on their cell phones while not watching the road.

Just last week, a young female driver coming from a side road in broad daylight on open prairie plowed into a semi trailer on the highway. She was killed instantly. This vehicle would have been visible from at least one mile away. We now have $385 dollar fine for texting or talking on a cell phone in the car, and 3 demerit point on the license, but it does not seem to help.

The OP may turn out to be correct about a cell phone having played a part in this collision, but the latest information is that the police are still in the midst of their investigation, and are speculating that the driver of the Sentra may have been distracted by a cell phone, because he apparently ran a red light. There is nothing to indicate that the driver of the Nissan van was distracted by a cell phone, or by anything else, before he/she T-boned the Sentra: 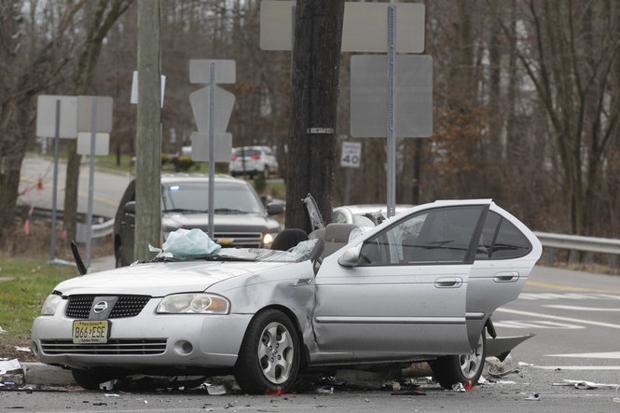 Eight people in total were injured.

More and more I look around and see people totally engulfed in some sort of interplay with their i-phone. I often see a large group eating in a restaurant and everyone above the age of 10 has a cell phone which they text and talk on virtually non stop. Conversation among a group is rare. And driving doesn’t take too much attention off the cell phones for a great many. And Mercedes Benz advertises how their sensors can take care of keeping you in your lane and stop you before rear ending another car and we all know why the car needs to pay attention. Will self driving cars come with a matching cell phone?

Not long ago I referenced an incident here in OK in which 2 state troopers were struck by a texter while the officers were on scene at a truck crash. One trooper was killed and the other seriously injured. This led to passage of a law which took effect 11/1/2015 and allows police to ticket anyone they see using a cell phone while driving.

From what I’ve seen so far (in spite of several thousand tickets) is that virtually nothing has changed. Motorists are just as entranced now as they were before.

It was stated that this law due to the trooper’s death and the sentencing of the texting driver was “going to be a game changer”. Not.

The guy who killed the trooper received a measly 5 years in prison (out in 3 or less) and something like 7 years of probation.
In the 4 hours before the guy struck the trooper it was discovered that he had sent 200 text messages and he also admitted to reading books and watching movies while driving.

The punishment is going to have to be a lot, lot harsher before don’t text and drive admonitions sink in. The current 100 dollar fine is not that much of a deterrent. Maybe 500 dollars per incident and after 3 incidents revocation of a drivers license for 5 years along with X number of weekends picking up trash alongside the roadway would have more of an effect.

The problem is cultural. Much like drunk driving was extremely prevalent, despite the dire consequences, until we started teaching our young people (in school) how dangerous it is. If parents and schools aren’t teaching safe driving through less distraction then nothing will ever change. This means that anybody driving with kids in the car MUST set a good example and not be a distracted driver. Sadly, some of the worst offenders now are 30 and 40 year olds who are parents and feel that they must be connected every moment of the day. Their children are getting the exact opposite message of what is needed these days.

Just to update this tragic tale, one of the young passengers involved in that crash has died.
At this point, the police have not clarified whether she was a passenger in the Nissan minivan or in the Sentra that was broadsided by the minivan. The one thing that remains a constant is that the police continue to say that the driver of the Sentra went through a red light, and that he MAY have been distracted by a cell phone. 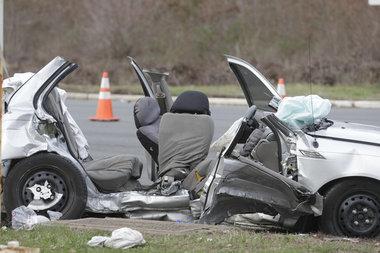 A 29-year-old man and a 21-year-old woman remain in critical condition from the Friday crash on Route 1.

Thought some of you might be interested in hearing about the latest pair of fools I encountered late yesterday afternoon in which cell phones may have been involved. I had to go into town (25 miles one way) and the first stretch of roadway is an arrow straight 8 miles with a stop sign at the T.
There’s a sharp rise before the stop sign followed by a downhill run. I had the cruise set at the posted 55 MPH and as I came over the rise I see 2 cars in front of me; one on the shoulder and one in the middle of my lane parked side by side; both pointed in the direction I was going.
I had to hit the brakes and veer into the oncoming lane to go around them.

The emergency flashers were going on both SUVs. In between those SUVs were 2 young women leaning against their respective vehicles and holding cell phones in their hands. They were chatting away while blocking the highway on a blind rise. One of them had a roughly 6 year old little girl standing beside her and the other lady was holding an infant.

As I made my turn at the stop sign I looked back in time to see an oil tanker crest the rise and also veer over to keep from running these idiots down.

I might note that as I passed those 2 morons who were endangering their children that neither one of them gave any indication they knew I was in the vicinity or even cared.
A 100 feet away was a side road where they could have pulled over to carry on their chit-chat session.

I called 911 on some fool bright and early on New Year’s day. They were weaving so bad that I thought they were drunk. I later found out that they were texting New Year’s greetings to all their friends and were oblivious to what was happening around them. They were cited and I hope the judge impacts their bank account to the fullest extent of the law.

Leaders of the Bike & Build group say they're shaken by the news of the death of a rider who was hit by a car in Oklahoma Thursday.

This happened last summer and on the local news tonight officials finally brought manslaughter charges against her.

When will they ever learn?

They won’t. People who insist on using their phones while driving are too STUPID to learn.

Self indulgence appears to be guaranteed by the Bill of Rights. Everyone is in the PRIVILEDGED CLASS.

@VDCdriver is correct. Cops love to say that distraction or alcohol MAY be a factor. It can be very damaging if those things weren’t a factor, especially if they cite alcohol.

When the news says “35 year old John Smith ran a red light and killed a kid - - police say alcohol MAY have been a factor,” then Smith is branded as a drunk forever. Even if evidence later comes to light that alcohol was not a factor, that rarely gets reported, and even if it does, even more rarely gets remembered.

A relative-by-marriage had a bad wreck. Almost died. The hospital gave him drugs to keep him alive which cause a reaction that fools the enzymatic blood test into returning a positive for alcohol. The cops then (illegally) got hold of his medical records and used them to accuse him of drunk driving even though he hadn’t been. The prosecuting attorney pressed the case even after the doctors told him flat out that the test was skewed by the drugs they’d given him and was not accurate. He’s still got people thinking he was drunk and saying unpleasant things about him behind his back and to his face, and this was years ago.

And in a lovely side-twist, the prosecutor got caught drunk driving shortly after dropping the case against him.

Even some professional drivers seem to have lost common sense. Two days ago I was waiting an unusually long time for a parts delivery from my usually quick supplier. I finally called the store and learned the driver was in a wreck. It seems a FedEx driver–yes, FedEx driver–was texting and blew through a stop sign and ran into the parts driver.