Modifying the gear ratios in a manual 5 speed transmission

Has anyone heard of modifying a manual transmission with custom gears to change the gear ratios? For instance, instead of 1 2 3 4(Direct) 5(OD) it would go 1 2 3(direct) 4(OD1) 5(OD2). Instead of left up to down to middle up to down to upper right, it would be upper left to lower left to middle down (3rd, direct), to upper right (4th) to upper middle (5th, the second over drive).

I know 3 speed manuals were standard, so 2 gears below direct drive should be enough to get moving.

Most manual transmissions can be obtained with selection of gear ratios Some with double overdrives as you suggest. There are several types of 6 speeds with overdrives in 5th and 6th.

But they really don’t matter. What matters is the total spread between 1st and the final gear, not whether it is 1:1 or overdrive. The differential gear can be adjusted to suit.

You could buy a 5 speed with a 0.72:1 5th gear instead, get the same 2.16:1 final drive with the 3:1 differential gear and still have that 9:1 total 1st gear. But you’d have a bigger RPM change between gears that could be an issue.

Or you could just buy a 6 speed to replace the 5 speed and get the extra overdrive gear.

But if you are suggesting the shift pattern would change… It won’t. The same H pattern would be used, just with more legs. Even the 7 speed manuals used in some cars still have 1-2 in the far left gate. 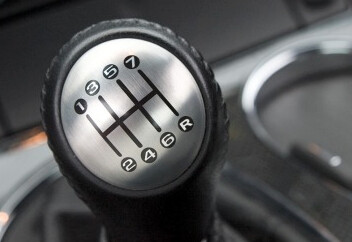 Yep, can change the final drive ratio instead. Done frequently with RWD.

I was thinking just put a 2.73:1 rear differential in it or something like that?

Thanks for the responses. I was thinking going from 3.55:1 to 2.73 in the differential would put too much stress on the drive shaft components when towing, and it would wear the clutch out faster. It would also require changing the front differential. If there was more spread between the gears it could have both advantages at the same time. I can skip 3rd gear without too much trouble, and I know there was a time when transmissions only came with 2 gears below drive.

The modification would only require 3 new gear pairs in the transmission, which needs an overhaul anyway. Edit actually only 2 new gear pairs. Original 2nd needs to be taller, and then original 3rd becomes the new 2nd overdrive. The driver just has to learn to skip the original 3rd gear.

With towing involved I wouldn’t change any ratios.

What’s the vehicle…and what’s it going to tow?

They used to put 2.73’s and the like in vehicles during the 70’s before overdrive transmissions came out. Maybe put 2.73’s in it and never use OD (or 4th maybe) when towing?

Higher (numerically lower) gears don’t do a ton for mpg in a truck anyway, from my experience. You just use more throttle with the higher gears to get the vehicle to do what it would have already been doing if it had been equipped with lower gears. Even on the highway, higher gears make you drop from 5th to 4th more often, etc. Winds up a wash or a minimal gain with the higher gears. My experience only. 3.73’s for the win lol.

Changed gears to 4:11, and corrected speedometer, acceleration was greatly improved and my mpg went up to 13.5

IMO, changing to 2:73’s could easily backfire on you.

3.55:1 to 2.73 in the differential would put too much stress on the drive shaft components when towing

Rather than rebuild the trans, look for a version with a lower numerical 5th gear. Tow in 4th, drive unloaded in 5th.

What’s the vehicle…and what’s it going to tow?

Higher (numerically lower) gears don’t do a ton for mpg in a truck anyway, from my experience.

Changed gears to 4:11, and corrected speedometer, acceleration was greatly improved and my mpg went up to 13.5

Automatic transmission for sure in your case. Same reason why in a 4 speed automatic you can get better economy in 3rd (with OD cancel on) when towing, since the torque converter locks up in 3rd now and the engine speed is the same as it was in 4th gear unlocked.

Exactly the opposite. It reduces the torque the engine can apply by 30%…

The torque to the wheels is. The torque coming out of the transmission in 1st gear is the same regardless of the differential ratio. Lower ratio in the rear means it will be harder to spin the tires and more torque will have to be put on the drive shaft to obtain the same torque at the wheels.

Rather than rebuild the trans, look for a version with a lower numerical 5th gear.

Yeah they make a better transmission with 0.7:1 OD that’s used on the bigger trucks. That’s an option. I wanted to know if 0.6:1 could be done by adding a second overdrive in a modified transmission. It has plenty of acceleration with 0.8:1 at 60 MPH.

Automatic in my experiences. But I don’t see how it would really matter manual vs auto. The final drive ratio is going to be the final drive ratio with whatever gears you choose. If you drive a lot of flat highway, taller final drive can improve your mpg. If you have any hills, stop and go, etc….they don’t do much, I don’t think.

Have a friend that had an 81 Jeep scrambler that was equipped with a 258 inline six, 4 speed manual (no OD) and 2.73 gears. He swapped in a Vortec 350 and taller tires and swears his hwy mpg improved dramatically. The taller tires with those highway gears were similar to adding overdrive, and the 350 (with fuel injection that the original engine lacked) in the light Jeep made enough power to lope along at low rpm’s at 65 mph or so.

I’d be somewhat afraid that if you gear too tall with a six cylinder in a full size 4wd, you may lack power, need to downshift, and not wind up accomplishing anything. Depends on what you’re intended use is for the truck, I suppose.

The cars or trucks with 3 speed transmission had no overdrive and engines with more torque at lower rpm. Overdrives were a seperat optional unit back then.

I would encourage you o not increase the gap between gears if towing with a manual transmission. I know you probably want better fuel mileage but it will likely cost more money to do this than you save in fuel and can cause other problems.

In that case, you shouldn’t be towing much of anything with the M5OD. It’s a light duty trans with a notoriously flimsy clutch. With 2.73 gears (which was a factory option for the 2WD model) maxing towing weight was 2100 pounds.

The 300 was a solid engine, one of the most reliable engines Ford made, very versatile too, got used in some non-automotive applications as well Fuel economy was not one it’s design criteria though. It’s going to get about the same fuel economy as a 302 in typical use. With that said, it makes virtually all it’s useable power below 3500 RPM. So going to a taller rear end (within reason) shouldn’t effect performance too drastically. I’ve always felt that for a daily driven F-150 with the manual and the 300. The 3.08 and 3.31 rear end ratios were ideal.

If the transmission is a typical 5 speed, it is a 4 speed with 5th hung off the back of the main case. Changing the 5th ratio would not be all that hard if your transmission parts supplier has both gears needed for the different ratio… the drive and driven gears.

Changing 4th, would likely require a new countershaft as many designs cut all 4 gears onto a single part and then the mainshaft gears are separate.

I thought 4th (in an unmodified 5 speed) was direct drive and the counter shaft isn’t used? That’s why I was talking about changing the shift pattern since 4th, which would become the 3rd gear in order, must stay direct drive.

How would you change the shift pattern?

True, 4th does lock the shaft for direct from input to mainshaft at least in the trans I’ve worked on but not all trans work that way.

The countershaft still turns as it is always in constant mesh even if it isn’t carrying torque.

Doesn’t mean you can make 3rd an overdrive. Parts don’t exist to do that, plus the shift pattern would be stupid.

My making 2nd gear taller which then makes the next gear direct drive, which was called 4th but now it is 3rd. The original 3rd (middle up) then becomes the new 5th gear (still middle up). The driver has to learn to go from lower left directly to lower middle, and finally end up going from upper right to upper middle.

Doubt it would be worth 1/10 the cost to make it work.