I live in a small Third World village in the mountains of Mexico. Regulars may remember this.

Yesterday, I was walking back from visiting a friend, and on a small side street was parked the community garbage pickup.

You may ask what is a garbage pickup. Well, it’s a 2002 GMC pickup truck with many steel barrels in back, and two workers hanging off the side. They drive around on garbage pickup day on streets where the big garbage crushing truck can’t go. They pull into your area, and honk the horn, and scream garbage in Spanish for a while, hoping people come out with their garbage. Some folks just lay the bags on the ground, which coupled with loose dogs makes for a mess.

Anyway, they were parked there, with the hood up. I am a man, so I had to get involved, right? Heh, heh.

I went over and talked to the driver, a friendly man who worked long enough in the US to speak a certain amount of English. I asked him what was wrong. He told me the motor didn’t want to start and ran really rough.

I asked him if the Check Engine light was on. He said it is always on! But, he said the hard starting and rough idle just happened. I asked if he wanted me to walk home and come back with my scanner. He said, sure. the town doesn’t have a scanner at all!

Live data showed ECT temp at -39, so I told them there is their chronic Check Engine light problem.

I wrote down the codes and told them to tell the mechanic to look on the Internet for the failure code for that P1345 failure in Spanish.

I told him the temp problem was probably the temp sensor, though it could be the wires.

Looking up the failure P1345 for GMC, it looks like it could be distributor alignment, or problems with the sensors on crankshaft or camshaft. Or, just plain alignment issues for unknown reasons. Whatever it was, it apparently happened out of the blue.

I did give them my phone number in case the mechanic wants to talk to me.

He did show me something on top of the motor which had just been changed. It was a small heat sinked assembly with a cable plugged into it. The highest part in the center of the engine. No idea what it is.

I do have a manual in spanish, but it is for GMC 1988 - 1998. And, none of the engine photos shows anything like that. Autozone also wasn’t much help. Doesn’t seem to be any repair guide, you get a generic page if you click on repair guide for Sierra 2wd.

Most of the data I should have I didn’t get, like model and motor. Sigh. The driver did say this was the only GMC they had. But, if the mechanic knows his stuff, having the codes will tell him all he needs to know.

Next time it comes around, I will get the missing data, Just to have it.

Is this sort of failure something our professional mechanics would have experience with, to give me a clue what is the most likely to happen failure? Position sensors or distributor alignment? Just to know, I guess.

Thanks. I just thought y’all would find a Mexican tale interesting. Sorry if not.

We take a lot of things for granted here in the US.

Absolutely! Good point! I sort of doubt there is another scanner in town. No, a young man worked in NYC for 11 years, and came back with some sort of horribly expensive system for all models. I forgot about him.

The truck might have to be brought up to Third World Standards…ALL the smog stuff removed, bypassed or blocked off…An HEI distributor installed if possible…An adapter plate made and a carburetor installed with a low-pressure electric fuel pump…The community must be served…

Actually, they do have smog standards here. Nothing like in the USA, but they are there. And, they are meticulous about annual verification.

In Sonora, vehicle emissions are an abstract concept…Especially for garbage trucks…

I’m guessing the thing on top of the engine is used somehow to compensate for the non-functional coolant temp sensor. Otherwise the engine would be running very rich if the computer thought the coolant temp was -40 degrees (F I assume, not C). Seems strange not to simply replace the ECT, but maybe there’s a reason for using a work-a-round instead. Maybe the sensor is broken off and they don’t want to risk creating a difficult to fix coolant leak removing it.

I agree w/you that the no-start problem is likely due to the other code, either a faulty crank or cam sensor. Crank sensors seem like they are usually the more temperamental of the two. When there’s garbage to be removed, the garbage truck has got to be working, so good on you for helping out.

No, they do not have a scanner, so probably had no idea what the check engine light was on for. These people are not always high tech, for example no scanner at all.

I cannot tell you for sure that the motor wasn’t running very rich. This poor pickup is not exactly in good shape. They probably wouldn’t notice.

Remember this is a culture which believes you must use 20W-50 oil or you will wreck the motor.

The thing on the motor looks like it belongs there, not jury rigged at all. I need to see another GMC pickup in that age bracket or get the correct manual.

Perhaps I need to try to get a photo and post it. And, I had the camera with me as always. Just never thought at the time.

Heck, why not a photo of the whole thing, barrels and all?

Out of those engines, listed, only the 4.3 V6 has a distributor

As for that part with the heat sink, could it have been an ignition module . . . only the 4.3 V6 would have that, out of the engines I listed

As I said above, I did not get most of that model/motor information. I had the codes on my mind, and trying to communicate with them. When I see it again, I will try to get it for future reference. These guys are garbage guys, not mechanics, and it is hard to get information out of them. Or, give it to them.

Yes, I suppose it could have been an ignition module. Not many wires going into it.

For cultural reasons, I am going to guess 4.3 V6. They tend to buy the smallest cheapest motor, even for big semis, thus grind slowly over mountains with heavy loads.

That is good to know about the distributor. If it is not the 4.6 it can’t be distributor alignment.

Sounds like the timing chain (belt?) skipped a tooth. The cam and therefore the distributor would be out of sync with the engine and it would run poorly. Skip one more tooth and it won’t run at all.

Any GMC truck of that year has chain

Given the situation, I’d not be surprised if the truck has 500K and a loose chain

That is partly because they are built in Toluca. I drove by the plant when I was there 15 months ago. They had rows and rows of brand new Chargers and Challengers sitting outside, waiting to go on rail cars for the trip north. There is no duty to be paid on Mexican built vehicles. NEW USA built vehicles are expensive to take into the country.

Whoever heard of an Ibeza outside of Spain or Mexico? 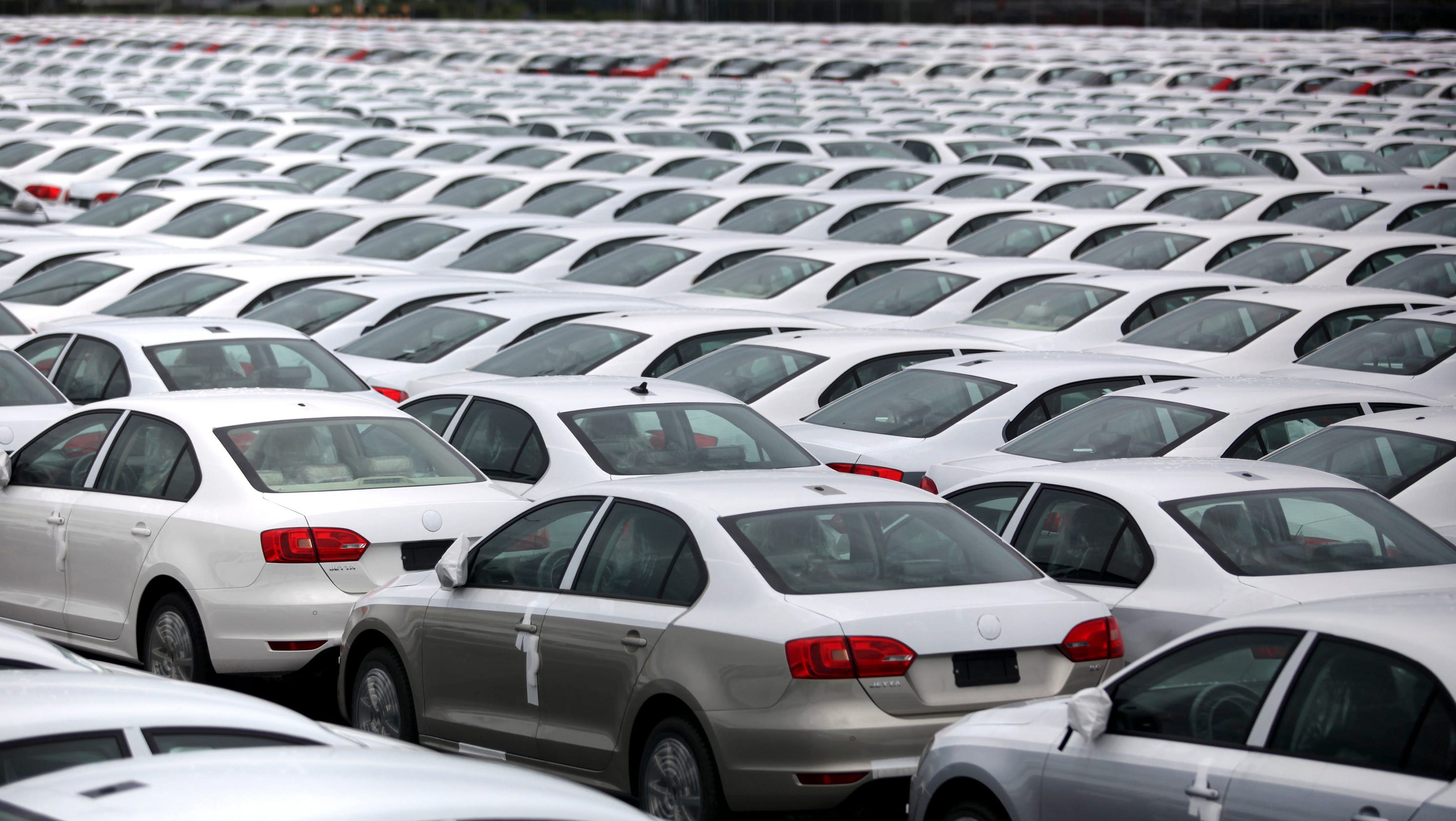 Mexico to best Japan in car exports to U.S.

CELAYA, Mexico (AP) — Mexico is on track to overtake Japan and Canada and become the United States' No. 1 source of imported cars by the end of next year, part of a national manufacturing boom that has turned

The picture shows VWs built in Puebla. I was there over night, but did not see the plant.

The VW plant is just north of the cuota (tollway from Mexico City to Vera Cruz, as you drive west out of the city.

I did happen to notice the odometer on that pickup, though I forgot until you said something. It had 223,000 km, which is somewhat more than 100,000 miles.

I never heard of an Ibeza here in Mexico, heh, heh.

The Dodge Charger used for police work in the US is rated very close to 150 mph top.

Good point about the timing chain/belt. I will pass that on if I get a chance, wentwest. That would agree with the sudden failure, though of course so would other possibles.

That 223,000 km does not properly describe the life of that pickup. It is currently used for garbage work, but it may have been used for a “patrol” before. That is, a cage on the back, and cops standing back there on a police patrol. I don’t know.

But, now it goes up and down steep hills and stops a lot.

Now, I am anxious to see the pickup again, but they do not come by every day.

@irlandes … changing the topic a bit … since you live in Mexico, is it true you can still purchase a new VW air cooled Beetle there? I have heard opposing views, the first that VW has stopped all air cooled vehicle production, and the second, that another company has purchased the rights from VW to continue to build and sell air cooled Beetles and is doing so wherever air cooled engine equipped vehicle sales are allowed.

Beetle production has stopped in every single country, including Mexico

Db nails it. They made the last Beetle some years ago, and the bus, made in South America, stopped in recent months.

Since labor is low, and not much rust, you can have a very old Beetle restored to new condition at reasonable cost. Though my information is old, at one time you could have a Beetle completely reupholstered for $300 USD.

There are a couple small cars which are taking the place of the Old Beetle. Not sure if it’s called Chevy or Chevvy, but a small car of somewhat modern design, except probably not as crash resistant as we expect in the US, but that is indomitable, Runs along 70 mph on the high speed highways, and seems to run a long time without overhauling motor (unlike the Old Beetle.)

There are others as well.

The thing about the Old Beetle is almost anyone can fix them. Some years ago, a cousin had the generator light on. We opened the motor cover and I pointed at the generator, and told him the brushes can cause that failure.

The next morning we drove to a mechanic, who installed new brushes, cost including labor was less than $5 USD. Poor cousin actually thinks I know something about VW repair. It was just something I once read in VW for the Compleat Idiot, by John Muir. (?)

I have heard nothing about licensed production by other parties. This would seem questionable, because the economics of production was the reason to stop building the Beetle. Too much labor in the assembly process, which had to compete with automated assembly models. Still, who knows?

And the price was out of line, versus much more modern designs

It’s pretty interesting, if you think about it . . .

People in the US and Europe are nostalgic about the Beetle and the air cooled bus, because they’re now classics

Yet the central and south american countries where they were produced after production ceased in europe were tired of them, because they had been in production continuously, far too long.

That’s what often happens when you keep anything in production for an extremely long time. The people will often say “Enough is enough. We want something newer.”

I’d sure be interested in the outcome of the truck issue. Let’s hope @irlandes‌ finds out more news.