Hello. Let me start by telling you when and how the problem occurred. Half a year ago, I changed the coolant for the first time on the Astra H 1.7 CDTI 81 kW turbodiesel. This engine has nowhere to vent the cooling system. On the advice of some mechanics, I left the coolant tank open when I refilled a new one and started the engine as this was supposed to bleed the system (I squeezed the rubber hoses). Since it was winter and the car did not reach the operating temperature at idle, I drove approx. 6 km slowly to approx. 60 km / h, with unscrewed coolant tank. The cabin heating was set to max, however, cold air was blowing all the time, so there was air in the system. After about half an hour of running the engine, I see that it will not be vented, the cabin heating is not working at all, so I screw the coolant plug (later I find out that the instructions say that the fluid plug must be screwed to bleed the system ). At that time, however, the system actually quickly began to vent, it was also necessary to top up approx. 1.5 liters of coolant.

After changing the coolant, when the engine is idling, a relatively loud, metallic “knock” appears randomly, about once every 30 seconds - 1 minute. So a rather rare occurrence, but still every time the engine is warm. It sounds a bit like the knock when you turn off the hot engine and it is cooling down, but in my case it is louder and while the engine is running. After googling the symptoms, some suggest that the head gasket between the two cylinders could be leaky, and that this sound represents “escaped” compression from one cylinder to another. Let me mention that the car does not consume coolant, the coolant is pure without oil, no bubbles are formed in it, and the oil is also clean without traces of mixing with the coolant. So when it comes to oil and water all is good.

That’s why it amazes me. It is true, however, that this never happened before the coolant change and it started right then. I hope that someone is familiar with this experience and can give their opinion. Thank you all for your help.

What you might be hearing is coolant cavitation due to air in the cooling system.

You also have to make sure the proper anti-freeze is used when mixing the coolant. 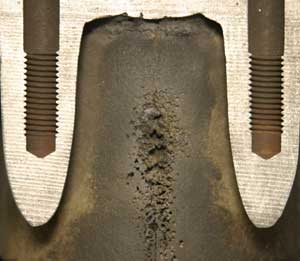 Cavitation is an issue that has plagued the diesel engine for years. One of the main concerns created by cavitation is the erosion of the metal on the outside surface of cylinder liners. Tiny air bubbles are formed during normal engine operation and...

Thank you for your response. The coolant I am using is according to the manufacturer’s specifications. I also think there is no more air in the system, since the heater is working properly and the coolant level is the same for the last half year.

What I forgot to add is also a new symptom after coolant change. When I turn the hot engine off, wait for an hour and turn it on again, it produces “tick tick tick” noise for about 3-5 seconds. It is belt driven engine and I don’t think it is oil-pressure correlated symptom, because it started doing this also after the coolant change.

Thank you in advance for your help.

Not sure what you mean. If important, suggest to explain, reword, etc.

As far as your actual problems, I’m thinking either

Suggest to assume the best, and the problem is air remaining. Absolutely no experience with this car or engine, so about the best I can tell you is that when I refill the cooling system on either of my vehicles I always run the front wheels up on ramps, so the top of radiator is the highest point in the cooling system. Then I just idle the engine with the radiator cap removed, heater on high, adding water/coolant if the level drops. I’ll see big burp-like bubbles coming out the top of the radiator for 5-10 minutes, repeating every 5-60 seconds, and when those stop (and the engine is at normal operating temperature) I know the system’s air has been removed.

Suggest to consult a shop manual for your vehicle, some designs require very specific air-bleeding procedures, even requiring specialized vacuum devices, etc. The most difficult to bleed tend to be vehicles with very low-slung hoods, sports cars and the like.

I left the cap on the coolant tank open, after I refilled it with fresh coolant (that’s why the system couldn’t pressurize itself, like it normally would).

The coolant was pre-mixed with distilled water 50/50 at room temperature as according to manufacturer’s reccomendation, I mixed it well before pouring it to the coolant tank. This specific engine has a coolant tank mounted away from the engine and the radiator and it is located higher than the cylinder head and the radiator.

you may need to use something like this on your vehicle…

Vacuum refill really looks to be the best option to use for my type of engine. Are there maybe any special things we have to be careful about when we use this method? I presume, the rubber hoses could colapse under vacuum?

It is normal for the rubber radiator hose to collapse when under vacuum. it will go back to normal when vacuum is released, and coolant is added.

I’m presuming the Astra isn’t sold in the USA. Is there a USA-sold car w/the same engine & basic configuration? Maybe somebody here has experience w/cooling system bleeding on that car’s engine.