This guy is really creative! 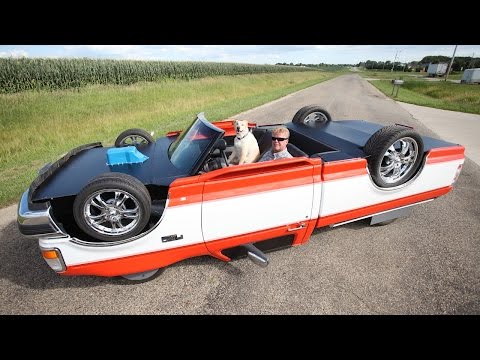 That is cool. Very ingenious.

Cool, but not unique! Behold the up side down race car.

Cool. He probably got the idea from looking in the ditches on the side of the highway after a snow storm.

I wonder, is it 8 wheel drive?

Brilliant idea and very nice job with the construction on the truck. I can’t even imagine how many questions he gets about that thing.

Regarding the race, I guess tire changes will be a lot quicker…

This guy is really creative
And has way too much free time on his hands.

And has way too much free time on his hands.

You’re just jealous…I know I am.

It’s probably illegal to operate. How could it pass inspection?

Has he done a “rollover test”?

"How could it pass inspection? "

Just out of curiosity, could you tell us why you believe that it couldn’t pass a state inspection?

Just out of curiosity, could you tell us why you believe that it couldn't pass a state inspection?

One thing noticed right away…no seat-belts. But many states don’t have a safety inspection.

I did notice that the rear seat had no seatbelts, and I did think that it was very irresponsible of him to be transporting those two kids in an open vehicle, sans restraints. However, some states may not even require seatbelts in the rear. The driver was wearing a shoulder harness, so apparently his state does require at least passenger restraints in the front.

And, yes, some states have no safety inspections.
In NJ, as a result of our Governor’s desperate attempts to cut expenditures (for everything except his nationwide travel schedule), our state inspection now consists only of emissions testing. As an inspector told me, “Even if somebody drives in here on 4 bald tires, has brakes that barely work, has no windshield wipers and no functioning lights, as long as they pass the emissions test, I have to pass them”.

However, some states may not even require seatbelts in the rear.

The wearing of seat belts is from state to state. But the law requiring the seat belt is federal.

Let’s hope it stays that way or nobody will ever be able to build a hot rod again.

You’re jealous…I know I am
I am envious of the talent and imagination displayed. It is entertainment though, which in itself, is still a good thing. But, for me, I have to see a need. But, if someone told me they were having a real bad day but it coaxed a smile from them when it sailed by, that would be enough.

I’d never build or own a vehicle like that…I’m jealous of the talent and imagination it took to build something like that.

But hey…if ya got enough money ? …

But hey…if ya got enough money
and the free time.

I wonder what makes the (upper) wheels turn? I personally wouldn’t have bothered with that.
The dummy oil pan is a nice touch.
The thing is really interesting, though probably distracting enough to actually cause accidents.

The guy must own the shop. That rig took a ton of money and a ton of time; something most mechanics lack…

What he needs is to slump down in the seat and have a pair of jean clad, workboot wearing dummy legs protruding straight up.