I see the old 8 pages of discussion on how to magnetize a screwdriver that George started is closed. I noticed in the Handyman magazine this month that they featured a screwdriver magnetizer for about $5 at home stores. It was just a little 2" cube that you put the screwdriver in and walla, a magnetized tip. Haven’t seen one myself but suspect it needs to be plugged in. For the person that has most everything except space.

Another tip is to get a package of those strong 1/4" craft magnets from Hobby Lobby. They’re cheap, powerful, and stick well to the blade; especially on square blade screwdrivers like Craftsman.
Also removeable if needed and can be used on wrenches or sockets to hold a nut in some awkward place.

As a scrapper, I have a lot of those “donut” shaped magnetron magnets. Brush a screwdriver tip actoss that, it’ll be good and magnetized.

@Bing
That little cube has been around for years, I got mine from the Matco tools driver (free) about 20 years ago. And they do not need to be or get plugged into anything. I saw it in Handyman too, isn’t it amazing everything old becomes brand new again and again and again.

Most auto parts stores have them. Often you’ll find them in one of those big jars up by the register. Here’s a link to one you can buy online if you can’t find one locally: 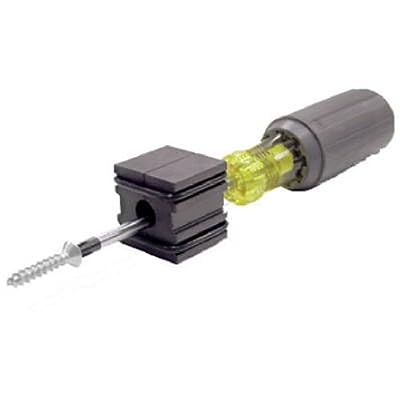 Yep, they’ve got those at Menards for about $3. I’ll have to take a look next trip.

Didn’t George start his post asking how to " magnify " a screwdriver?

If you wish to magnify a screwdriver, and have a smart phone, free magnifying glass is awesome. I hijacked an old galaxy 3 and installed it for my mom with macular degeneration. She loves it. Light goes on and mag app lets you take a picture if you wish. Now I do not have a lot of apps on my phone but it is one I use regularly.

Yes, “how to magnify a screwdriver” seems to me to be more consistent language useage. For example “how to electrify the lamp” makes more sense than “how to electrifize the lamp”, right? … lol

BTW, Soon after that long thread we had was completed, the same magazine had a helpful hint with the idea that gained the most acceptance here, where the easiest way is to simply attach a rare-earth magnet to the shaft of the screwdriver. So both Car Talk and the magazine agree, that’s the easiest way to magnify a screwdriver …

Neodymium (rare earth) magnets out of dead mechanical hard drives work great for this. They’re also good for a lot of other uses, such as refrigerator magnets if you need to stick a paperback book to your fridge

I got a couple of good donut magnets from old roadside flashing lights, the type used to warn of construction and such…

my son ordered some really powerful rare earth mags a few years ago. he sold them after they hurt him a few times…

I just bought one at Menards for $3. I really doubt I’ll ever use it though but it doesn’t take up much space and might bring something at auction.

Somebody in the prior magnetizing thread posted a tip that turned out to be quite useful to me later.

“Before assuming your screwdriver magnetizing technique isn’t working, make sure the screw is made of a type of metal that sticks to a magnet.”