I have a 2007 pontiac grand prix.
I recently drove my car cross country and almost as soon as I finished my drive my check engine light popped on and my car started to GUZZLE gas. Ive been told by one mechanic that looked at it that its my converter. When we ran the codes I got a p0420 code. While reading online of all the things that could be causing the problems the one about the MAF really stuck out. My car will idle rough, when started after being started for the day it will die out or go down and come back up, it drinks gas like teenager at a party. It also jerks when accelerating was told by another mechanic that there was a pinhole on something by my converter and thats why the code was coming on? The check engine light will occasionally go off for a few days to a week or two then come back on. Im not sure if it was the CC if that would ever go off. Im just trying to find a fix that may be cheaper than replacing the CC especially if it doesn’t need replacing. Its a CA emissions CC so the part alone is expensive and I’ve been told that I HAVE to replace it with that and I can’t use a universal because of it being a CA CC. Im just paying people to tell me different things at this point and both of these shops come highly recommended in my area

It is good to get another opinion but you’ve spent money at 2 or 3 shops with real mechanics telling you the cat needs replacing. You are trying to second guess the pros who have actually seen your car with un-vetted info from the internet?

I am going with the pros, you need a new cat. Yours sounds clogged, really clogged. You also likely also have a dirty throttle body and maybe even a worn out engine but we wouldn’t know that since you didn’t tell us how many miles are on the car.

But a MAF is cheaper than a cat so go right ahead and change it. But make sure you have enough money for a cat before your registration needs renewal.

If you’re guzzling lots of gas the converter is likely toast and the MAF would be a likely cause for that.

Forget about the MAF sensor for now.

was told by another mechanic that there was a pinhole on something by my converter and thats why the code was coming on?

If there’s any kind of exhaust leak before the converter, it can cause that code.

What are the Possible Causes of the P0420 Code?

A faulty catalytic converter is the most frequent cause of a P0420 trouble code. Common issues that can cause this OBD-II code include:

You might check the fuel pressure regulator to see if the diaphragm in it is ruptured. Remove the vacuum line and see if the hose is damp with gasoline. That will cause rough running and atrocious gas mileage and eventually foul the plugs/kill the converter.

This is what it looks like. The vacuum hose connects to the vacuum nipple in the center. They can be easily checked with a vacuum tester but my assumption is that you do not have one of those. 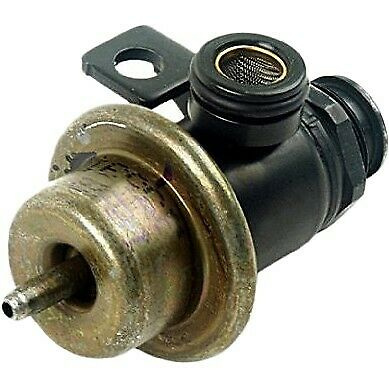