Most control arms I’ve seen come with the ball joint installed. If that car took a hit hard enough to break a control arm I would strongly suspect that the control arm is not the only thing damaged.

You can try replacing the control arm as a first step. Then take a tape measure and measure from the rear of the left front wheel to the front of the left rear wheel. The wheel; not the tire.
Then repeat the process on the other side.

If those measurements are off by a 1/4" or more then something else is bent and hopefully not the subframe. A quarter inch or less could be error in holding the tape measure so it is best done with some help to hold it firm.
Other potential problem areas could be the sway bar, strut, etc. Best of luck.

On 1995, good idea to replace the bushings at same time. Ask the folks who sell you the control arm if there’s a corresponding bushing kit for this job. Probably around $100.

Be very careful, forces involved can cause car to fall from lifting apparatus. Will need front end alignment after, so replace everything you think needs replacement so don’t have to do the alignment twice.

Do you have Mercedes recommended written procedure for this job?

No ball joint in the control arm.

And the control arm comes with new bushings. 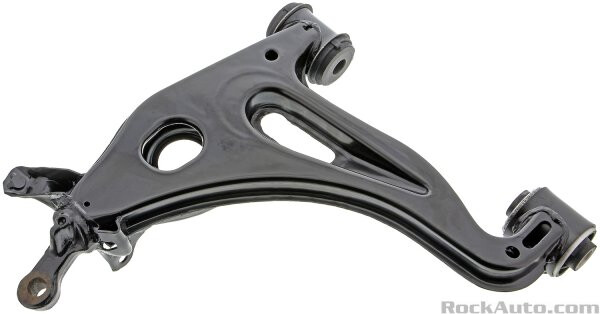 It’s a Benz so I guess they want to elevate the price as much as possible. AutoZone shows a lower ball joint at 150 dollars (double ouch) with a few others at 83 (ouch) and 29.

It’s difficult for me to see a control arm like that getting sheared off and not damaging something else on the way out. Subframes are going for a lot less than I figured; as in 3 to 400 dollars. It might be time to drag out a tape measure and start taking measurements at certain locations to see if or how much out of square the subframe is. Knock on wood…

A few days ago, I saw an A-Class Mercedes for the first time.
In my opinion, it looked no more expensive/exclusive than a Corolla, even though it is probably a lot more expensive.

Mercedes Benz has only sold the A-series sedans since 2019 in the US. In the home market they have sold A class vehicles for a lot longer.

I think of the C as the cheapest ‘real’ Benz. What few new ones I could find in stock are $45k-$50k. I hear they’re considering axing the A and B.

… but they must not have sold many of them, at least in my area.
Daily, I see multiple Porsches, one or two Maseratis, and more Teslas and BMWs than you could shake a stick at, but the A-class that I saw recently was the first one that I was aware of.

Mercedes … looked no more expensive/exclusive than a Corolla

Not sure these days, but Toyota in the past seemed to model their Corolla’s appearance based on pretty obvious aspects of Mercedes styling. My early 90’s Corolla has definite appearance similarities to one of the same-era Mercedes sedans. Exterior, not necessarily interior.