Lots of classic T Birds for Sale in My Area

I see a lot of 50s, 60s and 70s T Birds for sale online and most are at reasonable prices. Any guesses why so many are for sale. Do older T Birds have some problems…more than other cars from that era?

No more than any other old vehicle . Since we don’t know where you are it maybe that some Thunderbirds sold quickly and other collectors are just ready to change their inventory.

I like the 50’s styling. I wouldn’t consider a 70’s T-Bird collectible.

The C1 Corvette design was a direct competition to the T-Bird.

Rust is your biggest issue.

Lots of folks who collected '50s cars are ‘aging out’ of the hobby, so they’re selling their cars. As for T-Birds in particular, the ones you see now are often heavily-optioned, which means lots of stuff to keep working. But they’re pretty typical for the era - look great, handle like a boat.

But they’re pretty typical for the era - look great, handle like a boat.

I saw a beautiful 50’s retro-mod T-Bird. Much bigger engine. Independent suspension…disc brakes…etc…etc. And a 6 figure price tag to match.

The 55-57 Thunderbird’s had a spike right around the time the new T-Bird came out for 2002 but the next generations of collectors want newer toys for the most part. Unless restored by a particular shop to a very high standard. But even the 2002 and newer have hit their “just used cars” period where you can get a nice driver for $12,000 or so.

Except for the sports roadster the 60’s Thunderbirds were never as desirable as the first years but still cool. Buy the one you like.

My first car was a '58 Thunderbird. Really, the biggest and only car buying mistake of my life. The 55-57s are pretty cars. The 58-60 not so much since they had a rear seat. And for a 300 HP 352 it was a total dog.
Best thing that ever happened was the rear axle housing snapped in two right near the ring gear one day. Otherwise I might have kept that abomination for a while longer.

The only t-birds that I would call classic are 55,56,&57. The later ones are simply Fords with.some extra gingerbread.

Then you need to drop by this shop, it’s not far from me:

I met Amos minter many years ago when I briefly owned a '56. Horrible little car, but very pretty.

Different strokes for different folks.
I happen to like the 58-60 square birds. But they are not on my most desirable list. I only drove a squarebird once, yes the 352 was inadequate.
A couple of comments though. T-Bird was introduce as a result of the C1 Corvette.
T-Birds were separate line from other Fords, for one, T-Birds were unibody will full size Fords were body on frame, the 55-57were body on frame.

A friend in CA whom I used to tool around with out there had a 62 T-Bird convertible. White with red interior and a lot more gutsy as it had the 390 in it. The Bullet Bird is what I called them due to the design.

The ugliest has to be the late 60s 4 doors with the Landau roofs and opposing doors. They call it luxury; I call it a hideous pimp wagon.

I put some miles on 55-57 Birds back in the day. The 55s were hot for their day and good handling for their time and pretty quick with solid lifters. In 56 Ford de-emphasized racing softened the suspension and hung a heavy continental kit on the back and then add 70 pounds of reinforcement to the rear frames because they were cracking. If you went into a curve or corner too fast with a 56 you were going off the road backwards. In 57 they were back to being a great little car.

Everybody thinks the Corvette walked all over the T-Bird in the early days but the 55s were pretty close with the performance edge going to Ford.

The 53 - 55 Corvettes were great looking cars but the 53 and 54 only had 6 cylinder engines and the build quality was terrible. There were no roll up windows, just side curtains that leaked like a sieve.

By 55 when the Corvette got the V8 buyers were completely turned off by the cars reputation and they only produced 500 of them.

The 58 and newer T-Birds were overweight pigs, heavier than the full sized Fords which is why the performance was so bad.

As long as we are talking about 50s Fords and Chevys, the 57 Chevy has become THE 50s Icon. But it was not well received in 57 and was the only postwar year that it lost the sales crown to Ford.

In case anyone thinks I am just a Ford fan, I have never owned one although my kids dragged home a few Pintos and a Maverick because they were cheap.

What prompted this question and what sites are the ones who seem to have a lot of Thunderbirds .

Chuck , what did you do about the holes in your vehicle from your other thread ?

You folks make me kinda glad I didn’t win the raffle for that fully restored 57 Bird in Boston. Worth the chance though for $100. Supposed to be only 1000 tickets sold for the fundraiser but they only sold 500. But a guy down the road a piece in Worthington, Minnesota won it. So after the virus settles I’ll swing by there to take a look at it sometime on my way to Dakota.

A 57 T Bird is one of those cars that I admire but have no real desire to own one, they are great cruisers and unless you have to have the rare motor 100 point restoration there are some great drivers for reasonable money.

A 57 T Bird is one of those cars that I admire but have no real desire to own one, they are great cruisers and unless you have to have the rare motor 100 point restoration there are some great drivers for reasonable money.

I’ve always loved the C1 vettes. Love the style. To get a good one that’s been through a retro-mod in good condition is over $100,000 (well out of my price range). That C7 vette I drove a few weeks back is looking better and better.

My 59 Corvette. That is not me in the pic. It’s the guy I got the car from. Gray with silver coves and red interior. 283 with dual point distributor. 4:11 Posi gears, and traction bars. A real hoot to drive; or was up to the point it broadsided a pickup. 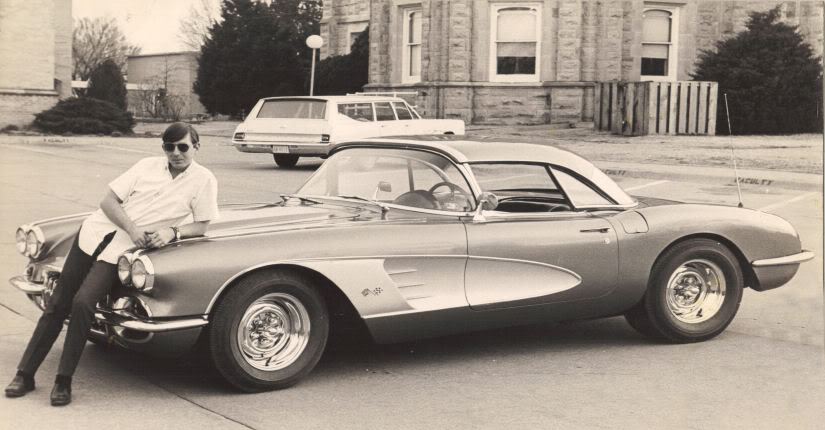 Was it tubbed to fit those wide shoes on it?