Just bought a Ford and noticed this in the service invoice

I went through the service history book and along with that it had an invoice from 2021 where it had a big service and what they did exactly. Ive uploaded a pic of it so should show below.

Basically During the full service they also changed the spark plugs as they noticed the car was only running on 3 out of the 4 cylinders.

I’ve read online that this can damage the piston rings / engine and also the catalytic convertor?

It’s hard to tell how long the previous owner was driving it like that… it’s since had another service by a Ford main garage 2 weeks ago.

It seems to be running perfectly fine but I’m
Just worried in the future I could come across problems with the engine. Was really expensive car for me anyway with the current value of second hand cars. 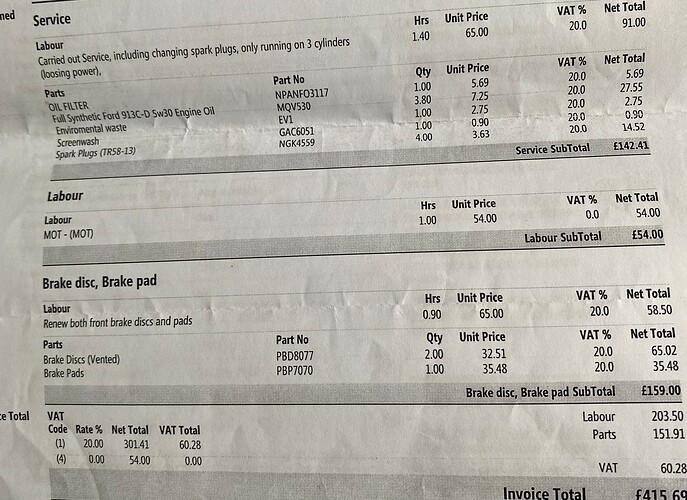 If you are really concerned, you could do a compression test. It seems that could be a concern, why did the plug fail? Maybe it will be fine, I would not raise my blood pressure too much about this.

Not sure. Maybe the spark plugs were never changed?

Ooo ok. I could ask a garage to do that maybe.

Not sure. Maybe the spark plugs were never changed?

According to Ford, the spark plugs in your car shouldn’t need to be changed until you’ve reached 100,000 miles. Perhaps one was defective.

IF the car was doing that, a yellow check engine light would be on informing the previous owner the car was in need of service. The fuel consumption would also be poor adding further encouragement to the owner to service the car.

Don’t worry about it.

You must be in the UK. I’m not sure whether you Engine Management System operates the same way as the US On Board Diagnostics system does. In any case, it does appear that a previous owner did note a problem and had it checked because the top note says it was running rough. After checking, the shop replaced a spark plug and the problem went away.

The MOT it received before transferring the Fiesta may not have checked for possible damage in the cylinder due to the malfunctioning spark plug. As mentioned above, you could have a compression test done to see if all cylinders have similar compression. The shop could also use a borescope to inspect the cylinder side walls in the one with the bad plug. It isn’t clear that you have any recourse if there is something unusual found though other than repairing it at your expense. If it runs well, maybe you should just drive on.

@stevenstrong2839_181065 I also see no reason to worry about the plug change . It would be good to look in the service schedule for when the timing belt needs replaced . That will be in miles or months .

I bought a 4cyl car with front facing plugs. You could change a plug in about 15sec. There were pieces of broken porcelain lodged in filthy front edge of head. How did the monkey tech break plugs while removing them? Should I have been worried about ham fisted techs?

Yeah the timing belt was done by the Ford garage I bought it from 2 weeks ago.

It runs perfectly ! But could be a good idea doing the compressor check.

I’m sure the Ford garage would have checked the engine before buying it from the customer. (You’d think) haha

A. Misfire could damage the cat but seems to me this was so long ago you should not worry about it. To do a compression test, the plugs would need to be removed again with potential damage to the wires, coil? Then our the old plugs back in? It’s not a new car. I would just leave it alone and enjoy it but as usual change oil every 5000 miles, and monitor for any unusual oil usage. Would you want to do exploratory surgery just to make sure you are not sick? Be happy.

I personally would watch my oil consumption carefully for a while. If it is not excessive, I would stop worrying, especially if the engine is not running rough.

There were pieces of broken porcelain lodged in filthy front edge of head. How did the monkey tech break plugs while removing them?

By exerting some sideways pressure on the socket and extension

It’s not that uncommon

Not to talk about my childhood again but on one of my first spark plug changes, got the socket a little skewed and broke the dang plug. Back to the gas station to get another. Yeah it happens.

Yeah the timing belt was done by the Ford garage I bought it from 2 weeks ago.

Are you sure it was the timing belt and not the serpentine belt. 45000 miles and 8 years seems soon for a timing belt .

Yeah it’s definitely the cambelt. They stamped it in the cambelt section of the service book. Was done at the Ford garage

The expression “Running on 3 cylinders” could just be an aphorism, meaning the engine wasn’t developing the expected power. During the big engine 8 cylinder American car era, 1960’s/70’s, I’d hear the expression “not running on all 8” all the time, often unrelated to cars. For example: " Harry got several C’s and D’s on his last report card. Something must be wrong, lately he hasn’t been running on all 8."

If a cylinder wasn’t working at all, it could be any of these

No gas injected on one cylinder would cause a misfire but wouldn’t damage the cat. No spark on one cylinder could damage the cat, depending on how frequently this happened and the duration. When there is no spark in one cylinder, the injected raw gas is just pushed out into the cat on the next exhaust stroke, which eventually will damage the cat. But if this was severe enough for cat damage it would usually post a misfire code & turn on the check engine light. I expect if your concerns remain, all you have to do is a compression check. If the compressions are all within 10-20% of each other, and the engine runs well, I’d guess you are good to go; i.e. whatever the cause of the “running on 3 cylinders” comment, it didn’t cause serious damage.

Re: Ford Fiesta. I’ve always liked that car myself. By the reports here Fords are pretty reliable powertrain. The two most common problems on Ford sedans by the reports here seem to be with the EGR system, in particular the DPFE gadget. and with their dual clutch automatic transmission.

Thanks for the reply’s