Is an IVT significantly different from a cvt?

Is it more reliable, Although it is very similar to a Continuously Variable Transmission (CVT), IVT is said to be capable of reproducing the shift pattern of a manual transmission, making it feel more responsive. Designed and built by Hyundai Transys, IVT ditches the conventional metallic belt in favour of a chain belt.

Since it’s new, nobody can know how reliable it’ll be, right? Never heard of it.
edit-looked it up, sounds just like one of several CVTs out there that mimic gear changes by modifying the ratios. Looks like a CVT, too: 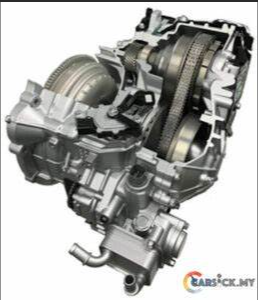 Know 3 people who bought Kia Soul’s with the IVT transmission, two of them had problematic transmissions and were bought back either by the dealer or Kia. #3 only logged 5,000mi on a 2yr lease and was decent. Haven’t looked to see how these transmissions are doing overall.

I looked at a couple of articles about the iVT transmission, but can anyone define “chain belt”?

Looks like the “belt” resembles the Subaru Lineartronic chain rather than the JATCO belt.

As for mimicking a traditional automatics feel, it just sounds like more sensors and more complicated computer programming

An IVT is a CVT. It’s just programming. So many people think their CVT is slipping when they add throttle and the RPMs increase smoothly, like a slipping clutch. The IVT shifts suddenly into the lower gear ratio giving you that kick in the rear feeling of a geared transmission downshifting.

The CVT will also change engine RPM a little at the slightest increase in pressure on the gas pedal where an IVT will hold the same ratio unless there is a significant increase in throttle pressure.

Personally I like the CVT on my Subaru. It is one of the few things on that car that I actually like.

Edit: Subaru went with the IVT the next MY after my Legacy, but still call it a CVT.