Is a new engine really the best solution?

The editor of Hot Rod magazine is restoring a Chevy C10 pickup, and recently installed the rebuilt engine, when he ran into unexpected problems, which he describes in an interesting article in the attached link. In short, while repairing the carb, unbeknownst to him, a small check valve from the accel pump nozzle fell out & into the V8 engine. A valve & piston were destroyed, and the head suffered some nicks. No damage to the block.

His solution was to buy a new engine. This seems like an extraordinarily gonzo solution, given the engine damage was only to a few inexpensive parts that are relatively easy for a knowledgeable mechanic to replace. Or is there more to this, something that would justify installing another engine? 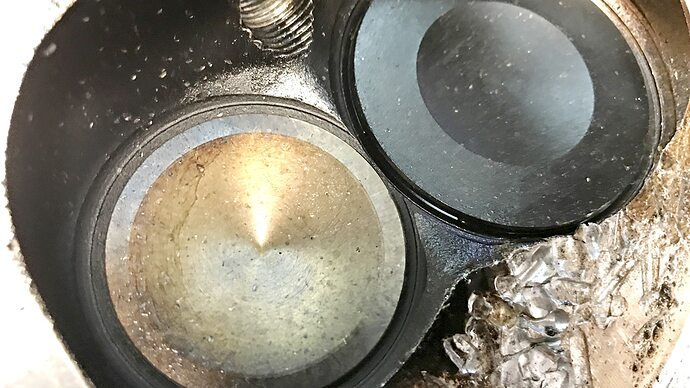 How to Destroy an Engine with a $6 Part

It doesn’t take much to ruin an engine. Just a small lapse in judgement and a small foreign object can cause catastrophic failure.

Blueprint Engines offers a 350 SBC starting at $3700. It probably would have cost more to repair the engine he trashed.

I am struggling to see how it would cost anywhere near $3700 to have a machine shop repair the engine properly, let alone to do a “band-aid fix” that would allow it to run “adequately”.

On a valuable or restored vehicle, I’d be inclined to pull the motor and have it rebuilt by a professional machine shop. On a daily driver, I’d have pulled the head, rotated the nicked piston up to the top, cleaned up the nicks by hand with fine-grit sandcloth, rotated the piston down to the bottom, cleaned up any nicks in the cylinder bore with 1000 grit crocus cloth, and of course, had the cylinder head repaired and resurfaced or purchased a remanufactured head.

It might burn some oil and/or have a slightly unbalanced idle as a result of this type of repair, but on a low-value car, as long as it runs adequately and passes emissions, who cares? The trick, of course, is to prevent any abrasive material from falling down into the rings, and Vaseline works nicely for this.

I worked with a guy who completely refurbished a Nissan Patrol (anyone remember those? Kinda rare around these parts). He accidentally dropped the wing nut off the air cleaner stud down the carburetor, screwed up the engine, and abandoned the project.

I just looked at Nissan Patrols on Wikipedia. Apparently they produced them for quite a while. His was either a second or third generation.

If that were my project truck, I pull the engine, send the head out to pressure test it, replace the intake on #8, touch up the valve seat, skim the surface and send it. Likely cost $300 maybe.

The article said the bore was OK, so buy a new piston, use the same rings back in it goes. $100.

Reassemble and reinstall. Way less than a couple thousand as the article says but I trust my own work. Many don’t.

Lesson learned: Don’t fiddle with the carb squirters while it is ON THE ENGINE! Take it off, work on it on the bench.

I would have the head serviced, one new piston since the bore is good, and reassemble it.

He said that the engine company offered a new service engine at a “pretty good discount” so I wonder exactly how much that means. If half price that might be the better option.
Repair the damaged engine and sell it.

Long time ago while coming home from work late one night (middle of winter and starting to snow) on my Harley I saw some flashing lights. Turned out to be a late 80s Blazer with 2 women who said the engine was running away and would not idle down.
My pocket flashlight showed an aluminum plug in the throttle body bore and it was wedging the butterfly open. They said it had just been worked on that day.

I asked and one of them had some gum so I found a 10" stick on the roadside and managed to pry the plug loose while chewing the gum. Then used the gum on the stick to remove the plug. No idea what it was for or where it came from but it did not go into the engine because there was a screen between the manifold and throttle body.
Told them to hang onto it and next trip in have the shop look at it as I suspect it was a part from the TB. Engine sounded fine though.

David Freiberger is editor in chief of Hot Rod Magazine. A coworker, Mike Finnegan, has said that Freiberger changes engines in his cars more often than Finnegan changes underwear. If the boss loves changing engines, then his employees must be encouraged to do the same. If Freiberger tells McGann to buy a new, very cool engine, you better believe he will spend the boss’s money just the way Freiberger wants.

I got the impression this is McGann’s own truck and spending his own money. If he had access to the company’s money and blessings would he not go for a stroker SBC or a BB Chevy, and dump the carb for TBI?

Interesting comments above. My theory, the motivation for a new engine is more psychological than anything else. I’ve fiddled for hours with mechanical gadgets, mostly just to see if I could fix them. If the fix takes, good enough. If it doesn’t, I generally just buy a new one. I don’t want to admit to myself I couldn’t fix it on the first attempt. If I can get a discount on the new gadget, even better

Sometimes the easiest solution is the most expensive solution. The only reason he went with a new engine is because he didn’t want to run into any more unforeseen problems. Buying a new engine lowers the risk, but drastically ups the cost.

I wonder if he got a buddy price by mentioning Blueprint Engines in the story. Product endorsements can be paid for with money or lowered cost for components or services.

The engine being removed is likely a very good one. Might last for 250k miles once its repaired. This is a highly-experienced mechanic who had just entirely rebuilt the engine. Part of the discount may have been in exchange for its return.

David Freiberger is editor in chief of Hot Rod Magazine. A coworker, Mike Finnegan, has said that Freiberger changes engines in his cars more often than Finnegan changes underwear. If the boss loves changing engines, then his employees must be encouraged to do the same. If Freiberger tells McGann to buy a new, very cool engine, you better believe he will spend the boss’s money just the way Freiberger wants.

JTS, just curious since you seem to have some connections at that magazine, do you know Marlin Davis’s status? Tech Editor for Hot Rod. In the past few issues his articles seem to have gone missing. I’d guess he knows more about the technical aspects of cars than almost anybody, and his articles were always the magazine’s high point for me.

No, I don’t have connections. I watch Road Kill and Engine Masters. The stuff I mentioned was talk during those shows.