The National Highway Traffic Safety Administration (NHTSA) has revealed that the driver of a 2006 Ford Ranger pickup was killed in a June crash because of a defective Takata air bag inflator.

While details about the crash are limited, Ford says that it had sent more than a hundred notices to the owner’s home for the recall while also sending multiple text messages. The car manufacturer also had a canvasser visit the home of the owner to try and schedule for it to be repaired.

And yet, the unidentified owner of this vehicle failed to avail himself of the free repair. 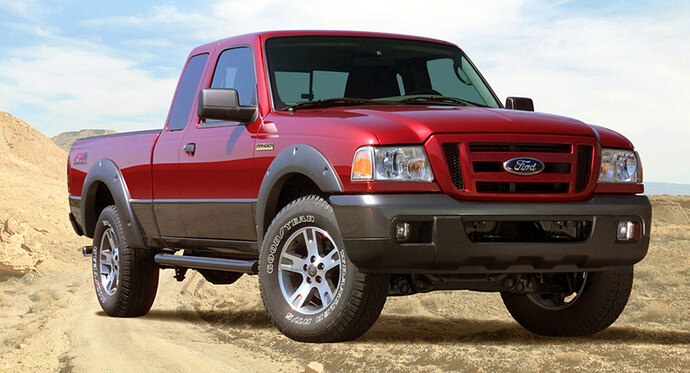 Ford Sent Over 100 Notices And Even Visited The Home Of Ranger Driver Killed...

Ignorance can be cured… but you can’t fix stupid.

Does anyone else Doubt this story? I have never ever received more than one notice of a recall and one was for an air bag. Plus their ownership info normally would not include a phone number to send a text to, plus a live body knocking on the door? Two or three maybe but 100, and none sent certified to prove delivery? I even send every letter to the irs certified so I can prove who got it and when. Certainly ford is off the hook anyway but fish start to smell after a while.

Does anyone else Doubt this story?

I does seems hard to believe Ford would (presumably) mail 100 notices to same address, one after another. I mean once the notice wasn’t responded to after 2 or 3 times, why keep mailing more notices? What would be the point? Ford hiring someone to go to the homes of non-respondents, that seems possible in a safety related issue like this. Me, I have difficulty getting large bureaucratic agencies to respond at all, even just one letter simply acknowledging receipt of my query, when I write asking about something.

I’m guessing owner didn’t respond b/c was worried truck would get stuck in queue, awaiting parts, truck held by shop, and couldn’t be used.

I replaced a Takata airbag this month, parts have been in stock for 5 years.

Manufactures are required to make a contact attempt and NHTSA report quarterly. Vehicle manufactures have a staff to send notices and make phone calls. 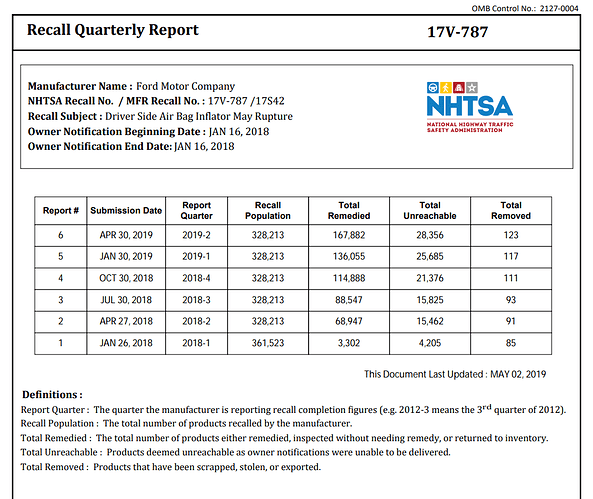 Nice report but updated in 2019 and sent to someone from the feds concerning ford. But I can see how they could just churn the numbers to make the report look good. Still why no certified letter? Still I don’t fault ford at all if they just sent one, two or three postcards and then gave up. Do those California safety inspectors check for recalls as well as washer fluid?

My 03 trailblazer had the Takata airbag, never recalled.

I believe it. My son has gotten close to a hundred for his Nissan, along with a dozen or so phone calls. The car has a blown head gasket and he hasn’t gotten around to fix that yet, the car is not driven.

Our Acura had one recalled so not all bags were recalled. So maybe the 100 is accurate. They couldn’t resell our Acura until the bag was replaced so they had a whole lot of cars they couldn’t sell. My apologies to ford if they really did this. Might need a different approach.

No, when the part is in stock, you make an appointment. My car had both driver and passenger airbags replaced, only a couple of hours for each.

No annual small-passenger-vehicle safety inspections in Calif in my area. I’ve never heard of them being required anywhere in Calif. Calif politico’s worry is apparently vehicle emissions standards rather than vehicle safety.

+1
Ex-NJ Gov Chris Christie eliminated all safety checks, and ever since his reign, our inspections have consisted solely of an emissions check. To quote one inspector, “even if you drove in here with no windshield, inoperative brakes, and 4 bald tires, I would have to give you a passing inspection sticker if your emissions were okay”:

In VA they don’t specifically check the fluid, but if the inspector attempts to operate the washer and nothing sprays, you fail. The inspector is not required to find out why, just has to verify it doesn’t spray.

Do the police (local and state) stop cars they encounter with safety violations? They do in MD. Many members of the state legislature wanted to institute annual state safety inspections. As you might expect, many legislators did not. The compromise was to authorize police officers to stop anyone whose vehicle had a safety violation and issue a warning. The warning requires that the cited driver have the violation fixed and present the car at any police station to verify that the problem has been fixed. The officer signs the warning and the violator sends it to the state within about three weeks.

These are called fix it tickets and think fairly universal among the several states. Things like lights out, cracked windshields, loud exhaust, etc. if heard or seen for probable cause. Minnesota… does and I know Iowa does. Not washer fluid though and windshields have to be extensive affecting vision. In my experience mufflers might be a little loud but can’t crackle and pop.

Got pulled over once, bogus tail light out, just a warning, work van at airport dropping off people, got a warning the backup lights not working, never got a fix it ticket.

I can’t speak for CA but around here they do. The inspection report includes any outstanding safety related recalls that have not yet been performed.

Back in 1975, my wife received a Recall Notice on her 1967 Pontiac Firebird’s “Space Saver Spare Tire.” The spare tire came uninflated and kind of collapsed with the side walls folded in. With the jack was a pressurized steel bottle with a short nozzle to attach to the value stem to inflate the tire. She had sold the car a year or so previously and we never guessed how they were able to contact her. She bought the car before we were married in NY and it was registered under her maiden and she was probably the 2nd or third owner and we now lived in Arizona. Back in 1975, there were no computerized databases and it must have been a “Hand Sort” type search and a real heroic effort…

Ex-NJ Gov Chris Christie eliminated all safety checks, and ever since his reign, our inspections have consisted solely of an emissions check.

My previous car was a 1999 Chevy Monte Carlo (3800 V6). Eventually there was a recall for a plastic part around the forward valve cover. (It secured the 3 spark plug wires). Very often the cover gasket would leak oil, the oil would cover the plastic part and start a under hood fire. The fix was to remove the plastic part and do something else with the wires.

I fixed it myself. I started getting the GM red post cards warning “Bring it in now, you might have a fire!” I probably got 20 or 30 of those things! I eventually sold the car to a young kid. I told him about the recall and what I had done.