I need to do a little investigation

As the local king of weird ideas, I would like to get some input from you clever guys.
I have a long time wondered if an ICE engine could be made with just 1 (one) valve per cylinder. That means - that one valve should work as both inlet and exhaust.
I would like to see if it would be possible by making my Morris Minor the victim of the experiment. The idea is to get valves big enough to only leave space for a relocated sparkplug. That would raise the valve size considerably and you can’t get to much breathing in an engine. more hp may even be possible. It should work via a “fork” like rocker by the push rods and the intake and exhaust could work through dual ports with a vacum operated intake 1-way valve and a pressure operated 1-way exhaust valve. It might even eliminate the risk of a burned valve as the valve will be cooled on the intake.
What do you clever guys think, is this a feasible idea?
I’ve got the valves allready. 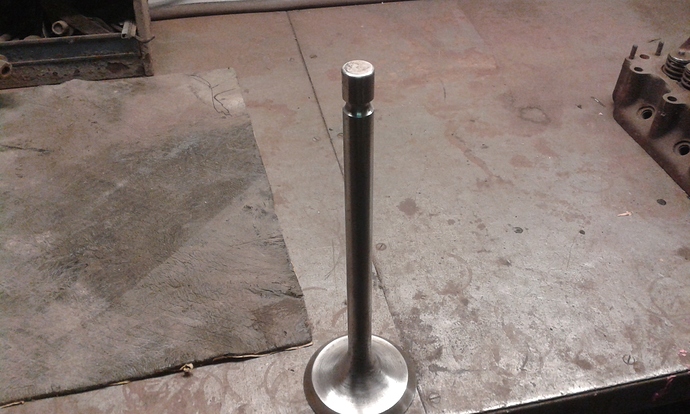 So you want to add 2 more valves to eliminate 1 valve ?

No, replace 2 valves with one.

Sort of, but they wouldn’t be placed in the combustion chamber and would not draw power from the valve train. Besides you have to separate intake and exhaust in some way and would include fewer mechanical parts.

Cars used to be built as you describe. An intake valve with a light spring that opens by sucking in the intake air and fuel.

That technology was abandoned as rpm and horsepower increased. You lose any rpm capability since the intake valve will “float” or not close quickly enough to allow the compression stroke. The valve timing is also very short so the engine won’t develop much power.

As a side note… any power lost to compressing the intake valve spring is recovered when the valve shuts so no improvement in efficiency.

You might take a look at rotary valve engines if you want to eliminate valve springs… See pic below. 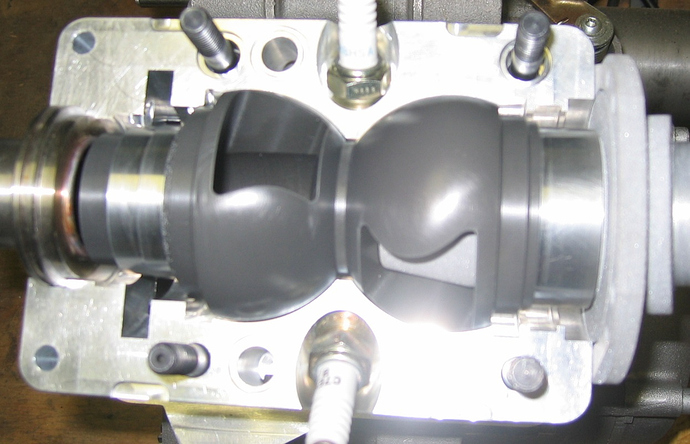 I am intrigued by your experiment, but that valve will have to be nearly as large as the cylinder and dip pretty far in order to give you more breathability than four valves. Will it be an interference engine?

Well. I have to admit defeat and it seems I failed miserable, but - after all - it is the first of April.
I was sure the pic of that valve, which by the way comes from the engine in a smallish coaster, and the corner of a cylinder head from a car in the background would tell the truth about the crazy story I told.
Sorry for any inconvenience.
Btw. I AM the king of weird ideas in my neighbourhood. At least that’s what they tell me.

The Sopwith Camel engine used 1 valve per cylinder I believe. Monosoupage as I recall.

asterix- You got me too, I was crafting a reply involving F head engines when I saw your last post.

Please please don’t mess with your Morris Minor. Instead you can get a brand new ICE from Harbor Freight for $100 to experiment on. I’m sure you have something similar there or someone will ship you one.

What about a 2 cycle engine? I don’t think they use any valves in the engine at all. The downside is they use the crankcase for routing the fuel and exhaust gasses, and so the oil to lube the mechanisms have to be introduced some other way. Oh, and 2-cycle engine probably wouldn’t be able to pass emissions testing.

Harley Davidson used a vacuum operated intake valve back in the early 1900s. It did not work particularly well and was soon replaced with cam operated valves a couple of years later.

As a former Morris Minor owner I salute you; or offer condolences…

As a former Morris Minor owner I salute you; or offer condolences…

As You might have discovered by now, it was an attempt to make an April fools joke, but I think I failed.
With Your last sentence, I’ll take the salute, but think the condolences should be directed at my Minor’s and my -71 Audi 100 Coupe S.

Even though I keep service and maintenance at top level, I demand A LOT from them so they often takes quite a beating, so a repair or extra service is not uncommon.
The Pick-up has covered a tad over 400k miles since I took ownership in -91. Or was it -92. At least I know that if I want to get rid of it, I’ll have to apply for a divorce.
No, i don’t have a wife.

I for one enjoyed your joke and laughed my head off in the middle of crafting a serious reply.

And that was the whole purpose with the story. Glad You had some fun with it.

middle of crafting a serious reply.

How about posting that reply? I’m curious.

Well you posted a question about using a huge valve almost the diameter of the piston.
Such a valve was possible with an F head engine.

They had a single overhead valve and a side valve exhaust in the block.

Hudson used such engines in the twenties to get excellent power for the time and jeep used some in the 40s and early 50s.

What killed them was the improvement in octane rating of gasoline because they had a large combustion chamber volume that you couldn’t get high compression ratios.

I do wonder is turbochargers could bring them back.

Hudson used such engines in the twenties to get excellent power for the time and jeep used some in the 40s and early 50s.

And then Rover adopted the system and used it until (around) mid ixties in the 3,0 liter P5.

Until I googled it I didn’t know the Kaiser Hurricane engine was produced until 1971 in Jeeps.

Wikipedia also said the the six cyl. Hudson F -heads were made from 27 through 29 but I have seen 2 different 26s at local car shows.