While it isn’t taught in school, it is allowed, and under some adminiatrative mandates in some school districts urban slang is officially recognized as a language of its own and accomodated. I think it’s a travesty, a deraliction of the primary and secondary schools’ mandates to allow and/or officially accomodate poor English skills.

I know you and I have discussed this subject before. I believe we’re both upset by the low level of English skills typical of too many high school graduates. We differ only on the part that official policies have played in this deterioration of skills.

I also want to emphasize that the comments are not directed toward those for whom English is not a first language, those who are struggling to learn and to communicate. It’s important to recognize that many of our posters fall into this category, and to respect that they’re trying to breech a language barrier. Many of these people, people from coutries like Laos, Cambodia, Viet Nam, South African countries, and many others may not even have been taught to read and write in their native languages, and English can truely be a struggle for them.

I’m not sure it’s as bad as all that. Sure, txters write like morons. That’s actually partly the phone company’s fault - - in the bad old days of txting, txt messages had a character limit, and each txt cost you money. So if u wrot lik dis you could cram more words into a txt and save yourself some cash.

There’s also the issue of small keyboards. I use a Moto Droid myself, which has one of the nicer smart phone keyboards out there, and it’s still a royal pain to use. In causal txt’s, I do find myself using “u” from time to time, because believe it or not, typing “you” can be a pain when you miss the tiny letter and end up with “yoi” or “toj.” Now you have to hit delete, which is right next to “M,” leaving you with “tojm,” which gets auto-corrected to “tonnage,” and now you have to hit delete even more.

The trouble is, and I think this only happens in a certain subset of the population, some people don’t draw a distinction between txting and regular typing. For several years the story of the kid who supposedly turned in an English paper typed in txt shorthand has floated around. Even if that story is true, I don’t think he represents all, or even the majority, of students today. At least, I hope he doesn’t, because otherwise we’re doomed.

My oldest son used to grade papers for college students and he said a fair number of them were turning in an essay or thesis written with garbage like that.
They were handed back with instructions to translate them into real English.

Sure let me cavetch about ebonics. An initiative in San Bernardino County aims to bring Ebonics into the classroom. The pilot program will teach second, fourth and seventh grade students about black history and culture.

An initiative in San Bernardino County aims to bring Ebonics into the classroom. The pilot program will teach second, fourth and seventh grade students about black history and culture. Mary Texeira, sociology professor at Cal State in San Bernardino,...

Ah, yes, the three letter word commonly referred to as the TETRAGRAMMATON (Greek for "having FOUR letters).

I agree with you that we should exercise patience with folks whose native language is not English.
In fact, I think that most of us have only “piled on” posters who are clearly native speakers of English, but who choose to use our language incorrectly.

When I was still working in the education field, I never ceased to be amazed at how quickly our immigrant students–largely from China, Korea, The Philippines, and India–struggled only briefly with English, and in very many cases were among our highest scorers on standardized tests of English within just 3 years of their arrival.

As one of my former colleagues used to say, “The American Dream still works–if you are willing to work to achieve it”. Unfortunately, in so many cases, it seems to be native-born Americans who squander their years in school and exit with barely adequate skills, while their immigrant classmates leave them in the dust, so to speak.

That’ll be fine, once you learn to spell “kvetch” and capitalize “Ebonics.”

You beat me to it, Whitie!

Also, the report of this “initiative” is apparently at least 5 years old.
I would be very interested in seeing a recent report of the existence of this program. Something tells me that you wouldnt’ find anything of recent vintage, and that this stupid concept died an early death.

In the case of the Philippines and India, English is one of the official languages. Chances are your students had studied it in school.

I know a guy on another forum that’s roughly my age(30) that English is his THIRD language, and he’s more fluent typing in it than some who have it as a FIRST language.

Oops…left out one consonant as well! “YHWH” not “YWH”. You are correct.

I know I’m fairly liberal with my uses of the words “kinda” “hafta” “gonna” “shoulda” “woulda” “coulda”. But, atleast I know the differences between there, their, they’re, your and you’re.

A question about a cultural aspect of a phone conversation with a English speaking person from India. I ask about India as people from India provide a lot of technical support to the U.S. My question concerns how to end the conversation. Is it a part of Indian culture to see how many times you can say “Thank You” and “Good Bye” in every possible variant before you are allowed to end the conversation? What I wonder is if it is the American headquarters that gave the Indians the idea that this is the way Americans like to speak on the phone. It seems to be a test of wills as to who will break first and just hang up.

The reality is that many folks now access the internet via phones. The phones have small keyboards and they have learned language shortcuts. I really don’t see anything wrong with the practice. If you have a car problem a phone could be more convenient than trying to find a WiFi hot spot to use a computer.

You are welcome, thanks for proving mine.

So When Did It Become A Convention To Begin Asking A Question With The Word “So” ?
So Like I Know Lots Of Questions Lately Begin That Way, Right ?

English is taught in both India and The Philippines, but the level of competency of the instructors is…not usually very good…unless one attends expensive private schools.

However, because these students were so diligent, them were able to excel within just 3 years or so–in most cases.

I see that we share that annoyance, CSA.
It is indeed now commonplace for younger folks to begin an essay, or a letter, or a question on this board with, “So”…as in…“So I own a 1998 VW”.

If one was in the middle of a story, or in the second or third sentence of a post, this might be appropriate, but beginning with, “So” is just so…incorrect.

It’s all a part of the dumbing down of the USA. Keep in mind that some must stay smart to make the electronic gadgets that permit the remainder to be dumb.

I may be a little cranky too because I had to study English and now it is not so important. I want people to spell correctly so I get my money’s worth as a taxpayer! 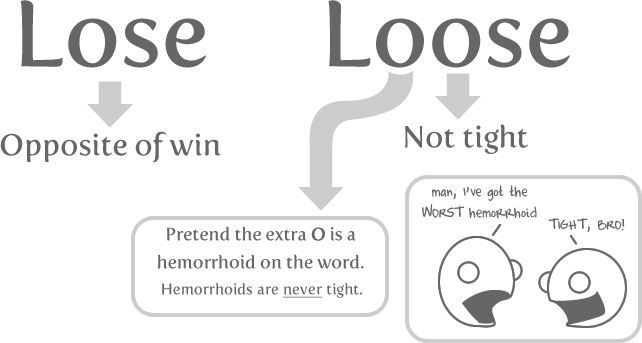 10 Words You Need to Stop Misspelling - The Oatmeal

I created a handy guide for common spelling errors. A panda bear makes an appearance.

Cell phone text shorthand is something that very remotely approaches Morse Code so it has its purpose.

PS, Noone is just stupid and I see that often. It should be spelled no one or better yet, nobody.