A man in Missouri recently had a turn signal lever surgically-removed from his arm, after it had been embedded for over 50 years.
This scenario resulted from a major accident with his T-Bird, many decades ago. 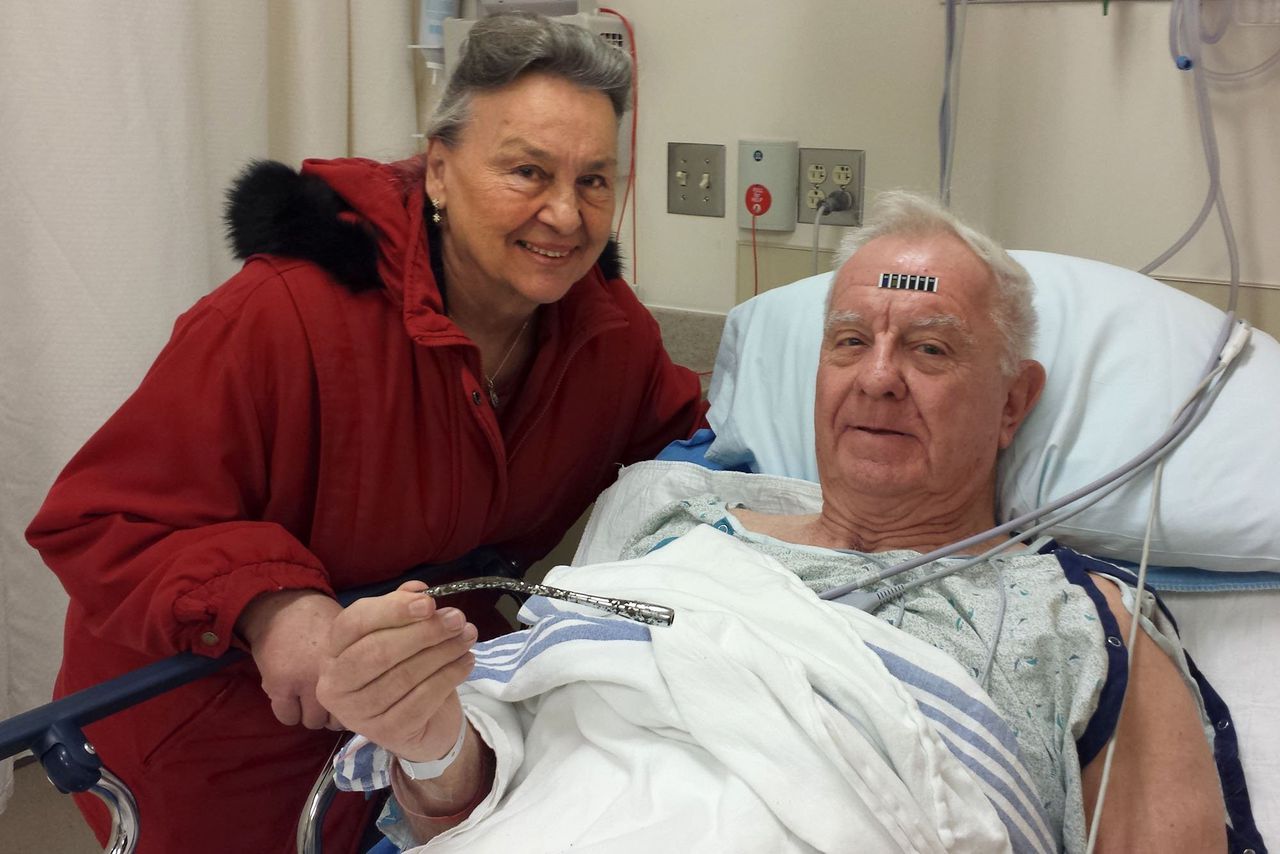 "We see all kinds of foreign objects like nails or pellets, but usually not this large, usually not a turn signal from a 1963 T-Bird," Lang said. "Something this large often gets infected."

When I bought my first Riviera, both the turn signal and tilt wheel levers were broken off. I went to order new ones at the dealer and the guy mused, how did that happen. I said danged if I know but they’re both broken off. Maybe in someones arm somewhere.

On our 1976 Granada the turn signal stalk was so flimsy I broke it off by dragging my arm across it when exiting the car. It cost $98 to replace in 1979.

Back in the '60s, at the annual NY Auto Show, I sat in a Skoda sedan.
I found out that the turn signal lever was so flimsy that I could easily bend it with my 13 year old fingers.

I don’t know how the guy lived from day to day. If I get a splinter…the world stops for me until I remove it from whatever body part that it’s in.

In 2003 our rental in Spain was a brand new Opel Vectra sedan. 2.2L turbo diesel, 5sp M/T. I really enjoyed it with the exception of the turn signal lever. It was electrical (digital) as opposed to mechanical. At least that is the only way I can describe it. There was no mechanical detent to center it in the off position. It operated normally when making turns and self cancelled by kind of eerily moving back to center rather than just “clicking” off. Using it on the AutoVia which is much like our Interstates (to avoid confusion I will just call it the Interstate) was not very successful. When passing on the Interstate I would signal, pass and return to my lane. without turning the Opel’s signal would not self cancel. When I tried to manually cancel it would signal right-left over and over but not off. I became so frustrated I felt like tearing the turn lever off and throwing it out the window! On the Interstate with no close traffic I found if I slightly jerked the wheel one way or another then released it would self cancel. Car and Driver stated you could spot a Vectra far ahead of you on the highway by the left right turn signals. I appreciate technology that advances us. I hate technology that fixes things that ain’t broke!

It baffles me how that guy could walk around for so many decades without some type of symptom.

No one ever questioned an entrance wound or exactly why a metal detector was going off?

True, missileman, but if your splinter was the result of hitting an IED I doubt if you’d notice the splinter. The turn signal lever was introduced to this guy’s arm as a result of a major crash.

Still, it is really amazing. Last year there was an article about a guy in England who was suffering from headaches and when they did Xrays they discovered a large nail in his head that he didn’t realize was there.

It’s tough to understand how this was not a problem for the man…to go all those years without a problem.

Years back I had noticed a spot on my knee…looked like a blackhead. It never bothered me so I
just ignored it.
Probably a year went by and while shoeing a horse, I had his foot on that knee and he had put a lot of weight on it…lifting his other foot to get more comfortable. When he put that weight down and slid his foot back a bit, I thought that it felt a little odd.
I put his foot down and grasped that spot with my fingers. I went into a stall and dropped my pants enough to reach inside and found a chunk of brass. Not a sliver…more like a remnant from chiseling. It was a moon shaped piece about 1/2 inch long and the center had to be 1/8 inch thick.
Go figure!!!

The smaller they are the more they seem to be such a bother. I found that these work real well for slivers. Any place that carries fly tying gear will sell them.

I’m like @missileman, put everything on hold with the smallest of slivers, and I could never figure out how this piece of brass wasn’t even noticeable to me.

VDCdriver Wow! Someone who has sat in a Skoda. I actually rode a short distance in a 1972 Skoda. When I visited the Czech Republic in 2000 I was very pleased to find a former “iron curtain” people still reveling in their long overdue freedom. Both Czechoslovakia and Hungary rebelled against the USSR in 1968 and 1956.
They were of course crushed by the Soviets. I frequently visited Hungary and spent 3 days in the Czech republic in 2000. I think their people were probably similar to ours circa early 1780s when they were freed from oppression. When I became lost trying to find a certain address in Brno Czech Republic I stopped at an auto parts store for directions. An employee spoke some English which was rare. I pointed out where I was trying to go in the phone book. A customer purchasing tune up parts for his 1972 Skoda asked (in Czech) what the problem was. He knew exactly where I wanted to go and offered me a ride. His vintage 1972 Skoda was like new! I imagine the Czechs like the Cubans had to take very good care of their vehicles lest they end up with Ladas or Yugos! I tried to give him a couple of bucks for his fuel and trouble. He flat refused and seemed a bit insulted. It could be a cultural thing, like if you help someone your reward is the satisfaction of helping someone? I was raised like that.

I was always impressed with the people in the Czech Republic but didn’t care for the food at all. The guides we had on two different trips talked about how happy they were to be done with communist rule and how hard they were working to put things back together again.

As far as slivers go, I’ll have to try some of those tweezers. I bought the best I could find for pulling slivers but still a problem digging them out. I really need one of those lighted magnifying glasses too.

When I was in The Czech Republic, in the early '90s, I was also relatively unimpressed with the food. Actually, the food was…okay…but their insistence on placing “dumplings” (in reality, just large, totally tasteless slabs of soggy, white bread-like carbs) on each dinner plate made for a less-than-satisfying culinary experience.

The Czech beer, however? Absolutely incredible!
Pilsner Urquell has always been one of my favorites, but there were some local brews–whose names I can’t recall–that were just as good.

Now, to return to an automotive theme, every time that I emerged from The Hotel Diplomat, there were one or two Tatra T603 taxis parked there, awaiting passengers. These large Tatra sedans were undoubtedly the only truly high-quality cars manufactured anywhere in The Communist Bloc. I never actually rode in one of those taxis–mostly because of all the stories about Prague taxi drivers ripping people off–but it was at least fascinating to finally see Tatra sedans in person.

In case anyone is not familiar with these…unusual…large sedans, they had the distinction of being powered by an air-cooled V-8, mounted in the rear! How’s that for unique?

Those Tatras still reflected the innovative spirit of their original designer, the genius Hans Ledwinka. In case you never heard of Ledwinka, he is the one from whom Ferdinand Porsche copied his designs!

Yes, Ledwinka was held in such reverence in Central Europe in the early years of the 20th Century, that he was the chief innovator whom others copied. In a slightly indirect way, you could say that he was the real father of the original VW, simply because virtually all of Porsche’s designs from the 1930s were simply copies of what Ledwinka had already done!