How to "beat the clamp" 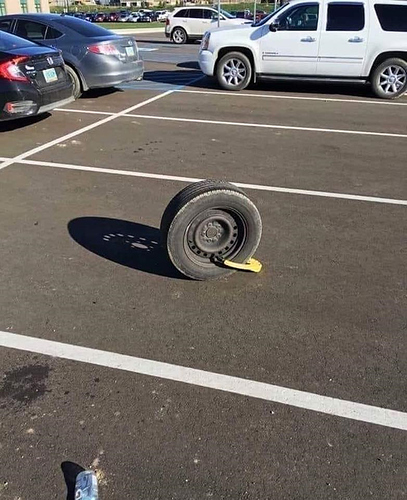 More and more it seems that law enforcement is becoming a ‘taunt and flaunt’ authority game that results in a game of ‘one-upsmanship’ with a growing segment of the population. When law enforcement deteriorates into an ‘us against them’ game by excessively enforcing the letter of the law unnecessarily while ignoring the intent of the law the largely law abiding public suffers while the scofflaws grow in numbers and methods to defy and avoid law enforcement’s efforts.

The real motto of many police forces is GOTCHA NOW SUCKER!!! And that boot/wheel likely had many police livid for days.

And that boot/wheel likely had many police livid for days.

Maybe not. The driver got away, but not for long. I’m sure the license plate was logged into the violation database along with other pertinent details. The owner’s address is known. All they have to do is take a leisurely drive to the owner’s home and have a very interesting conversation.

This assumes that the picture is not staged.

I’m not so sure that many officers take a stoic view of situations like that @jtsanders. I would imagine that for the most part law enforcement sees every effort to avoid their spiteful tactics as a personal insult. But the scene could be staged. Everyone likes a good laugh.

The real motto of many police forces is GOTCHA NOW SUCKER!!!

I would imagine that for the most part law enforcement sees every effort to avoid their spiteful tactics as a personal insult.

I think the real crime cops are punishing when they beat people up, etc., is Lèse majesté. Many cities now fund themselves with fines instead of taxes.

I’m sure the license plate was logged into the violation database along with other pertinent details. The owner’s address is known. All they have to do is take a leisurely drive to the owner’s home and have a very interesting conversation.

The car has a plate. Its registration has to be renewed. Government can keep these charges on file, demand their resolution before allowing renewal. Unfortunately some people shoot cops that come to their door. It’s safer to deal with them when they come to the DMV.

If the car owner has property like a house the county can add the ticket cost to the tax statement. You WILL pay for it. Now, if you are a renter then it’s harder to get payment. The govt has ways to track you but you need to be in the system to be found.
Sell a cheap car and don’t transfer title at DMV? Learning experience.

I’ve heard the expression “living off the grid” more and more often lately. I can’t understand how the cost/benefit situation can possibly be positive but there’s a lot these days that flies right over my head. 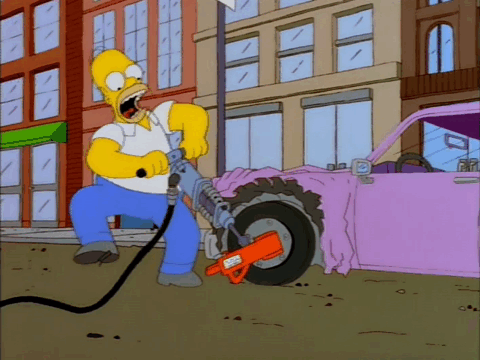 I sure do. I’m sure even then, a new fender cost less than a NYC parking violation, so as always, The Simpsons gives excellent advise on what you should do.

I’ve seen a few episodes of Parking Wars and I’ve also retrieved stolen cars from impound and must agree it is a costly and highly annoying task to get a car out of the impound lot gate. It’s unbelievable just how unconcerned the staff at the lot is. Where would they think that the insurance and registration would be and if it was where it belonged how would I get it if they prevent my getting to the vehicle? And imagine my surprise when the week+ charge for storage added hundreds to the total buyout despite their not notifying me for 8 days. And BTW, a technical education in Memphis has several expenses not mentioned in the brochures.

Rather than leave a wheel, I was tempted to remove the wheels and the license plate and leave the rest of the car for the university when I retired. I thought this might be a way to get back at parking services. I had driven the same car to work for 33 years, so I thought of leaving it as a monument.
Actually, when I was a graduate student living in married student housing, there were residents that would graduate at the end of a semester and just abandon their cars in the parking lot. The cars were junkers to get them around town. I suppose these graduates got jobs in far away locations. A few weeks into the next semester, a wrecker would come and tow the cars away.

I’m sure even then, a new fender cost less than a NYC parking violation

I believe I drove in NYC once . . . but I wasn’t there long enough to get a parking violation

I’ve known a few people who’ve abandoned their cars at the impound . . . because they determined it was easier and cheaper to just give up on it and buy another car. At least that’s what they said

When the price of the ticket far exceeds the value of a wheel and tire. I support the police but some of these crazy laws and fines can be excessive, so gotta be careful that the punishment fits the crime.

I still remember our law professor 50 years ago talking about a law is only effective when the majority of the people support it.

The owner may be able to drive he car but tickets or whatever will not go away. Delaying the inevitable, my thought.

The owner may be able to drive he car but tickets or whatever will not go away.

OK, I’ll tell the story. Years ago, early 70’s, my BIL lived in DesMoines for a little while. He had gotten a parking ticket and not unusual forgot to mail it. One morning the police showed up at his apartment and hauled him off to court just before he left for work. The only thing that saved him was he still had the unmailed envelope in his suit coat to show the judge who let him off.

I guess back when DesMoines was a low crime area or broken windows policy or something.

He had gotten a parking ticket and not unusual forgot to mail it. One morning the police showed up at his apartment and hauled him off to court

That is literally a waste of public resources

Sworn officers should be doing more important things, versus going after guys who didn’t pay their parking ticket . . .

Sworn officers should be doing more important things, versus going after guys who didn’t pay their parking ticket

Maybe they had few enough problems at the time that going after scofflaws was a good use of their time. I do think that @bing’s ditzy BIL should have paid court costs, including paying the cops.

If someone ignores their income tax until it exceeds $10k there are several companies that specialize in negotiating a significant cancellation of the debt and no one is ever threatened by someone banging on their door at 7:00am demanding payment. But the law seems to have a great deal more patience and forgiveness for big spenders. It’s obviously the small time crooks(?) who are relentlessly tracked down and made criminals. Those who fail to put $1 in a parking meter get drug to court while successful Uber drivers and real estate agents who earn 6 figures and ignore April 15th have a GET OUT OF JAIL FREE card.

Can’t say that it applies to all areas but in my area Clamping a car is rare.
In my area you can’t renew your tags if you have overdue tickets but if it’s something more serious then Traffic Enforcement (not the Cops) brings the tow truck. Blocking traffic during rush hour, huge amounts of parking tickets, unregistered vehicles, etc., they just want to get the car off the road so all get a ride to Impound.

On the other hand if you’re stupid enough to break it loose or if you’ve got some serious/missed court date operating offenses then you’d better expect that your next encounter will be with the real Cops to give YOU a ride to the People Impound and a date with the judge.