How soon will it be before they "down-size" a Gallon of Gasoline?

How soon will it be before they “down-size” a Gallon of Gasoline?

When I asked about the downsizing, the sales folks said it was so they could add tint to make it a full gallon. I told them they did not tint my paint and I wanted that extra ounce of paint or a discount for the shortfall… I was joking but they were taken back and went to get the manager.

The manager thought I was serious and went on an extended explanation that it was an industrial standard and he was sorry but there would be no allowance made for the “Short Gallon.”

Finally, one of the staff noticed that the Paint Can said the color was Extra White… By now, I think the manager was getting the hint…

He asked what he could do to make this right and I told him I would take two paint brushes, He said “Done!” I got some satisfaction at their expense, I got two free paint brushes, and I told them I had better get two more stirring sticks since I was going to have to “paddle these bad boys…” and the look in his eye told me he as about ready to paddle me…

I got while the getting was good… While a Gallon of Gas was still 4-quarts, 128-ounces, and still less that $5.00 US in Virginia… 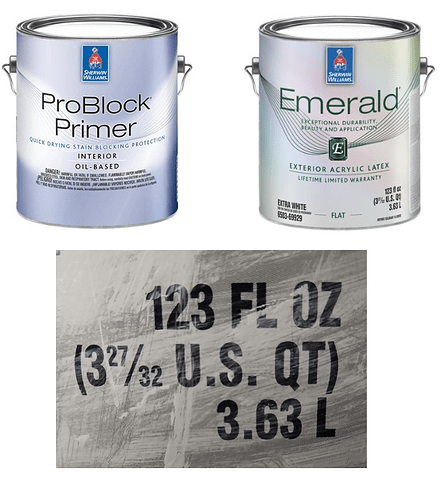 I got while the getting was good

That is what I did as as a kid when granny had a hickory switch in her hand.

is there some reason you have to be a jerk ? I really feel sorry for retail people that have to deal with stuff like this if it is even true.

really feel sorry for retail people that have to deal with stuff like this if it is even true.

Wait until he measures a 2X4.

is there some reason you have to be a jerk ?

We’re supposed to worry about other people being jerks?

Gasoline is already only .90 or .85 gasoline content due to ethanol. It is already downsized.

Wait until he measures a 2X4.

But what about 1/2 ton trucks? They compensate for the gallon and the 2X4’s!

So you didn’t buy 2 gallons. You bought 2 cans clearly labeled at 123 ounces. Where have you been the last 20years, this can is from 2004 124 oz. (Green arrow) 2004 (red arrow) Not the dealers fault, you assumed they were gallon cans. So where is your complaint and where should it really be directed? 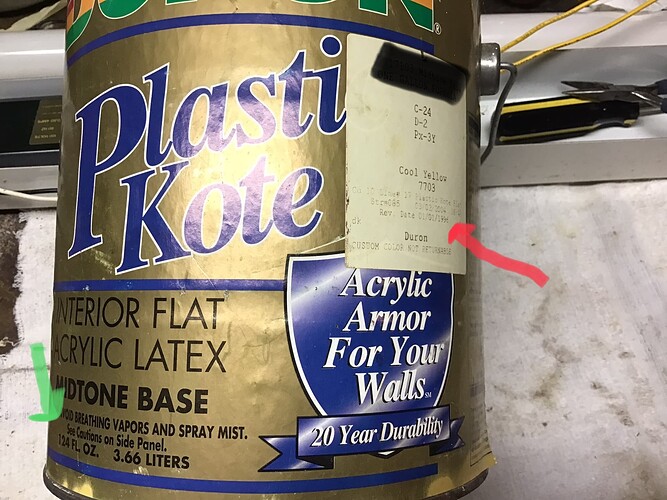 Gasoline retailers won’t downsize a gallon of gas, they will switch to liters. Then you will have to do the math to see if the price has changed until liters are in use for a while. I bet some people will feel a little better when they see the price. $5/gallon is $1.32/liter. That looks good until you look at the receipt.

Shorting the amount of product has become an art form. Toilet tissue became narrower followed by a larger diameter tube in the middle. Paper towels became “twice as many sheets” only due to the standard sheet being perforated in the middle. Half gallon ice cream containers became 3 pints.

My memory is fuzzy on this but I seem to remember that back in the 70s (?) some burger chain offered a 1/3 pound hamburger to compete with McDonalds 1/4 pounder and many thought the former was actually smaller.

My kids hear me complain about smaller packaging sizes all the time now. Guess that makes me “old”…

I’m convinced the “sharing size” M&Ms sold today were the “regular size” M&Ms from 25-30 years ago. Don’t get me started on potato chips, especially Fritos. The “regular” Fritos bag in the store today was a “snack size” bag in the 90s.

How soon will it be before they “down-size” a Gallon of Gasoline?

As far as I know, there are departments of weights and measures

Other than the United States, petrol is sold by the US gallon in Belize, Colombia, Dominican Republic, Ecuador, Guatemala, Haiti, Honduras, Nicaragua, and Peru, as well as in the Marshall Islands, Federated States of Micronesia, and Palau, which are associated with the United States. Liberia, a former protectorate of the United States, uses US gallon when selling petrol.[38]

I blame it on those “crazy revolutionaries” like Washington, Adams and Jefferson!

BTW So why isn’t “Dry Gas” sold by the Dry Gallon?

BTW So why isn’t “Dry Gas” sold by the Dry Gallon?

Good question now all we need is a good answer.

Shorting the amount of product has become an art form.

I know it. I like roasted red pepper hummus on my morning toast. The dollop of red peppers in the center of the hummus is definitely smaller than it was 6 months ago, and it seems to me it shrank twice in the last couple of years.

Oh boy. The can said 123 ounces, not one gallon. Just because it is in a gallon can doesn’t mean it is a gallon. Gas pumps clearly dispense by the us gallon which is regulated by weights and measures. If you put one gallon in a 2 gallon can, did you get cheated? Why do I bother?

Many people and organizations make up the “they” you refer to. Unlikely “they” would agree to change the definition of a gallon or any other measurement that has been used internationally for centuries.

In the 1970s most gasoline stations’ pumps limited the sale price to .999/gallon and in order to dispense fuel and display the price the pumps were re-calibrated to .5 gallon increments. I guess that was “down-sized.”

Dollar store does that. Adjust container to price range. Pint of oil? Antifreeze too.