How much would it cost to drain fuel tank (old gas)?

2009 Toyota Camry, parked in garage for over a year. Gas is 1-2 yrs old. How much would it would cost to drain full tank (18 gal) of old gas and also to ck fuel lines? Thanks so much for reply!

How does the gas smell? Was it treated with Stabil when it was parked? How much ethanol was in the gas?

I doubt you need to completely drain the gas. I’d hand-pump some of it out, add some fresh non-ethanol gas and drive it.

A year is not a very long time; I would syphon out as much as possible and then fill the tank with fresh premium gas and then try to start it.

If it was stored in a reasonably cool place, you can probably just start it and go…

If you can siphon out a small sample, you can examine it for serviceability… Should smell like gasoline, not old paint. Color should be light green/blue. If it has turned orange and smells bad, THEN have it towed to a shop that’s willing to perform this service. Many will not, as they have no way to store or dispose of the old gasoline…

If you are able to siphon it out of the tank, remove about half of it, replace with fresh fuel. Then burn the removed fuel in small doses…

You can use the old gas in lawn mowers etc, but most likely you can just fire up the engine and go with it. Fuel tanks are pretty well sealed these days.

Yoy might try this PRI-G additive, which the manufacturer claims has the ability to re-conditon old stale gas, and which seems to have many satisfied customers: 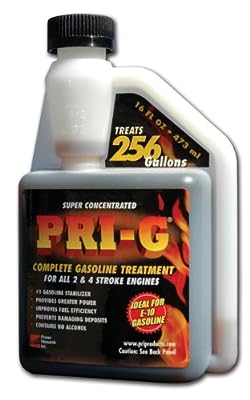 Thanks to everyone who replied. The car was dead so towed and drained. I was trying to gauge the avg price of the cost charged for draining. No idea if gas turned bad. They charged about $380 for new battery($111), oil & filter change, draining gas and refueling $25 worth of new gas, fluid top up and general check of car. Feels like ripped off but I know nothing about cars. It was done at the Toyota dealer so I know charges were high.

Typing these into my calculator I’m getting something like $450, so it appears to me the bill is reasonable.

If you wanted to save some money, you could buy the battery from Costco ($70), haul it home, and find a mechanically inclined neighbor to help you install it, have let a place like Jiffy Lube do the oil/filter and fluid top off and general check ($45), and ask an inde shop to drain the gas tank ($100) and refill it yourself at the gas station ($35).

What’s that come to ? $250. You got the problem solved in one trip, everything is AOK, the expert Toyota mechanics at the dealership looked for any remaining problem and give you the thumbs up … for an extra $130 for the convenience, seems like the dealership gave you a good deal to me.

You got a deal on he battery. I just bought one at AutoZone and it was $125.

The total price for all of that is very fair and I agree with keith on the battery price. The price of a battery alone for my Lincoln even at Wal Mart or a parts house is about 110 dollars, not counting core charge, enviro fee, and taxes.

Battery prices have gone way up. Just 3 years ago that 110 dollar battery was 80 and the core charge jumped from 2 to 9 dollars.

Around here at a local independent shop that would be willing to dispose of the gasoline the price would be about the same as you paid at your dealer. I think you did fine price-wise. $300-400 doesn’t get you much these days, it’s about the average price of a visit to the shop.

Toyota batteries are the BEST. They last at least 5 years, unlike the ones at the parts stores. They last 2 to 3 years, if your lucky.

What you got for you $380 was that a professional went over the car for faults and got it running. A battery is almost $100 installed anywhere, an oil and filter can be anywhere from $30 to $50 anywhere, and hour shop rate to drain the fuel is maybe $50, and a tow can be easily $100. And this was done at a dealership, which is usually higher than an independent. But since you said “I know nothing about cars”, you got the car running, looked over by a pro shop, at a decent price. Peace of mind has to be figured in here too. Rocketman

One more thing . . . disposal of the old fuel? Can be a problem in some areas. I think that you paid a decent price. Happy motoring! Rocketman

I vote for Sears Die Hard batteries - although I haven’t bought one in over 10 years, and I think they are different now - but they stand behind their product. example : they charged my ~10-year old battery when it recently became drained after sitting for like half a year. before that always had good experience.

They often leak acid, whereas the factory batteries don’t leak that often

The “over the shelf” AC Delco batteries even look slightly different

These are my observations