How can I get my 16 year old son to drive more slowly?

I am teaching my 16 year old son to drive. I am nearly constantly telling him to slow down. I am frightened when he drives alone he will drive way too fast. How can I get him to slow down, especially when I am not in the car?

There are electronic devices that you can buy that will essentially monitor the car’s speed and the force of braking. These devices keep a record of driving behavior, and can be checked after he drives, in order to find out how he operated the car.

Tell your son that these are the terms, without compromise:

As a retired school counselor, I can tell you that getting the desired behavior from an adolescent involves finding the correct leverage point. With a 16 year old, one of the two strongest leverage points is loss of driving privileges.

Just curious, what kind of vehicle is he driving right now?

You need to tell him to scan the gauges every 10 seconds, monitor speed and whatnot. How fast is he going over the limit?

Around here if you are not doing at LEAST 5mph over the limit people are on your rear. It gets old, The speed limit is there for a reason.

If he has to work to pay for the full price of the car, the gas, insurance, and repairs, you can be certain he’ll drive much more carefully than he is now.

I’m not a believer in any vehicle devices that try to control behavior. You may win the battle in the short term, but will lose in the long run. Is that the trust approach you want to be developing?

How fast is he driving compared to the prevailing speed of traffic? If the speed limit is say 55 MPH but 90% of the traffic is going 75, then he’s actually much safer keeping up with traffic than he would be driving at 55.

If this is a matter of speed being a real issue (say 50 in a 30 in town, etc) then my vote is with VDCdriver; restrict the driving.
There’s not only the safety issue but the potential for lawsuits, liens, bankruptcy, or even criminal charges if someone is injured or dies because of the son’s driving habits.

I went through this same wrestling match with my daughter when she first learned to drive and it was doubly tough because I knew she was speeding and my wife kept insisting she was not and that if she was speeding “it’s because the speedometer is off”. Defending the indefensible…

Replace his car with a bicycle.

I don’t want to make the OP any more neurotic regarding his son’s driving than he already is, but I feel that I have to point out that there is actually something that is statistically far more dangerous than speeding, and that is texting while driving.

While all adolescents believe that they are indestructible and that no bad consequences will ever befall them, perhaps the image of this young man from my county–dressed in a prison jump suit during his sentencing to 5 years in the NJ State Penitentiary for vehicular homicide–might have a deterrent effect on your son: 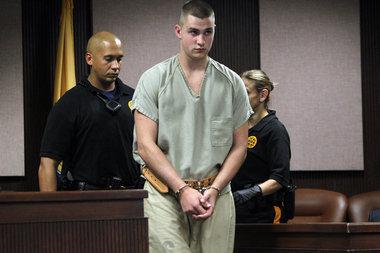 Son of woman killed in collision faces teen driver who was texting behind the...

Samuel Oltmans, 18, said he’ll carry “the guilt and sorrow with me every second of every day for the rest of my life, and I’m truly sorry"

Tell your son that you will be checking his cell phone when he comes back from driving, in order to determine if there were any texts or phone conversations that took place while he was driving. If you find that he was–as my friend, Judge Reed says–“driving blind”, then you have to protect him (and other people on the road) from injury, and protect your assets by taking strong disciplinary action in order to make him change his ways. And, with someone of this age, the only strong disciplinary action that is likely to work is to restrict his driving privileges in the event of violating your rules.

George, ‘‘more input’’ please.
You want him to drive more slowly…in relation to what ?
The posted limit ?
The other traffic ?
Your opinion ?
Let’s put it in perspective. Just how slow is he NOT driving ?
Do you want him to be the slowest vehicle in the line, sandbagging the flow ?
Do you want him to co-ordinate and flow smoothly with the others ?
Is he now passing eveyone else and changing lanes back and forth ?
Is he racing toward a red light only to brake at the last hundred feet ?

Make it a vehicle use ultimatum.
Operating the machine is one thing.
DRIVING is another can of beans.

VDC has given you excellent suggestions. The only thing I’d add is to put the “contract” inwriting and have him sign it. That should impress upon him that you’re serious. And be sure you let him know that you love him, but you WILL enforce the terms of the contract.

OP–Putting your expectations in writing, and stating exactly which privileges your son has–as well what will result from violating your rules–will make for much more permanence than any mere chat with him.

And, as I always recommended to parents, after you both sign it, make sure that it is posted on the door of the refrigerator. That will be a reminder every time that he opens the door in order to get a snack or a drink. This will make your behavioral contract something that is more tangible than a piece of paper that is not visible. You know…out of sight, out of mind.

And, as mountainbike, stated, if you threaten a certain penalty, you have to follow through with it in the event of a problem with your son’s compliance with that contract. One failure to follow through means…game over…in terms of his respecting the limits that you are placing on him.

Might I recommend instead of you teaching your son to drive, that he take a drivers ed course from school. These guys are professional teachers and trainers and know how to deal with teens. I remember my Dad trying to teach my sister and dang near got us all killed. All I did was teach my son the basics on a farm and then turned it over to drivers training. Yesterday I was waiting at a stop sign for a van to make it turn-Sloooowwwly and hesitantly making the turn and stopping several times. I thought it was a 95 year old but instead it was a kid with his Dad patiently sitting in the passenger seat. Besides, drivers training cars have second brake pedals on the passenger side. Much safer.

My dad taught my brother and I to drive

I was a pretty decent driver, but my brother was a speed demon

My dad initially paid for the repairs, but he made my brother repay every single red cent.

I agree with all of @VDC’s and others excellent advice. From a technical point of view, kids have highly developed reflexes and often their sense of speed is distorted compared to we older folk with their different perception and lack of respect for others who travel the same roads. They often lack patience in traveling at slower speeds. That does not make them safer as they still can’t compensate for the other guy during emergency situations. I have always used cruise control when ever possible and encouraged ( made while teaching them ) my kids to do so as well to both moderate their speed and give them a sense of what proper speed feels like.

I highly suggest you do the same with him in addition to all the other excellent advice. I credit this for all drivers in families like ours to having never had a speeding ticket and having never been pulled over. Respecting others on the road and forcibly using aids like speed control to develope patience and respect in traveling at slower speeds…along with the appropriate deprivation of driving rights should they ever be pulled over for driving too fast are important. There are somethings we as parents should just not put up with…this is one of them. Most importantly, continue to set that example WITH YOUR OWN DRIVING.

More often then not, new drivers are emulating what they see from you or someone else. Make sure he only sees the right things being done behind the wheel.

" I recommend instead of you teaching your son to drive, that he take a drivers ed course from school. "

It may be different in your neck of the woods, Bing, but in my state, only a few public schools still provide Behind-the-Wheel Driver Ed. Budget cuts have forced the elimination of several programs over the years, and these classes went to the chopping block in most NJ schools over a decade ago. As a result, private driver training schools are flourishing, so the OP should consider this route if his local schools have also opted out of driver ed.

“my dad simply made him pay for the repairs”

+1!
My Dad made me pay for a new hood, fenders, & grill on his '63 Plymouth, and it did indeed make me a much more careful driver.

“More often then not, new drivers are emulating what they see from you or someone else. Make sure he only sees the right things being done behind the wheel.”

If all else fails, eventually there will be some trouble, hopefully minor. At that point it is important to remind him of your warning, and to strictly enforce the consequences. Sometimes a teenager, before they can improve, just needs a refresher course in Life 101.

In addition to the good ideas already given, you can insist that he slow down, and not make you remind him to, before he will be allowed to drive on his own. If he can’t even regulate himself well enough to drive slow with you in the car, he isn’t ready to get a license.

To me, the idea of ruling your son with ultimatums and telling him you’ll be using technology to verify he’s obeying the rules only reinforces to him that you do not believe or trust him.

“More often then not, new drivers are emulating what they see from you or someone else. Make sure he only sees the right things being done behind the wheel.”