This only started three days ago and has happened everyday since. Works fine in the back but up front, even after you remote start 10 minutes prior, it will blow cold air. Sometimes the right centre blows harder than the left centre. However, after about 10 minutes of actual driving, then it starts to blow hot air. That’s happened all three days now.

Any idea why that would happen? So odd that it works after 10 minutes of driving despite the car already being warmed up.

Trying to avoid having to go to dealer to diagnose for lord knows how much. Just wondering if someone knows of that exact situation before I do more research this weekend.

Thanks for the reply. I’ll look into that online when I have time this weekend. I should have mentioned though that it blows cold air in all the settings up front, if that means anything. So for defrost it was only about 2/3 effective on the windshield. Not a perfectly clear windshield but good enough until the actual heat kicked in after 10 minutes of driving.

If you have automatic climate control click the ‘Auto’ button and make sure all temperatures are set to the same value. Sometimes settings get crossed up resulting in unusual behavior. My MKX did that, the two sides were set to very different temperatures resulting in uneven heat, even on ‘auto’ and ‘single control’.

But it could be as described above, a blend door problem…

I doubt this is the issue, but you did check that your coolant level is correct just to be safe, right?

Are both sides up front blowing cold when you select the dash vents and not defrost? It seems unlikely that both the left and right temp actuators have failed.

How long does it take to get rear heat? How are you checking it? Motor is hot. Heater core is hot. Air to rear duct is hot?
You say it gets hot after awhile, which sounds like a thermostat issue.

All four dash vents blow cold. Actually, yesterday, for the first 5 minutes both centre vents were blowing the same temp cold air. But then for the next 5 minutes right centre was blowing less cold than left centre. Not warm, just not as cold as the left. Still though, took 10 minutes of driving before heat kicked, as has happened all three days prior. And heat was even.

Now that I understand what the blend door actuator does, and that there’s one for each side, that does seem odd that both sides are blowing cold up front while rear is fine. Either both front ones failed same time or something else is going on.

Rear heats up normally. Only a few minutes after remote starting the car. I just check with my hand to feel the hot air blowing out. But still cold air up front.

Yeah, it’s usually on Auto. I’ve played around with it so it’s auto for left and right and then set each side to different temps but still have the problem of cold air for the first 10 minutes of driving.

There may be a restriction in the heater core, there was a problem with the coolant quality in Mazda vehicles 2016-2019.

"Some customers may complain about poor heater performance even after the engine reaches normal operating temperature. This may be caused by a plugged heater core.
For 2014-2016 Mazda6 and 2013-2016 (US spec) / 2017 (Mexico spec) CX-5, the CHECK ENGINE light may turn on with DTC P011A:00 (ECT sensor No.1/No.2 performance problem) stored at the same time.
NOTE: Refer to TSB 01-015/15 if the customer is using a block heater at temperatures below freezing.
To solve this concern, two mass production changes have been implemented.
a) The concentration of the coolant has been increased so that the amount of the contained anti-rust additive is higher.
b) The composition of the coolant has been changed (the ratio of the anti-rust additive has increased)."

Thanks for bringing this up. Just watched a video on flushing a heater core. Not sure if this is the problem but now I have a better understanding of what may be the problem and how to fix it. But no videos specific to my vehicle. Will have to take a look when the wife brings the car home. That but first open up the panel below the steering wheel to see if I can tell if the blend door is functioning properly when switching temps.

Will also check the coolant level like lion9car suggested.

It turns out my wife isn’t coming back with the car until tomorrow. But I did ask her to check the coolant level. It’s one inch above Low. Should top it off now, no? If so, is it fine to get it from the local big box store and not from the Mazda dealer? This model takes a 50/50 mix.

Like this one from Canadian Tire. The store is right up the street from where she is at her parents right now. It says for Mazda among others on the bottle:
https://www.canadiantire.ca/en/pdp/oem-50-50-premixed-concentrated-anti-freeze-coolant-mazda-infiniti-nissan-blue-3-78-l-0293084p.html

Edit: Never mind. I was just doing some reading and I’m seeing that people say to get the OEM Mazda FL22.

There is no point in adding coolant if the heater needs to be repaired. After the repair you should replace all of the coolant in the cooling system.

Topped up the coolant since it was so low. I wanted to have some in my shed anyway. However, my wife is the one that did it as she’s away right now. But she said she went about four inches over the top line. It’s not like she hasn’t poured fluids before. She’s done it several times over the years on a crappy Jetta and Pathfinder back in the day. I guess I should have explicitly told her to pour just a little bit at a time.

She says due to the design of it she can’t tell how much space is between the fluid and the cap. She did say none leaked out so nothing is on the ground.

Wondering how bad it is for it to be overfilled. She said she can’t take a pic right now as it won’t show up on two phones she’s tried with phone flashlight or regular flashlight. But here are pics of what it looks like from a DIY video, manual and replacement part.

I read when the car heats up the coolant will expand, but it’s a question of how much I guess.

Actually, I’m looking up siphon tubes now at the local big box store that is up the street from her. Her brother is there now so hope they can suck it out and put into a bucket and get rid of it properly.

Update: Her brother got it siphoned out. Have to dispose of it at a service station tomorrow. 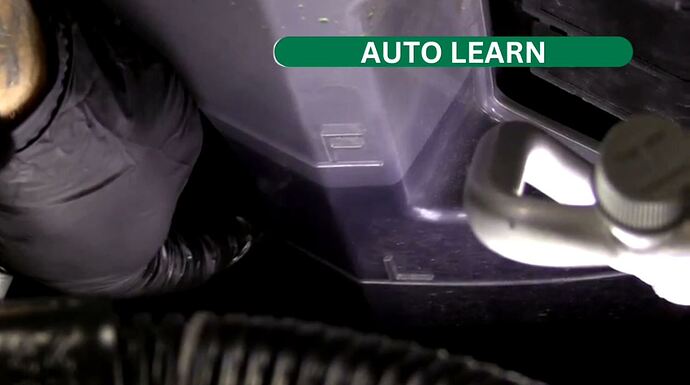 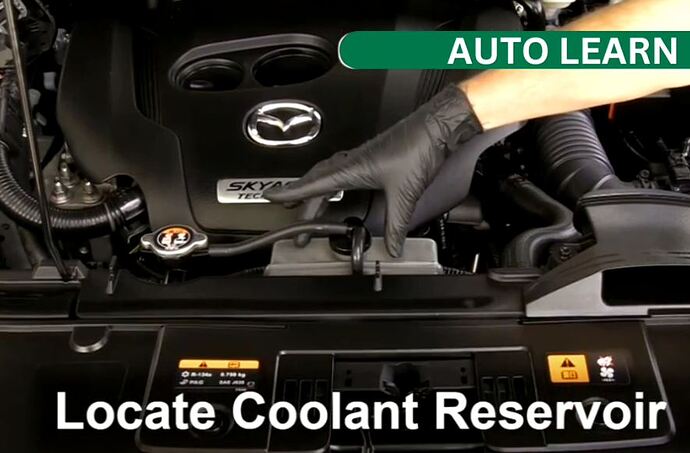 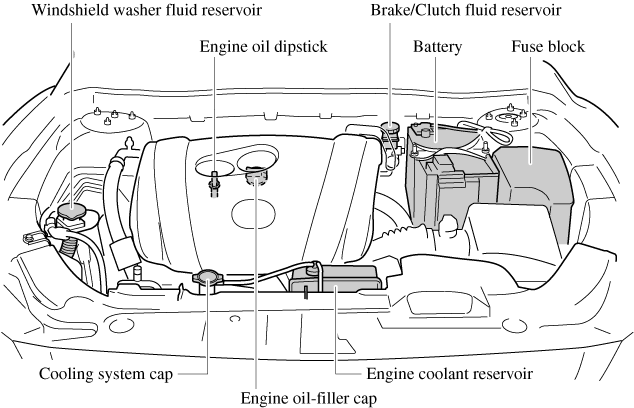 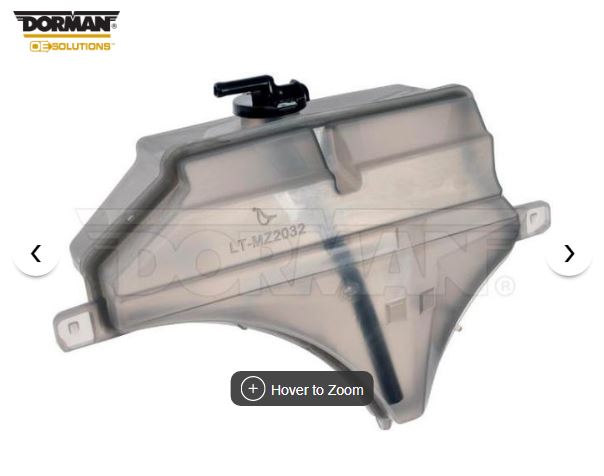 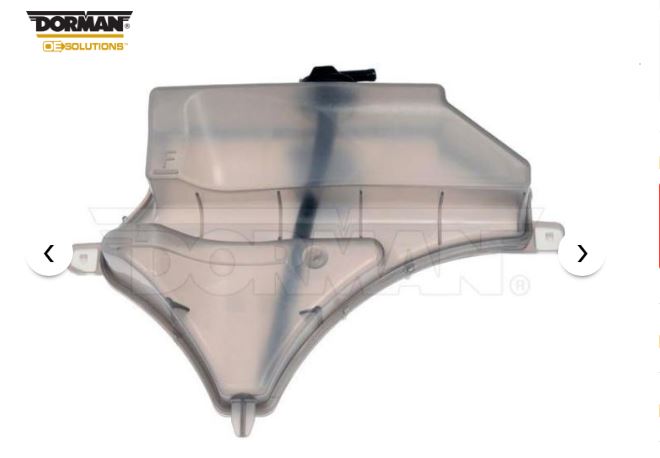 Can’t speak to your CX-9, but my corolla’s coolant overflow tank looks pretty similar to Dorman photo above. The way I do it, w/ engine cold I remove radiator cap & top off radiator to nearly full, then put radiator cap on and idle engine in driveway until engine warms to normal operating temp & engine fans turn on. Then I add enough coolant to overlflow tank to reach the “full” mark. If tank has no “full” mark, add enough coolant so tank is about 3/4 full, then make a “full” mark at that level with a felt tip pen. Next AM make a mark on the overflow showng the cold-full level.

I’ve never put in too much, but if I did I expect the only problem would be the overflow tank would overflow and coolant would spill out and onto the ground and make a mess when engine was fully warmed up…

I expect you already know that your car’s owners manual is what to rely on for this sort of info.

I would not worry too much about it, as long as there is an air gap in the expansion tank.
Just a thought, I do not know, but your vehicle may have two heater cores, one for the front and one for the rear, front core might be restricted.
Anyway, if the coolant has never been changed, it is time for that along with a diagnosis of the problem. Still could be a sluggish blend door or restricted flow to the heater core. If automatic climate control, that could be at fault.