Having some good success running my tires @ 45 PSI

I believe that 45 psi tended to wear the tires on the center line, and this tended to mask the tire defect…

SO far, so good—not a permanent solution but… I’m liking it!

Wouldn’t it make much more sense to mitigate your car’s alignment problem by getting it aligned?
Besides, it’ll be a lot cheaper than repeatedly replacing tires worn out prematurely due to bad alignment and overpressure.
And with a good alignment and the proper tire pressure, your car will ride and handle better too.
I’ll let others flog you on the safety issue. But what they say will be 100% true.

I almost suspect a Troll thread. At least I hope so.

The proper pressure is on the Door Post and also in the glove box, I believe. Get a proper alignment and live happier ever after!

Mareakin, please post back. We really need to discuss this. Your life may depend on it.

“Your life may depend on it.”

Along with the lives of the folks who have to share the road with the OP.

A drastic increase in tire pressure suddenly makes tires that are in poor condition (the OP’s own words) safe?
Who knew?

I hope mareakin doesn’t live near me, but we all face unsafe conditions like this all the time. How often do you see someone driving at highway speeds with the donut spare on one hub? How often do you think they just put it on a few minutes ago? I n many cases, I suspect the donut has been there for days if not weeks.

Big problem here, you admit you are running on bad tires and you over inflate them to compensate for various problems. Please put a sign on your car to warn others. I own a 09 Corolla, 120,000 miles, had it aligned once. Tires wear even, car runs straight and true.

How often do you see someone driving at highway speeds with the donut spare on one hub? How often do you think they just put it on a few minutes ago? I n many cases, I suspect the donut has been there for days if not weeks.

I know of one lazy guy who didn’t replace his donut spare until he was forced to because he actually wore it out.
Also, many years ago (I would hope it’s not still the case) there were several federal government agencies that filled fleet vehicle tires to 50 PSI for the sake of fuel economy.

In the book,“Fear and Loathing in Las Vegas”, by Hunter Thompson, a journalist and his attorney who are both stoned, rent a Cadillac convertible and inflate the tires to 85 psi. Personally, I wouldn’t follow Hunter Thomson’s tire pressure recommendation.

I guess a high tire pressure could indeed make an alignment problem less noticeable, since the tire contact surface area would be a little less. More forgiving to an alignment error. Just curious why you think you have an alignment error tho. If it is that the car tends to pull to one side, that could be caused by the tires having developed a wear pattern, or just that the tires weren’t installed with the correct orientation. Some tread patterns tend to pull to one side by their nature. This is mitigated by installing the tires on opposing sides configured so this effect cancels out.

Dewey Cheahem and Howe ie the lawyers prescribe only what is stated in the manual. What you do is your business, but asking an opinion on non recommended options is a short plank on a long boat.

Auto-owner, your acquaintance has a lot of company. I’ve seen this too many times.
It has long been my opinion that these doughnut spares are unsafe. Under ideal conditions, on a sunny day on a straight back road, to get you to the nearest garage, okay. But that isn’t real life. Flats happen on dark rainy nights, in blizzards, and 50 highway miles from the nearest shop that stays open until 2:00AM. And yes, people drive on them on the highway. I really got spooked one day while looking at a brand new pickup and saw a compact spare for a spare tire. Imagine if you will having a 1,000 pound load in the bed and putting a compact spare on. If NHTSA were more serious about safety than politics, new cars would be required to either have a full service spare or no spare at all… forcing the driver to call for a tow.

As regards the OP, he/she has left the building. And is driving home on highly overinflated tires mounted on a car with mechanical problems. Hopefully not near other people.

I imagine many of us take stupid chances every now and then. Had a nail in the sidewall, crank mechanism for full size spare failed, strapped the nailed tire on the roof, and drove 535 miles on questionable spare. Now Spare is going to live at the cabins, as new tire installed. 120 for new crank mechanisim, hoping not to need the spare for a bit

I’m in agreement with auto-owner about people driving around forever on donut spares and I’ve had several of them pass me on the Interstate or turnpike at an estimated 80 MPH.
In one case the car had 2 of them on the back, a full load of passengers, and the tail end was almost scraping the pavement.

Locally, there’s some guy running around here (the ricer crowd) in an older Accord who is running 4 of them. Even worse he has them on backwards so they’re reversed way out.

OK has an unsafe vehicle statute but it’s rarely enforced. 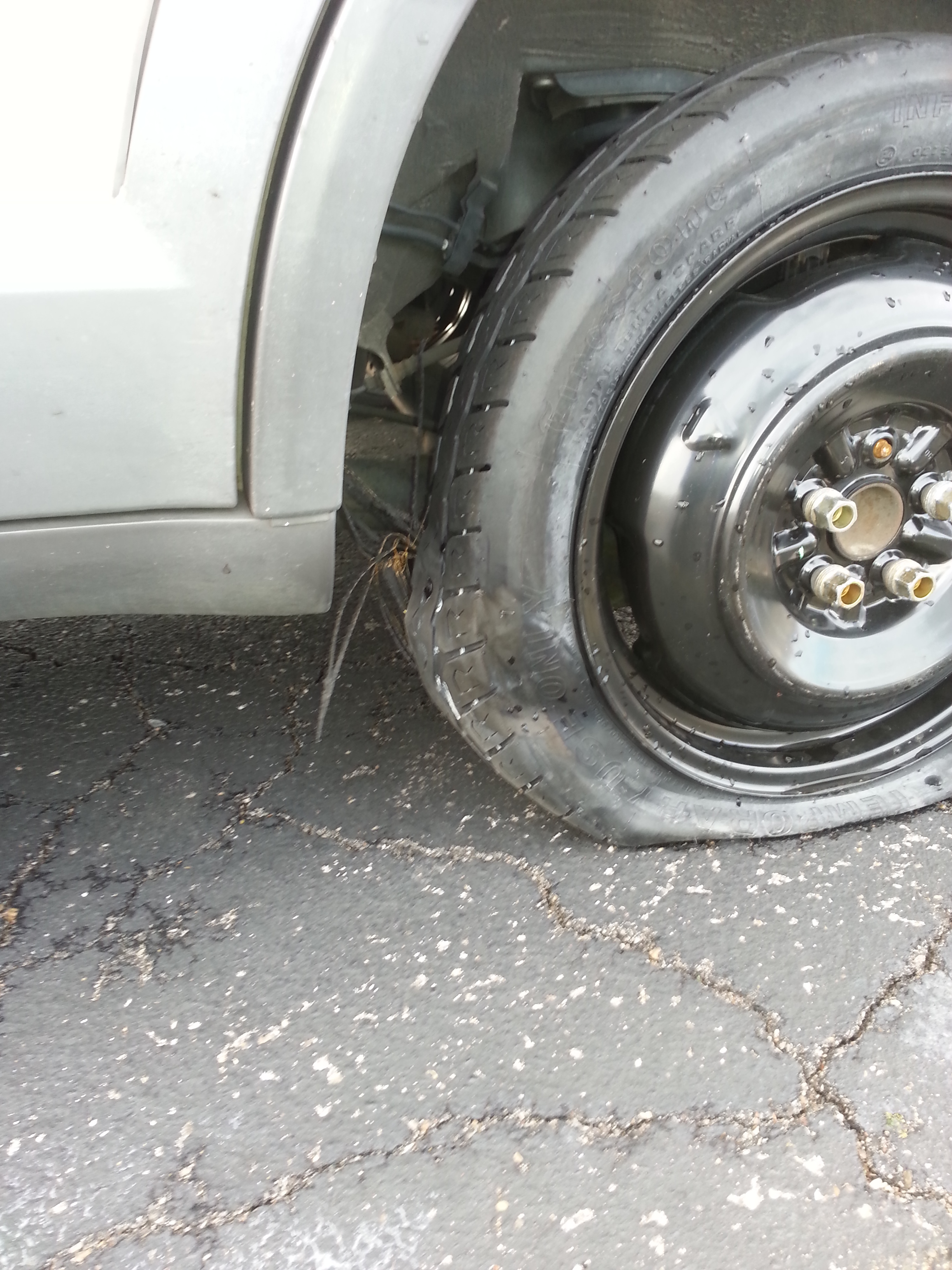 It’s a safe bet to say this guy was in a rather bad situation :naughty:

Those tires are supposed to have high pressure and odds are it was down to 25 pounds. How many people ever check the pressure in a space saver spare…

If that tire let loose at 60 MPH I bet there were some anxious moments.