hey guys. my 1990 jeep, 4.0L str 6 cyl. , has had a problem with slight hard starting for a few months, since I got it really. it seemed to improve slightly after some service, which included plugs, wires, air filter, fixing vacuum leaks and cleaning CCV tube. this service also improved rough idle issues and perhaps MPG. the fuel filter was not changed.

what happens is that it takes a few seconds (4 or 5) to fire up when turning over.

this morning it did not start for my better half, I have not checked it myself yet.

do you have any ideas, other than fuel pump, as to what might cause this or how I can troubleshoot this problem.

as I said, I want to eliminate all possibilities other than the fuel pump to begin with.

well I just went out and checked on jeep. I was able to get it started after 4 or 5 attempts.

the fuel pressure seemed ok at the fuel rail. I did not put a gauge on it but it seemed ok when I depressed the shraeder valve at the port.

as I said , after about 4 or 5 tries I was able to start it. I let it turn over for about 15 seconds and it started.

after starting it would hesitate when I pressed the gas before revving up. it does not usually hesitate at all when accelerating.
this hesitation lasted about 20 seconds as I was giving it gas , then letting it go to idle, then giving it gas etc… after that the hesitation abated.

any thoughts? could it just be a clogged fuel filter?

How does it run at high speed? If no lack of power, then the filter should be fine.

Have you tried cleaning the idle air control valve?

thanks jesmed. my set up is slightly different than the one shown (pcv as opposed to ccv system), but I will clean that valve today and see what happens.

the engine runs fine at speed, and was running a bit rough at idle but that was improved recently with the service I did.

mainly it only has the starting hard problem, which was worse this morning. I have been out driving it about 15 mi just now, with a few stops at stores and had no further problems with hard starting or non starting, but the problem isn t solved I m sure.

I tried starting it in neutral earlier when it was not starting and it did not help, but once I got it started and it ran a bit it was fine.

I m also wondering if my coil may be intermittently faulty, does that happen or do they go all at once? I did not check for spark when it would not start earlier and now it is starting fine so…

I seem to have a different set up @jesmed1, I have multi port injection, not throttle body injection as is common. I have an idle speed stepper motor and a throttle position sensor but no idle air control valve that I can see.

@RodKnox, do you have any thoughts as to my hard start/ no start prob? you seemed to know the set up my jeep has when you have commented previously about the lack of MAF and other things.

my manual says that I need to have dealer set TPS. will it help if I remove and clean the TPS and idle speed stepper motor or should I not remove them?

I wouldn’t mess with the TPS or the IAC. I’d look for a leaky injector.

I don t seem to have an IAC, cleaning that seems simple enough if I did, I have an idle stepper motor, unless that’s the same as IAC. it does not seem to be the same. I think the IAC is on throttle body injection not Multi port injection, but I may be wrong.

I don t see any signs of leaky injector…

aha! the idle speed stepper motor does seem to be the same as IAC and it was loose and filthy! I turned the torx screws by hand

and the o ring is missing!

Yes, the stepper motor is the idle air control…hopefully that does the trick! 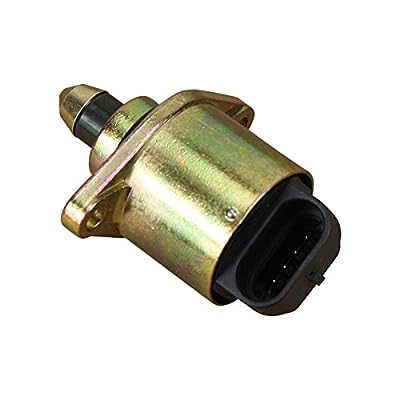 Restore proper idle to your engine with this new direct replacement Idle Air Control Valve/motor the IAC is a key component to your engine's idle speed by allowing for air to bypass the throttle plate ...

yep, I hope so. I cleaned it and am putting it back on to go find an o-ring now. I hope it starts