It’s very true, Joe. I remember when Honda and Toyota were talked about with exactly the same sentiments as I’m seeing here about China. Honda and Toyota eventually became “benchmark” vehicles for domestic brands. Lexus even leap-frogged the finest British luxury cars in quality and precision, and the Acura NSX changed the game for supercars… they’d have to be acceptable quality for the first time.

My first Japanese camera was a Taron sold through Sears, This unit was totally manual and with a wide angle attachment and sold for $58 at the time. A German Baldina was at least twice that much and a RolleiCord/Flex which looked like a Hasselblad was about $300. A real Hasselblad was $750 at the time. Yashikas were just starting to a[pear ion the scene at half the price of a Rollei

The chief photographer for the college newspaper had a Speed Graphic, the standard US news camera at the time with the big viewfinder frame and large film pack. They were very rugged and the joke was that you could club a rioter into submission with it and then take his picture.

I took some prize winning pictures in Ektachrome with my little Taron, and over 1000 slides on a graduation trip through Europe…

Hm, GM would be a wholly owned subsidiary of the Peoples Republic of China today were it not for the government bailout.

Consensus seems to be that the quality could be shoddy at first but quickly improve (like the South Korean and Japanese cars of decades past). So the early adopters will be the guinea pigs they use to work out all the quality problems. If the vehicles have the GM badge, GM will get another big black eye for building crappy shoddy cars in the process. Once the Chinese figure out how to build top quality cars, they’ll start selling them under their own name and possibly try to run GM out of business 10 - 20 years from now.

When all is said and done, there’s really not going to be any manufacturing left in the US at all, is there? How will there be any middle class at all when the only jobs left are baristas and burger flippers and independent contractor delivery and lawn maintenance jobs? And who’s going to have any spare money to drink coffee, order a pizza, or hire someone to cut their lawn anyway?

Judeo-Christian ethics? The only ethics today seems to be “Don’t Get Caught!” Or if you DO get caught, at least make sure you don’t go to prison or have to pay back any of what you stole!

Without reading all the responses first, I have to say that I have ZERO confidence in any Chinese products. They have done it to themselves by supplying junk and it will take years of quality improvement to gain a reputation for reliable products. The problem is the products look the same as quality products but you never know what is actually under the surface. Circuit boards look fine but are they? Is there lead in the paint for kids toys? What’s actually in the dog food? What is the actual metal composition in those parts? Those bolts look good but are they properly hardened to be trusted in a bridge? And on and on and on. There’s a reason why the goods are cheaper and its not just the labor cost. Sorry, just like the girl in high school, once your reputation is lost, it takes years to regain it.

There’s actually a great deal of auto manufacturing being done in the U.S… by Honda, Toyota, Kia, and Hyundai.

When China owns the world, they’ll be building cars in the USA, and selling to us, under their own brand name(s)

@db4690 Chinese cars may end up being built here. I know the textile mills were not a great place to work, but they are overseas now. Japan used to mean cheap stuff, they got better, China will probably get better and another country will replace it for building shoddy stuff.

“China will probably get better and another country will replace it for building shoddy stuff.”

I sure hope that day does NOT come to pass, where US workers are building shoddy products for Chinese owned companies, in factories located in the US. I’m just cringing, thinking how those hypothetical US workers may be treated

“There’s actually a great deal of auto manufacturing being done in the U.S… by Honda, Toyota, Kia, and Hyundai.”

Long before Hyundai and Kia even contemplated production in The US, Subaru began production of its Legacy models in Lafayette, Indiana. That plant is now in its 26th year of operation.

Originally used for the manufacture of both Isuzus and Subarus, it has been solely owned by Subaru for a number of years. In 2007, they began building Camrys there for Toyota (That is correct, a goodly percentage of the Camrys made in The US are actually made for Toyota by Subaru!).

However, the increase in Subaru sales over the past few years has led to a decrease in Toyota production at that plant, as Subaru needs that capacity for the production of Legacy sedans and Outbacks.

You’re right VDC… I knew I was forgetting someone, I just couldn’t remember who!

Unions are loosing, Hostess, crystal sugar etc. The american worker is being downgraded in pay benefits and workplace safety. CEO’s are doing well, there are so many jobs without benefits, sure I will probably be ok, but the looming threat of the new generation of workers with no benefits, looming social security cuts and potential privatization, defunding of safety net programs to afford tax cuts for the rich appals me.
Throw in recent fear mongering like Auto union loses historic election at Volkswagen plant in Tennessee and I think we are headed in the wrong direction. Could throw in voter issues, gerrymandering, people too busy to vote or care, doom and gloom for the average worker, good times for the ceo.

Barky, I agree. Obamacare has killed employer-provided group health insurance for companies of less than 250 employees and jobs for the bigger companies. A senior manager I know for a global company told me his company calculates that Obamacare will cost their company $17million annually… and they’ve had to scale back future expansion plans to compensate… which means a whole lot of people that would have had jobs with benefits don’t have jobs at all. Add to that the looming SS cuts you mentioned, the total disappearance in the private sector of pensions (which were commonplace in the '50s and '60s… and even into the '70s), and a long term anemic economy, and the future is pretty scary. My granddaughter will definitely grow up in a far more austere and insecure world than I grew up in.

@Docnick
The chief photographer for the college newspaper had a Speed Graphic, the standard US news camera at the time with the big viewfinder frame and large film pack. They were very rugged and the joke was that you could club a rioter into submission with it and then take his picture.

I know a little about lugging those beasts. Several decades ago (hate to think exactly how many), before the internet, I worked at a Real Estate Multi-Listing Service, photographing listed homes. We used Crown Graphics and Speed Graphics and I believe, Kodak Ortho-Screen B&W cut film, no enlarging necessary!

They had already been phased out by 35mm and we could pick them up with Zeiss lens for about 15 bucks, I believe. I had to load the film holders in the darkroom before starting out each day. A large, heavy wooden box held the 2-exposure film holders. We threw the whole works, wooden tripod and all into the car trunk and drove from each home to the next, rain and shine.

I had to throw something over my head in the bright sun to see the image before inserting the film. I used a Gossen Luna-Pro exposure meter before I got as good as the Gossen with just my eyes.

Back to Chinese cars…
I seem to recall that Malcom Bricklin (?) was supposed to start importing a U.S.-compliant Cherry automobiles some years back. I wonder what ever happened to that initiative?

@“common sense answer” was doing real estate photography as a sideline in high school, with a bud of mine. Sure we used film cameras and delivered black and white photos for realtor use, I think $7 was the going price per pic at the time. Bigger price, more pics, more money. Think I had a honeywell pentax at the time, Had some pics published including one of a bug in the auto show a wrought iron vw bug, similar to this! 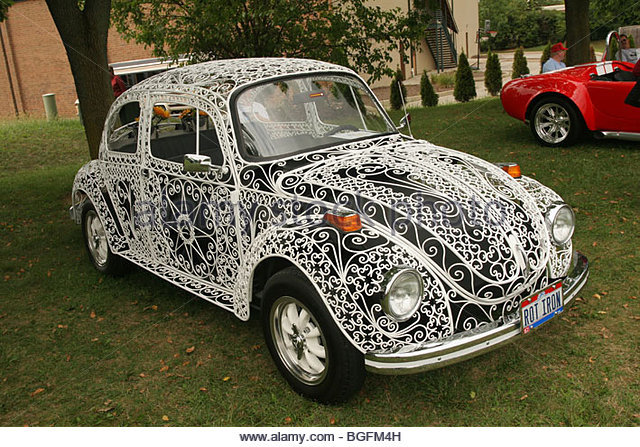 @“Ed Frugal”, manufacturing has been moving to the US from overseas. Mercedes Benz, BMW, VW, Toyota, Subaru, Honda, Hyundai, and maybe others assemble cars and trucks here now. Electronic manufacturing is also returning to the USA. A couple years ago, a Baltimore company was the subject of a Sunday business section article in the Baltimore Sun. They were growing because they are close to the buyers. When there were problems with Chinese manufacturers, the US buyer had to send someone to China to straighten things out. The language barrier was big enough that talking over the phone or through a web meeting didn’t solve the problems. It took nearly a month to straighten out problems. In the meantime, nothing got done. It took a few days to fix problems at US manufacturers.

I’ve always assumed we already had Chinese-made cars being sold here. Maybe not every last bit and piece, but at least important parts of the cars offered over the last 10 years here in the USA have been made in China, and shipped to the USA to be bolted on, right?

We each had a detailed street map covered with clear plastic and laid-out the home locations on the map each day. The map had concentric circles, focused around the office. I believe anything in the inside circle paid $.80, next circle paid $1.60, Next $2.40, and so on…

@GeorgeSanJose, idk if I have this right. The Canadians are driving Chinese made Honda Fit while the States gets the Mexican made Fit