I have a 2012 Nissan versa. It start rough idling and very weak acceleration. Long story short, started smelling fuel periodically in the Cabin. Got a generic airflow code trip and a cylinder 3 misfire. Tracked the smell of gas outside of the car down to the evap system but couldn’t see any visible leaks. Filled up my tank with gas and had liquid gas coming out the vent hose. The vent hose on the versa is stuck right into a frame rail so as it leaked it ran down the frame leaking all over the rest of the evap system. I’m pretty sure the canister must be shot now if all that fuel is pushing through there, but any ideas on what would have cause the problem. I may be wrong but I’m pretty sure this is causing all the performance issues and the codes.

There’s a device in the EVAP system called the overfill check valve. Also known as the roll-over check valve. 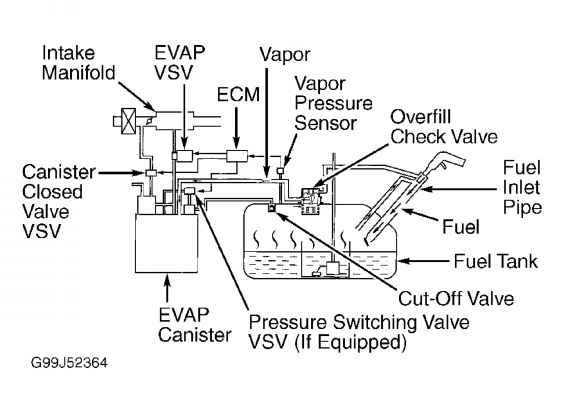 If this valve fails, gas can be forced into the charcoal canister and out the vent hose.

Thanks for the reply. Could that lead to very poor engine performance and misfire as well. I just removed the purge valve from engine bay and the switch opened when 12v was applied. Same with the vent solenoid.

If the canister is saturated with gas, the gas tank can’t vent as fuel is being drawn out.

And that can cause all kinds of problems.

I figured the canister is shot, I’m trying to find what cause it to be shot to begin with so i dont reck a new one. The day i filled gas it was only filled to about half a tank before it came leaking out the vent hose to the canister. Purge and vent solenoids seem to be working just fine.

Took the canister off. It was saturated, which would have to be if it came out the vent hose but I pour a good deal of gas out. I know I need to replace but dont want to drop 250 again and something up the line refloods the new one

I had a motorcycle I bought once that was running poorly. The canister was loaded with gas. I took it off, emptied it as best I could, lots of shaking involved, and then just laid it out in the sun. I figured if I could dry it out, maybe, just maybe, I’d get a cheap fix. It worked!

When was the last time anyone saw an EVAP canister on a motorcycle?

When was the last time anyone saw an EVAP canister on a motorcycle?

As a thought, do you stop filling the tank when it clicks off? Sometimes people like to top it off, which can shove fuel down the line. (It’s meant to collect fumes only.)

On a side note, Fiat had that prob w/o overfilling, on some early models when they came back to the US. It can cause most of the symptoms you mention.

Does loosening the gas cap help w/the performance problems? If so, that indicates that a vacuum is forming in the gas tank as you drive and preventing enough gas from reaching the engine. Important clue.

If loosening the gas cap has no effect on performance, then the cause of rough idling and low accel may be that the air fuel mixture is too rich. Another important clue.

Are there any rich/lean related diagnostic codes?

A shop w/the Nissan scan tool would probably start by verifying all the electronic controlled evap valves actually open and close upon scan tool command. That’s probably the fastest route to a solution if all else fails.

re: evap hose leak during filling.

When you are filling your gas tank the air & vapor above the gas is forced into the canister, where it is supposed to be separated, the gas fumes stored in the canister charcoal, and the air expelled through an open valve to the atmosphere. So it seems like you got a problem with one of these

I tested purge and vent solenoids outside if vehicle. Both operated. Purge remained closed then open once current is applied. Vent remaining open then closed when applied. Could they be working independently but malfunctioning under vehicle and computer control? Drained the canister, I feel there is some improvement but could just be placebo. I’d like to replace but dont want to refold. Again, it flooded with fuel while I was filling on empty and I was no where near a full tank when I noticed it coming out

The canister has to allow free flow in the proper direction before the other stuff, valves etc, are able to do their job. Suggest to remove the canister and bench test. Lay it on the bench, on the longer side, with the mounting bracket up. there’s 3 holes, right to left, on a downward trending diagonal. Call the one of the upper left 1, the middle, 2 and the lower right 3.

Put your finger over 1. If you blow air into 2, it should flow freely out of 3. Next apply vacuum to 1, verify vacuum is transmitted to 2 & 3. Finally put fingers over 1 & 2, and verify there’s no leaks when you blow into 3.

If all that seems to be working, and the valves near the canister seem to be working, next place to look is the evap vapor cutoff valve in the tank. That’s supposed to close during re-filling when the tank is full.

The only other thing I can think of is the airflow diagnostic code you say you got, which I presume is a maf code. One of the inputs to the ecu’s purge algorithm is the maf sensor output. So there may be some relationship there, preventing the ecu from opening the purge valve. That could eventually saturate the canister. Other intputs to that algorithm are: crank&cam pos sensors, ects, a/f sensor, tps, accel pedal sensor, battery voltage, fuel tank temperature sensor, vehicle speed sensor

A CAN bus problem could be involved, but that would usually trigger a slew of diagnostic codes.

Appreciate the detailed reply. I’ll give that a shot.