My 2002 mini 6 speed stick licks to get stuck in the I park it in when its cold. After driving in that gear for 4 minutes it warms up and let’s loose. Any suggestions?

I’m not sure if I understand. Is it a manual or automatic? You’re saying it gets stuck in park?

As it stands currently, I don’t think that anyone will be able to answer the OP’s question properly.
Perhaps the OP can have a native speaker of English re-post the question in standard English.

Sorry about my illiteracy. I did this on my phone and the keyboard is always auto correcting. My Mini is a 6 speed manual. It gets stuck in whatever gear I Ieave it in after it’s been parked in really cold weather. I park it in second gear now, so if it freezes, I can drive about 25 mph until it thaws.

Does it really get that cold there that the linkage literally freezes?

How many miles on your Mini, and has the trans fluid ever been changed? Its been 11 years, and, unless otherwise stated in the owner’s manual for more frequent, I’d recommend changing the fluid in your 6speed every 30-40,000 miles or 5 years with the fluid recommended in the manual. And I don’t believe in ‘lifetime’ fluid. Change it and you’ll be happier.

I agree that changing the trans fluid is the way to go. If that doesn’t work, then lubing or repairing the shift linkage may be necessary.

+1 to VDCDriver - lube the linkage and change the fluid.

You NEVER need to change the fluid/gear oil in a manual transmission. It is a lifetime lube. A manual transmission doesn’t get hot enough to cause the fluid or gear oil to break down. I have over 254k on my 02 Saturn with the original fluid still in it, 181k on my truck.

I did have this same issue on a Toyota once, the rubber boot that covers the linkage where it goes into the transmission split and water got in there. I had to thaw it out, remove the water, re-grease the linkage and replace the boot. That transmission was a top shifter.

I agree with Keith, and the oil in the transmission must be too heavy.

Well, I disagree with Keith. I’ve had numerous manual transmission cars and trucks over the years. From Ford to Toyota to Suzuki, all had transmission lube changes in the maintenance schedule, usually at the 60k interval, except for the Suzuki. It had lube change in transmission, transfer case, and both diffs at 30k.

Roll the dice if you wish. Lube is cheap. Transmisson failures are not.

I have the same problem with my 89 tracker it literally freezes. I have to stick a hair dryer through the opening in my shifter rubber pointing down to get it unstuck. I changed my tranny fluid last summer and it did it again this winter. I havent been able to find anyone with knowledge enough to help fix the problem. Seems pretty obscure as there has been alot of decent mechanics (local) have a look at it and were dumbfounded as well. Maybe someone on here has dealt with this problem?

Read the answers to the original question. I’d suggest checking everything listed. Especially a cracked boot that lets water into the linkage - you know, for a 29 year old car

It gets stuck in whatever gear I Ieave it in after it’s been parked in really cold weather.

Have you tried leaving it in neutral?

I removed the gear shift boot (part of the center console) on my Corolla to remove the fuel pump relay last summer, and while it was removed I took the opportunity to remove all the jelly beans I’d dropped down there. I noticed the area under the gear shift lever is greased in several spots. Perhaps in your case all that is needed is to renew your shift-lever grease. when you blow the hair dryer heat into that area, I’m guessing what’s happening is the heat is softening what’s left of the 29 year old grease.

Whether the maintenance schedule mentions it or not, IMHO changing the tranny fluid is well worth trying.

In addition, many trannys now use cables to move the linkage, like the one in the example below (NOT a Mini, but it illustrates the idea). If moisture gets into those cables, that can freeze in extreme weather. If new fluid doesn’t help, you may want to consider these cables as a possible cause. 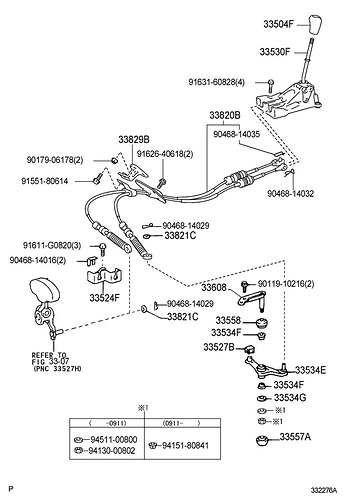