J.D. Power is similar to the Better Business Bureau in that they are both “pay to play” operations, wherein good ratings are… purchased.

The manufactures have to pay a very large fee to put that award rating in their ads . So I and others really don’t have much confidence in a JD Powers award.

Really? I’m skeptical. Provide some sort of verification of these assertions. Do you say this because you don’t believe what they say? How could any of us know that J. D. Power and any auto manufacturer engaged in this type of conspiracy?

I rented a Renegade which you say is on the same platform. I liked everything about it except I couldn’t get two suitcases in the back, the lack of acceleration, the controls, electronics, and seat comfort. I really liked the way they looked though and the size and that Jungle Green kinda grows on you as long as it’s someone else’s car. Otherwise I would have bought one but I’ll just keep the Pontiac for now.

Back in the late 80s or early 90s J.D. Power did get caught cooking the books; taking money for skewing reviews. This made national news at the time.

Top management blamed it on a few slightly below managers. They canned a few sacrificial lambs and moved on although I tend to think top management was involved also.
A wind and a nod while using care to make sure all fingerprints stopped before they reached the top…

They use the same platform and come from the same factory in Italy, the 500L is related but uses a 2wd version of the platform.

Really? I’m skeptical. Provide some sort of verification of these assertions.

My recollection is the same as ok4450’s:

Back in the late 80s or early 90s J.D. Power did get caught cooking the books; taking money for skewing reviews. This made national news at the time.

I put no weight on the JDP initial quality numbers, that’s the owners reaction when the bring the car home. I’m interested in long term reliability.

Me too. I think it’s often related to the electronic features on new cars. It might be that they don’t work, it more likely it is that the owners don’t know how to use them. The touch screen interfaces have caused people trouble for several years. IIRC, Mazda gets high marks because they lag other manufactures in implementing these features.

Years ago I read in a book, have no idea which one, on car design and engineering. They said they had to design cars so that anyone could use them. Had to be simple, turn the key, put it in gear, and go. So if we have to be critical of half of the population for not being able to figure it out, do we blame the engineers or the general populace? We turn the geeks loose on car design unsupervised and away we go.

This is all I could find. They aren’t at arms length like Consumer Reports, but Power has to fund their work somehow. For those not interested in reading the reference, Power sells big trophies to the manufactures and sells them the rights to use their results in advertising. It doesn’t say that they actually cooked the books. 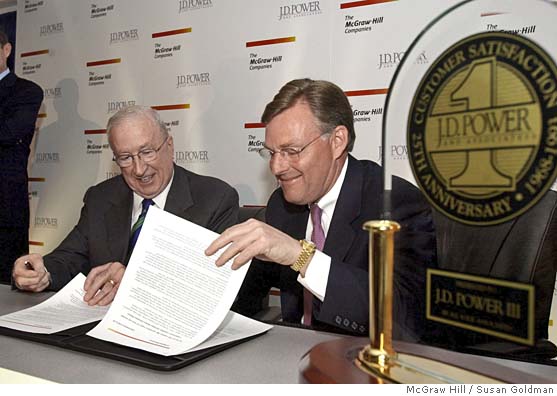 Take a look at almost any ad for cars or cell phones these days, and you'll see one or...

Here’s another article in Jalopnik. It doesn’t say that any company paid to change results, just that they paid for market research and much later for rights to use the Power results in their ads. 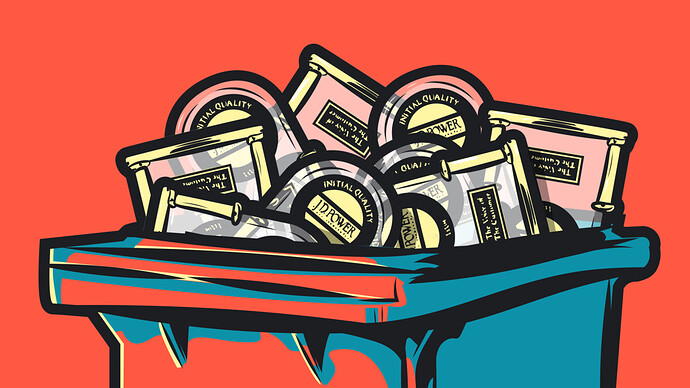 Everything You Ever Wanted To Know About The JD Power Awards

People who know him call him Dave. You probably know him by the eponymously-named company, J.D. Power and Associates, which I used to think was fake. It is not. It is extremely real and, I have learned, one of the most hilarious threads running...

Regardless of whether people bribe JD, CR, Motor Trend, etc., I just take everything they say with a grain of salt. I don’t care how it was for a year but would like to know what it was like after 100,000 miles or so. If not that particular car, at least a similar engine and trans.

I remember hanging out at the gas station when I was about 10 and a guy from New York came in. Must have been a salesman or something but I remember him saying that he drove all the way from NY to MN on $3.50 worth of diesel in his Mercedes. That had an impact on me and figured into my decision to buy a diesel. Another mechanic told me if you are on the road a lot, you want a Chevy or a Ford because everyone will have parts. I just value more people telling me eyeball to eyeball their experiences, than rating agencies.

I think an argument should be made that “long term test” should not be taken to mean “good measure of reliability.” Even the worst cars for sale in the US can usually make it a year before anything overly major breaks. A 9 month test is a great way to get a good idea of how living with the car will be from a driving satisfaction perspective - one that you can’t always get with a 1 hour media drive. But it’s not going to be very good for determining what kind of problems you can expect to see over the service life of the vehicle. At the 5 year mark I’d be willing to bet that Fiat will have been in the shop a lot more often than, say, a Miata.

8000 miles on the 500x. Not a heck of a lot, but they have had cars that needed repairs in the year they have it. My comment about reliability was more about Fiat’s reputation for poor reliability, and given that at least one thing should have gone wrong by now.

They’ve had it for 9 months and someone on their staff drives it every day. They love it and say it has been very reliable.

I wouldn’t call anything just 9 months old reliable. My 84 GMC pickup was extremely reliable for the first 4 years of ownership…then the wheels fell off at around 85k miles. Got so unreliable I had to get rid of it…costing me more money to keep it then buy a new truck.