I for as long as i have been driving have had what i thought were alignment issues with my car and would routinely take it to be corrected even when the car was only ever so slightly out and well within spec… or if the steering wheel was slightly off centre.

Even with these adjustments i still always felt something was off… and never got to the bottom of it.

if the alignment is good… i do my tyres before every drive to the recommended psi/bar at a garage forecourt or digital inflator… then what am i feeling when driving ?

However my new digital one had .0.5 psi accuracy…

Anyways after inflating my tyres as normal i decided to check my pressure and noticed that.

can 1pi/1.5 psi difference from tyre to tyre really have been the cause of my misery while driving ??

Whether it makes a difference is highly dependent upon the car, the driver, the tires themselves, and the driving environment. There is no “one size fits all” answer.

can 1pi/1.5 psi difference from tyre to tyre really have been the cause of my misery while driving ??

Yes, it could. You proved that to yourself when you adjusted the tire pressure. If you want to confirm this, pump the tires back up and drive it. Does it feel funny? Let the air back out and drive it again. Is it back to being OK? Confirmed!

I’d say you are quite a sensitive driver as most would not be able to feel those changes. What kind of car is this anyway?

You have to be the only person in the world to do this.

What vehicle are you driving and where are you located ?

Yes, it could. You proved that to yourself when you adjusted the tire pressure. If you want to confirm this, pump the tires back up and drive it. Does it feel funny? Let the air back out and drive it again. Is it back to being OK? Confirmed!

It could all be subjective. You are looking at subtle differences. The only way to tell is via a blind test. Have someone else set the tire pressures, either matched or not, and not tell you which it was. You test drive, mark it as good or bad. Repeat several times, and then check the score. But this is probably too complicated to do.

its just a seat toledo, but i have felt it with every car i’ve ever driven to the point the alignment guys look at me funny when i say something feels off… and its within spec and leave feeling deflated… the only time i didn’t feel it was when i drove a van that had tires with a harder sidewall…

I’m a cab driver so tend to put mid range/budgets on as blowouts and such can occur and was always told to never buy anything too expensive due to the likelyhood of such things happening on a regular basis.

I just never thought for a second that the air inflaters at petrol stations would be out that much that it could be the cause of my driving misery lol!

it seems that 1/1.5 difference from left to right really annoyed the crap out of me constintly which i guess was amplified by me driving for 10/12 hours at a time… it wouldn’t be something that bothered me to much just driving to the shops and back.

I noticed it most when cornering or turning…

it amazes me then how all these other drivers using petrol station air pumps don’t feel it…??

i guess it’s the princess and the pea.

honestly this is a legit question… i just wanted to know if 1/1.5 psi difference from all 4 corners could cause a slightly annoying drive.

I could feel it through my bum on the seat… infact just today i set them all to 36psi but let 1psi out of the rear right just to test it and again i felt it when driving.

the inaccurate petrol station air pump adds to the issue…

… and it doesn’t help the situation when people drive their cars, and then check their tire pressure.
Tire pressure should be checked before driving, or after driving–at most–a couple of miles.

from what i’ve read a lot tyre testers/designers are so sensitive to this sort of thing they can feel the difference while driving.is it possible i’m that sensitive to slight differences ?

yeah i do check them cold but as i saiid if it feels off, i then feel the need to try and correct so head to the nearest one to inflate/deflate… its under a mile away… but yeah i’m gonna stick to using this little digital gauge cause it’s fantastic!

It didn’t come across in any way other than an honest question from a curious observer. To me anyway. You are welcome to continue post such questions here any time you like.

My own perspective is that tire pressure differences between ties do make a difference in how well the car tracks, and that overly high pressures all around tend to make small psi differences more noticeable. In other words if the average inflations for all 4 tires is 35 psi, then a 2-3 psi difference between tires is more noticeable than if the average psi is 30. I know that seems counter-intuitive, but that’s my experience. I’ll add that some pulling is normal on most roads b/c of the tilt of the road. The road isn’t perfectly flat left to right in other words. It needs to be tilted so that rain water will run off to the side.

Another idea, one poster here made an interesting comment the other day, that if the toe is too close to dead ahead (0 degrees), which is what you’d guess would cause the best tracking, in actuality that can cause the car not to track straight ahead properly.

It didn’t come across in any way other than an honest question from a curious observer. To me anyway. You are welcome to continue post such questions here any time you like.

I wholeheartedly agree. I saw absolutely nothing in your post that gave me a hint of an idea that this might be other than a question about peoples’ sensitivity to alignment and tire pressures.

The car itself makes a big difference. There are cars that are very skittish, and the slightest differences can be felt. There are others that seem to track straight down the lane without regard to less-than-major differences. There are countless variables that go into the equation that determines this, but that’s the net result.

And tires too make a difference. Some tires simply track far better than others. Some don’t seem to want to. Small pressure differences can make a bigger difference with these.

I suspect our OP is extremely sensitive. So the first step would be to a bit of desensitivity training. Not sure how to do that, but I am sure Google knows all about it.

I also suspect we are dealing with a very light car. That is not helping matters. If the OP is overly sensitive, a larger car might be a consideration.

Oh and do we need to talk about spelling the word tire. LOL

Oh and do we need to talk about spelling the word tire. LOL

Yup. It should be spelled “tyre”. But we here in the colonies invented our own spelling.

Yes, that is true. I was shock absorber development engineer developing shock damping levels by seat of the pants as well as data. I can feel 2 psi difference in the tires as well as shock valving changes that cannot be differentiated on the test machines.

But not everyone is that sensitive. We used to say; Ride Engineers are born, not made! People’s sensitivity varies more or less linearly across the population. Some, like you, can tell 1.5 psi difference and some can’t recognize a one ton truck rides worse than an E class Mercedes.

Well the tyre pressure i believe is only half of the issue… i also have an ongoing alignment issue that nobody seems to be able to resolve and i’ve had it on at least 5/6 hunter machines all with varying readings but within spec.

Unfortunately as the car is used for taxi/cab work and plated it is non returnable and only has 20,000 miles on it… and has been like this from the moment it arrived at my door.

basically the short of it is the car wants to steer to the right when the steering wheel is centered ( i centered it myself using tape on the dash for them) but also has a slight shoulder lean to the left… made more obvious when the road is crowning on the left side.at which point it pulls slightly left… so i’m constantly having to adjust the steering wheel all the time and cornering feels awful,

There are no noises coming from the car and i’ve had mechanics have a look for anything that might be the culprit but found nothing… i can post most recent printout everything looks to be good on it so have no idea.

Forgot to mention it isn’t tyre related as i’ve swapped all four tyres for different brands and made no difference… also rotated them. 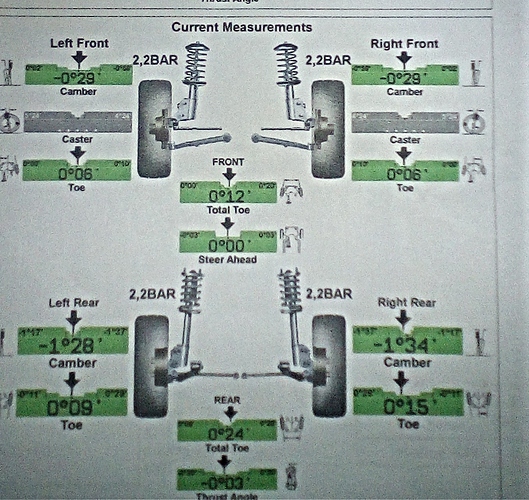