Ok so I noticed last night during a long drive (about 4 hours round trip) that my headlights seemed to be dimming and then going back, every minute or so. I thought I was just tired and maybe it was a car behind me or something.

Then tonight, my husband (who was driving the car) called me and said that while he was idling, our check engine light (which has been on for a while - don’t worry, I know what that is) would noticeably dim and then rebrighten, simultaneous to the car chugging a little harder.

Is this the alternator? I ask because this car is only worth $1,000.00 at best, and if my brother-in-law can’t diagnose and fix it cheaply (he can totally replace an alternator no problem), then I need to go car shopping.

Re-check the DTCs. Even if you know the original cause, other problems could crop up and set more codes. Also, have the charging system checked. A simple check with a multimeter can tell you if the alternator may be a problem. The voltage should not drop below 13V with a healthy alternator.

Now when you say “about to die”, does that mean I’ve got… days? weeks? hours? I ask not because I plan to procrastinate, but because three nights per week we need to use two cars (we have a Volvo also) and I want to know how likely it is that it’ll die on one of us while driving.

If I get it checked at Auto Zone or wherever, and it is the alternator, I will order the part from RockAuto today and get it installed Tuesday.

What is the lifespan of an alternator anyway? This car has about 95k on it. Do they just die after a while - or does it all depend?

The lifespan of an alternator is…well, it varies, but let’s just say that it would not be unusual to have to replace one at 95k. I have seen people driving with alternators that are doing the same thing as yours for weeks, maybe even months, so it is hard to say how much life is left in your alternator. While I urge you to have the charging system checked and, if necessary, to have the alternator replaced a.s.a.p., it is probably not going to die right away.

That is all great information. Thank you.

Do you think that me taking it to Auto Zone for the free check or what have you, do you think that they have enough basic knowledge to be able to diagnose the alternator? I.e. hopefully they should know what volts should be going where…?

The “Component Technicans” at Auto Zone are not a replacement for a diagnosis from a mechanic.
They can just point you to one.

At Auto Zone, I watched the guy test the volts coming from the alternator and they never went below 13.99 from what I saw. So the Alternator appears to be good.

HOWEVER… is it possible that THIS is the culprit? (link is to a photo of a corroded wire) 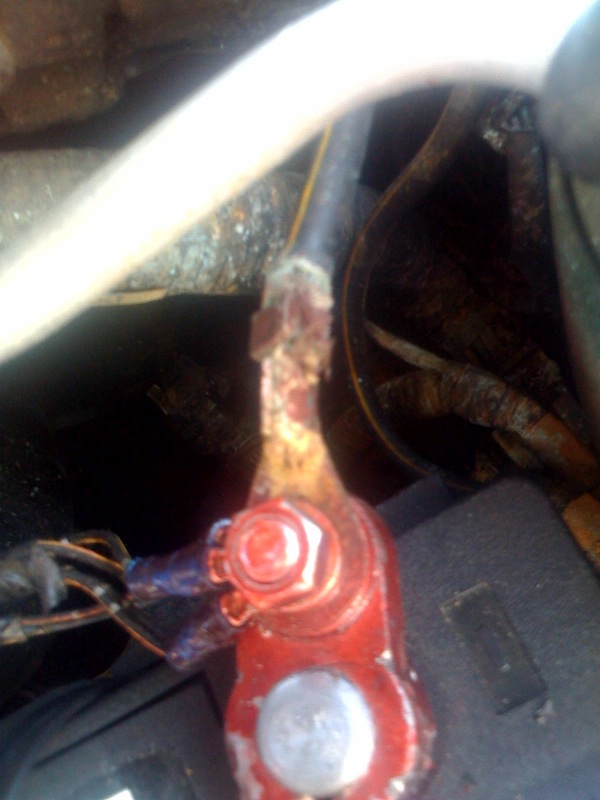 That’s on the negative side. It’s pretty damn corroded, though the photo is blurry.