What are the cars that have the easiest access to AC evaporator and heater core. I find these to be the two hardest things to replace on my own.

1932 Ford Model B. Easiest because it didn’t have either AC or a heater.

What are the cars that have the easiest access to AC evaporator and heater core.

The ones where someone else does the work .

it would be an older truck, because they would be in the engine bay, so you wouldn’t have to remove the dash

My 72 nova was not too bad for heater core, no ac though.

Two years ago,I had to pull the evaporator on my 1979 Toyota Celica in order to change the pressure switch and expansion valve (both are contained in what Toyota calls the “Cooling Unit”.

Not too complicated: Remove glove compartment door (three screws), glove compartment, and you have all the room you need. Three bolts release the air duct next to the cooling unit, another three bolts for the unit itself. The hardest part was sizing a wrench to remove the low pressure hose that runs back to the compressor -29mm. Had to wait a week for Home Despot to get one in. Don’t know about the heater core. In 41 years, I never had a problem with it.

I think the 80s was about the beginning of the end for evaporator/heater core simplicity. The 80s era SAABs had the evaporator under the hood so not quite as bad.

Back in the 80s and maybe the 90s on Subarus imported from Japan A/C units were installed at the port. Many people thought they were getting “factory A/C”. Not. The installers worked in 2 man teams; one under the hood and one under the dash. They got paid something like 20 bucks each and installed those units in under half an hour.

The problem was that those A/C units had a 90 day warranty. Quite often screw-ups or leaks would not be discovered until after the car had been on the lot for longer than 90 days and then sold. Technically the warranty was up already before the customer even took possession of the car and there was a lot of ill will from mechanics getting coerced into fixing someone else’s mistakes for free.

. Many people thought they were getting “factory A/C”. Not. The installers worked in 2 man teams; one under the hood and one under the dash.

I had a friend (may he RIP) who worked at chrysler dealership’s tell me of the same thing being done at the dealer’s shop’s.

Back in the 80s and maybe the 90s on Subarus imported from Japan A/C units were installed at the port. Many people thought they were getting “factory A/C”. Not.

That wasn’t limited to Subarus, and it wasn’t just in the '80s & '90s.
My POS '74 Volvo had port-installed A/C, and I recall co-workers with Hondas from the '80s whose A/C was also port-installed.

There is no such thing as easy access and work on anything under the hood on new cars, unless you are a high-paying mechanic with a PhD and a super computer.

A lot of 60’s, 70’s, and some 80’s vehicles had heater/evaporator case mounted to the firewall. 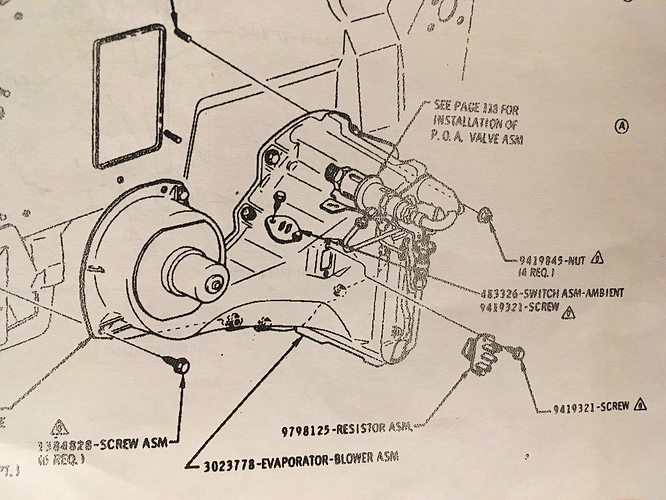 But that was when vehicles had a lot of room under the hood.

The Toyota Celica I mentioned above was the same way. I ordered it with A/C. A month later, I get a phone call: “Your car is here”. I was excited, with this being my first new car. When I got to the dealer, three mechanics were installing the A/C, which came out of a big box labeled “Toyota Air Conditioner”. No problems with it, except that they neglected to install the idle-up vacuum switching valve, which ups the RPMs when compressor is on. I didn’t even know about it until I compared it to my 1982 Cressida which has Factory air (they all did).

A lot of cars back in the 80s (Hondas, Nissans, et al) had many of their A/C units installed at the dealer.
Even back in the late 80s many Mazdas got dealer installed A/C units.

The Asian cars were pretty easy to do this on The bulk of the wiring was in place and the A/C kits were pretty much plug and play. Nissan trucks paid something like 6 or 7 hours for the install and after a few to get acclimated with they could be done in 3 or 4 hours.

I remember back in the late 80s a real oddball Subaru came in with an A/C that would not cool. Pressures were fine and the unit had just been installed by a Subaru dealer in eastern OK. I evacuated the system and during charging found it would only take 2/3 of a small can. WTH? Re-evacuated it and tried again. Same thing; 2/3 of a 12 ounce can was it.

At that point i took a flashlight and went hunting. Come to find out the condenser was 10" X 10" and the evaporator was the size of one of those small Hormel Black Label hams. I have no idea where those clowns at the dealer got that A/C kit but it was a total joke.
I wrote it all up and suggested the car owner pay a visit back to that dealer for a real A/C kit because that one was never going to work on an 80 degree day; much less a normal 100 degrees+ day.

I recently replaced the heater core on my 2000 Civic and when I started the engine dirty water flooded my floorboards. CarId denies their limited lifetime warranty. After several angry e-mails they informed me that the warranty section, which is three paragraphs, starts with “Limited lifetime warranty,” and ends listing various components that do not have warranties, including heater cores.
Great. I need to do it again and buy another heater core! How do I ensure that this one is good?!

That’s why I’m trying to find one that doesn’t involve tearing apart the whole damn dash to replace it.

I remember watching a video showing someone actually having to cut a metal frame member of the dash (below glove compartment) in order to R & R the evaporator. I recall it being a BMW, but not sure. The youtube poster claimed the procedure was right out of the FS Manual.

There are probably two dozen things I’d put on my ‘needs to have’ list above easy access to the heater core and evaporator.