Has anyone used E85 in a stock pre 2018 Camry? I have a 2017 and I’m not sure if it will damage my car. With fuel prices being what they are I might try a gallon or two to try it out

That info would be in the owners manual.

Just a couple gallons won’t prove or disprove anything. In my opinion you probably wouldn’t really save much if anything due to the decrease in MPG. You will use more fuel for a given distance, so you may just end up spending just as much on fuel.

I’m pretty sure it’s not designed for it and because of the lower energy content of E85 you won’t save any money.

Likely the acceptable fuel is listed on or near the gas cap.

Do NOT use E85 in a car that is not Flex Fuel which will be posted inside the gas filler door.

We don’t have any E85 fuel around here. I think the closest is in western MA. For the people who’ve seen this fuel…aren’t there warning signs to NOT use unless you own a flex fuel vehicle.

We do have a lot of flex fuel vehicles (mainly trucks).

Hi @Ewo79:
As others have noted, when I look at page 508 in your owner’s manual, it describes in detail what types of fuel you can and cannot use in your vehicle.

It does explicitly state:

DO NOT use gasoline containing more than 15% ethanol.

@Ewo79:
As others have noted, when I look at page 508 in your owner’s manual, it describes in detail what types of fuel you can and cannot use in your vehicle.

It does explicitly state:

DO NOT use gasoline containing more than 15% ethanol.

@Ewo79 there’s your answer as stated in the owners manual.

The money you “save” on fuel may be offset by having to tow the car to the garage, and having the fuel system cleaned out…

I don’t even like running E10 in my car…but it’s the most readily available fuel in my area.

“DO NOT use gasoline containing more than 15% ethanol.”

In that case he could add 1 gallon of E85 to every 20 gallons of E10 and save enough to buy chewing gum.

Except, even totally dry the Camry tank will only hold about 17Gal. IIRC.

Except, even totally dry the Camry tank will only hold about 17Gal. IIRC. 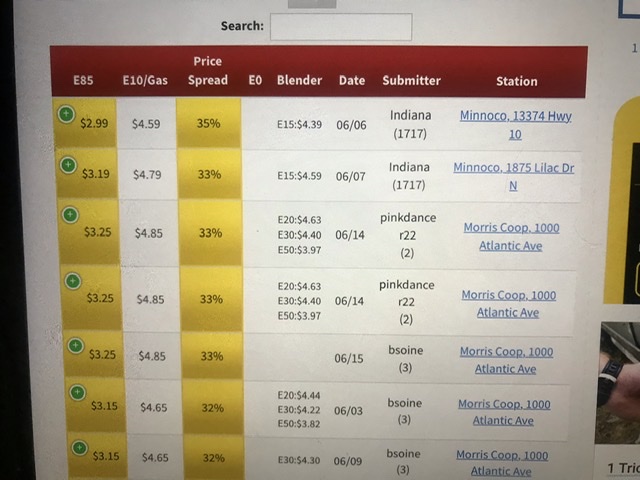 A few stations with 33% swing. So, it works $$ in that case. Just lower mileage and more fill ups. Site has old data though. Early June prices and recent prices.

Price doesn’t matter, it won’t work for the OP’s car.

E85 means 85% ethanol. Okay only if your manual/fuel cap specifically allow it (as for a flex fuel car). Ethanol is hard on rubber gaskets and hoses unless they’re specially made to tolerate it and is more prone to corroding metals (think fuel system), so unless your car was designed for E85 you might be asking for trouble down the road. It also might cause operational problems, throw codes, possibly do damage (but I don’t know).

Several people have said this vehicle is not rated for E85 . Also the person who asked seems to have left the building.