Many a true word has been said in jest! 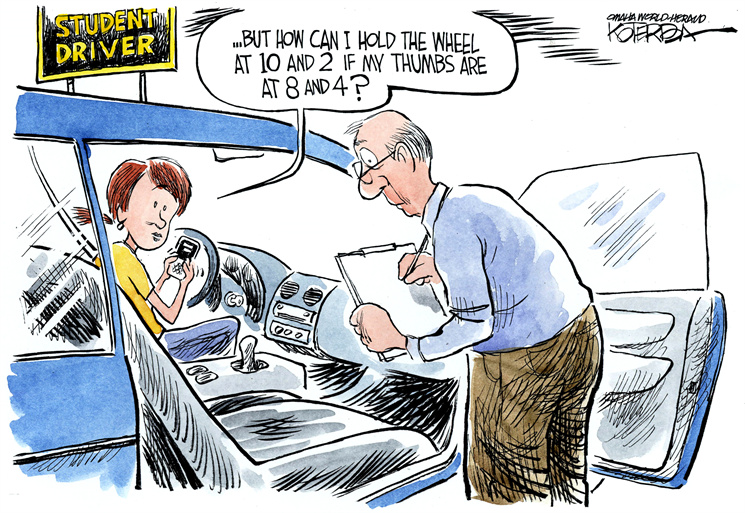 If you read U-Hauls rental agreement, it says all damage waivers are null and void if you are found to have been texting at the time of a collision. Amen.

U-Haul might be wisng up but the complaint I have is they do not give road test to renter’s. To be able to rent aU-Haul truck all you need to do is give them the money & they hand you the key’s they have no idea weather you can drive it or not. How many times have you seen one of them hit the low overhang;s at gas station’s? But the biggest complaint I have with them is when they is when they are pulling a trailer & pass me they have no idea of the extra length then pull back over before they have room. I have been cut off many time’s by people like that.

Another thing does U-Haul not require governer’s any more I seem to rember top speed of 45 now I have seen them going 65 & over?

They can write whatever they want but I kinda doubt it would stand up in a real case. I think it just depends on what the state penalties are if any and their rental agreement can’t really over-ride statute. Could be wrong but if a wheel comes off while they are texting and they kill someone, I don’t think their rental agreement would have much force. Negligence on the part of the driver but what was the cause of the accident? Texting or the wheel coming off. Just sayin’ as all. Everyone is getting into the texting act but nothing about eating a hamburger or adjusting the radio or fiddling with the GPS. So it’s still distracted driving and how the legal issues would shake out with an equipment failure.

I just don’t get it. I can be driving down the interstate, hear my text alert, and say “Hay Siri, read me the text.”

She reads me the text and asks, “Would you like to reply?”

Then she takes dictation, and asks, “would you like me to send?” If I answer “yes,” I will have received and responded to the text without ever taking my eyes off the road.

…and I’m a Gen-Xer who didn’t grow up with this technology. Why is this so hard for millennials who did?

Another thing does U-Haul not require governer’s any more I seem to rember top speed of 45 now I have seen them going 65 & over?

The last Uhaul truck I rented was governed, but it was governed at or near the state’s highest speed limit (70 MPH).

U-Haul might be wisng up but the complaint I have is they do not give road test to renter’s.

lol I think all the ones I’ve rented had the governor removed, but a couple could barely do 45. I drove one cross country and had to stop half way to tune the engine. Could you imagine the freeway if everyone used them as stated? The trailers still have stickers saying “do not drive over 45”. That’s so 50’s.

The one that gets me is a dude is retiring, barely able to drive his car, but they put him behind the wheel of a motor home the size of a bus, towing a SUV. Those things should require a CDL.

The one that gets me is a dude is retiring, barely able to drive his car, but they put him behind the wheel of a motor home the size of a bus, towing a SUV. Those things should require a CDL.

When I was still driving over the road that always got me & all the other driver’s but back then it was like U-Haul you give them your money you drive on down the road with no test. I hear some state’s in the last few year’s are requiring a CDL depending on the weight of the vehicle.

…and I’m a Gen-Xer who didn’t grow up with this technology. Why is this so hard for millennials who did?

Not hard at all for this millennial (or any of my colleagues or friends)…I think a lot of the problems we see are from the generation after the millennials.

Everyone is getting into the texting act but nothing about eating a hamburger or adjusting the radio or fiddling with the GPS.

You haven’t been to Washington state lately

such as, but not limited to, eating, smoking, reading or grooming. This is a secondary offense, meaning you must be pulled over for another offense, such as a dangerous lane change, to be cited for such an activity, and the activity interfered with safe driving. 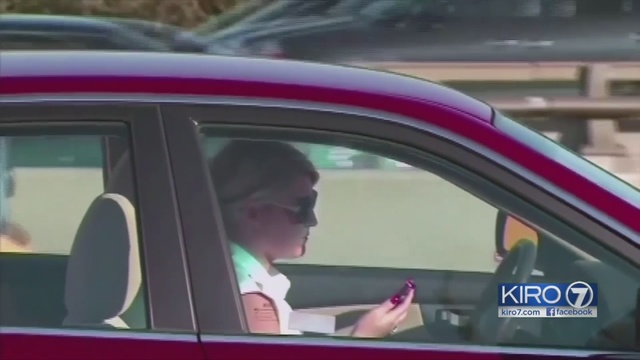 The new distracted driving law signed by Gov. Jay Inslee goes into effect July 23. Here are answers from the State Patrol to common questions about the new law:

@It_s_Me
Heh heh. Minnesota used to be known as the place where nothing at all is allowed but I think Washington is forging on ahead of us. When these folks get together for their annual conventions and share notes, it’s only a matter of time before it spreads. Kinda like the measles or monkey see monkey do.

According to NHTSA (and police reports), number of Americans killed due to texting is about 500 per year. Number killed due to alcohol (in cars) is over 10,000 per year. More Americans are killed in tire failure crashes than due to texting. Last, distracted driving has declined significantly since the iPhone was introduced. But boy, do I hate seeing people looking at phones as I drive towards them on a two-lane road.

I will not be offering thanks to Apple,
could it be the public service messages are working??More likely Bluetooth and voice to text is to thank.

Just reread, it says decling DEATHS not accidents.
We have lane change s/w , more air bags and such every year. It saves lives!!

Actually that was the point of my insurance agent when we discussed it. Sure texting is bad but the distraction comes more from the conversations on the phones than actually having them in your hand. So being able to talk hands free is really missing the point, not to mention tires. But yeah, texting, unless you can do it without looking at the phone, is a whole 'nother issue. The lobbyists won that one though and it all sounds good politically. Who can argue, just question the effectiveness to the stated goal.

I think ya’ll are right… it’s the conversation. Maybe it’s something about a phone conversation that unfocuses the eyes? They haven’t banned talking to your passengers… yet.

Maybe next will be filming videos? Youtube is full of those, with a author speaking to his audience. Leno’s Garage is my favorite example. He’s in a near priceless car, heavy traffic, waving his hands around… then cut to the car’s owner, white faced, clutching the seat for his life.

I think ya’ll are right… it’s the conversation. Maybe it’s something about a phone conversation that unfocuses the eyes?

When I first got a cell phone, circa 1999, I used it very rarely. One morning, on my way to work, I encountered what looked like a major traffic stoppage, so I called my office in order to inform the secretary that I would probably be 10 or 15 minutes late.

The secretary kept me on the phone for an extended period of time (What do I do about…? What do I do about… ?.. etc.) While I was talking to her on the phone, traffic began to move and, without being aware of it, I drove right past my usual exit! As a result, I had to drive about 5 miles to the next exit, turn around, and head back to my intended exit.

The bottom line is that I was only about 10 minutes late to the office, but if I hadn’t been talking on the phone, I would have been there on time!

Talking to Siri is no worse than talking to a passenger, which, surprisingly, takes less cognitive capacity than having a conversation on the phone (for some reason I don’t quite understand).

Let’s not treat all distractions as though they are equal, particularly the ones where you get to keep your eyes on the road. We’re human beings, and driving becomes old hat for everyone if you do it long enough, and when that happens, your goal should be to minimize distractions if you can’t eliminate them.

Focusing exclusively on driving has always been a good idea, even before “these days,” but I’ve always felt safer changing the radio station or taking a sip of coffee in light traffic on a dry straight stretch of road than when conditions are less forgiving.

…but thanks for the lecture. It’s just what I needed today.

takes less cognitive capacity than having a conversation on the phone (for some reason I don’t quite understand).

I have yet to see a peer-reviewed study that verifies this. I’d be interested to see it if someone is aware of one.

The hypothesis as it’s been explained to me is that when you are talking to someone who is in the passenger seat, they, too, are looking out the window and will stop talking if something dangerous is happening.

Based on that, I’m with you - I don’t get the reasoning.