Did people ever really kick tires?

Did people ever actually kick tires, and why did they do so??

I remember about 10 years ago I went to buy a well-aged Cadillac for my first car, and my dad started kicking the tires for some reason. He seemed quite certain that before you purchase a used car it is imperative that you kick the tires first. He knows nothing about cars (I doubt he could change a tire if he had to), so I’m assuming that if there ever was a valid reason to kick tires he didn’t know it.

A part of me thinks tire-kicking was a prank played on people in the 1960s who didn’t understand cars. The people who knew cars would tell their less mechanically-inclined friends that tire-kicking was crucial, and would laugh as their naive friends attempted to show their automotive prowess (and their ninja skills) by assaulting old junkers. Whatever the reason, my dad thought this was useful 10 years ago, and no doubt still thinks so today.

So my questions are…

-what were they looking for?

-are there any other archaic automotive practices that have no purpose, but still survive today?

Any help on this matter of great importance would be greatly appreciated. I’ve spent the better part of a decade (or 15 minutes on google) searching for the answer to this question, and thus far have come up empty handed.

I’m not sure if this is the origin of the term “kick the tires” in an automotive sense, but I recall hearing the phrase, “kick the tires, light the fires” in my flying days.

(Meaning, “Hurry up with the preflight inspection, so we can get the hell out of here.”)

Not sure which predates the other.

Semi Truck Drivers Don’t Exactly “Kick The Tires,” But Most Hit Them With A Stick. The One That Doesn’t Sound Like The Others Or Doesn’t Make The Stick Bounce Has Lost Its Air Pressure.
CSA

I Suppose That If By Kicking Tires One Found A Soft One (Shoe Doesn’t Bounce Off) Then One Could Think That The Car Wasn’t Well-Maintained Or Put Up For Sale With Existing Problems (Including Leaking Tires).
CSA

Just a guess, but kicking the tires to me would mean inspecting the most important and observable parts in the safety of a vehicle. Tire tread, pressure, mounting security, bearings and suspension components. All designed to coincide with the other expression; “keeping the wheels from coming off”. A good swift kick of the tires can tell you something or make you walk away with a limp.

additional comment I can across on another forum:
I did a little research, but couldn’t find anything to back my opinion, but I think it goes waaaay back to a time before pneumatic tires, when tires were solid rubber and the tires would sometimes work loose from the wheel.
Before starting a trip, it was a good idea to kick the tires , to see if any of them are coming loose from the wheel.

Some truck drivers do it to check tire pressure, and some thump the tires with a little “tire thumper” that looks like a little billy club for the same reason. However, it is a lazy man’s way to check the tires. There is no substitute for using a tire gauge.

I used to think kicking the tires was about testing suspension components, but again, it would the the lazy man’s way of doing it.

I think it is in the job description for school district superintendents to kick school bus tires.

There are dozens of habitual things like this that had their birth in days past. The reason to “thump” the tires with a tire thumper is to tell if the tread was seperating from the casing (as in a retread) now we don’t see retreads on passenger vehicles anymore but at one time it was common and you could tell from the sound if the tire was seperated.

I am sure you could also get a feel for the pressure in the tire by thumpimg it also.

But kicking the tires is more in the class of throwing salt over your shoulder than an actual credible diagnostic test.

That is one of those ‘sounds good’ explanations, but it’s really not correct. Cars had pneumatic tires almost from the beginning, certainly from about 1900 on. So the number of cars with solid rubber ‘tires’ would have been extremely small, not enough to influence how cars were checked out, I would think.

Here’s a picture of a 1901 Curved Dash Olds, you can see the valve stems:
http://www.oldsclubofflorida.com/Images/Members/Oldsmar_1901_CurvedDash.jpg

Sorry to disagree again…That is one of those ‘sounds good’ explanations, but it’s really not correct. Cars had pneumatic tires almost from the beginning, certainly from about 1900 on.
"Before Goodyear’s discovery of vulcanization, tires were made of wood or metal. They were heavy and fairly inefficient. Starting in the mid-19th century, rubber tires produced using vulcanization techniques became the dominant product for bicycles, carriages, and buggies. Early on, both air-filled rubber tires and solid models were used. Consumers quickly began to choose solid rubber models due to their durability, and air-filled tires were abandoned for a time."

So obviously, for quite a while, kicking the tires if they were solid rubber and if was indeed done, was NOT limited to the car. So it appears solid rubber tires were used on a variety of vehicles and prone to “kicking” for quite a while. So I for one don’t discount the explanation based upon your reasoning.

I hadn’t thought about horse and buggy days, I see your point.

p.s. - one reference went further back, to wagon train days, where folks having to buy a replacement wagon along the trail would kick the wheels to make sure they weren’t rotten.

Before you bought a used buggy or a wagon with artillery wheels (wooden spokes) it was necessary as part of the pre-purchase inspection to kick the wheel rims to see if any of the wheels had worked loose. This was also appropriate for a relatively light Model T Ford and other cars with wooden spoke wheels.

Way back when wheels were fisrt put on carts, a buyer didn’t kick a wheel, they put their foot on the top edge and gave a shove. That tested the overall suspesion, bearings, spokes, and rim. A person could get body weight behind the push and not dirty their tunic.

Fine for tunics, but I always found it more “revealing” to do an inspection in a toga.

Kicking the tires is a quick way to check the pressure. That’s why it was done. I use the thumb method now. Just grab the top of the tire with your dominant hand and press in with the thumb. It’s a lot less obvious than kicking the tire or dragging out the pressure gauge. I learned the method at a local vehicle auction lot. It really works.

I’ve learned over the years that with practice the “thumb method” described by missileman can actually disclose a low tire. If you press all four tires and one is low, you can actually feel the difference.

When helping someone look at used cars I’ll often do this if uncerain. A low tire on a test drive can manifest itself as a pull to one side and as unstable handling and uneven braking. Before test driving a car I like to be sure I’m at least ont driving on a low tire. Perhaps in days of old people looking at used cars kicked the tires to checkk for a low one for the same reason I do now.

Not saying you’re wrong, but a modern picture of an old car proves nothing about what it was originally equipped with.

This is typical of the pictures I’ve found. I have a few books about cars of this age, all the photos I remember have pneumatic tires after about 1900. This just seemed a good example. 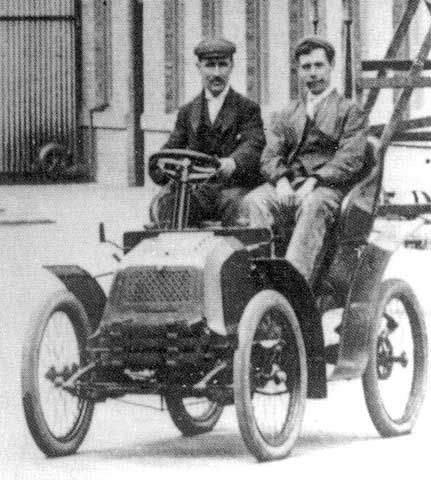 I have never kicked a tire on a car that was on the ground, but I have kicked a tire when the vehicle was up on a jack stand. I did this to see if the wheel was secure and the bearing tight enough and the the ball joints and tie rods were secure. this is certainly an interesting and amusing discussion though, and a real education in tire kicking.

I find the most effective way is to put your lips on the little valve thingy, and try to blow. The physics of the tire, and design characteristics, are such that an adult male in good health can push a bit of air into a tire which is underinflated. By performing this test, one can get a good evaluation of whether the tire is underinflated.

You can’t, with your own breath, inflate the tire to full operating pressure, but you can tell if it is unsafely underinflated.