Driving down road. Van cuts off. Have replaced spark plugs and wires, cam sensor, and coil. Computer scan says misfire on 1 & 4. Van will crank, runs rough at low idle,
but drove 250 miles even with misfire and it ran fairly well, except on upgrades. Any suggestions on where to go now?

What kind of van, engine, and how many miles on it?
The CEL illuminated and flashing?

Continued driving with a couple of bad misfires is causing more problems.

1996 Chrysler Town and Country. 3.3 engine, 374,000 miles, CEL is flashing (told that if flashing means it is a firing problem) Van was running great just prior to cutting off. Would compression go bad in 2 cylinders at once? There did seem to be a lack of power just prior to cut off, however.

I can’t tell you if compression is an issue at this point but I will say that at 374,000 miles a compression test would be a given. It’s possible sometimes that piston rings or cylinder head valves can deteriorate quickly; especially exhaust valves and even more so if the EGR systems is not functioning correctly.

If there’s not a compression issue I would be stunned.

A preliminary check could be done with a vacuum gauge as those are cheap, easy to use, and quick.

Sorry I’m not of much help but given the miles and in a shop setting, verifying engine condition would be the first step.

Good info oldtimer, but he did say he changed the coil pack. My guess is that if he screwed up the order of the wires, an easy thing to do, it wouldn’t be running fairly well.

I’m going with OK4450’s guess at this point. I’ve got a feeling that a compression test will be revealing.

Definitely could be a compression problem. But if an ignition problem, given the things already replaced, it has to be either the igniter, the timing sensor(s) that fires the igniter, electrical power to the igniter, or the replacement coil pack is bad or not installed correctly. OP needs to check those all, one by one.

A high voltage spark could be jumping somewhere it shouldn’t. OP could look at the engine running the dark, see if any sparks are seen jumping around.

A while back a poster here installed a new coil pack, but in a temporary way, and that caused a problem b/c it would get hot and fail. Coil packs have to have their heat dissipated, so they have to be installed all bolted down and the like, correctly. Some may even require a thermal transfer grease be used between the pack and the mounting point. If it runs ok at first, then as the engine heats up it starts to fail, that’s a possibility.

Regarding the coil. The new coil shows 1 & 4. Put the old one back on and still get the 1 & 4. Regarding compression. The plugs and plug wires were changed about a month before all this started to happen. The computer was scanned at that time and no codes were thrown. If it is compression, seems odd that 2 cylinders would display at once, but then again, over the month maybe one cylinder and then the other so that two code now. That would also seem strange to me.

My guess is that the two cylinders did not go down at once, but t didn’t start running poorly until the second went down. I don’t have access to the proper specs to find out, but if this is a “wasted spark” system (if anybody knows, please post) it may have taken the deterioration of the compression in both cylinders to totally stop any spark from happening.

Post the compression readings you get. This one will be interesting to hopefully help solve.

Test for spark at cylinder #4, if no spark the problem isn’t necessarily the coil pack but possibly the wiring to the coil pack or a failed driver in the PCM.

Thanks to everyone for your input. Will do as suggested and will post results. As mentioned, this might help someone else. BTW, someone suggested that I replace the ASD and fuel pump relays, as they are cheap and could possibly be involved. I will be doing that also.

My point in all of this is that (assuming compression readings are roughly the same on all cylinders) that the engine may not have been running as great as you thought it was. It’s like weak shocks; they grow on you over time and you become acclimated to the cushier ride.
Eventually low compression starts fouling plugs which then start knocking out other things in the string such as plug wires, coils, etc.

Another point behind checking compression is that it helps you determine at what point you quit spending money replacing this, that, and the other. If you’ve got some, or all, cylinders really going in the tank then it makes no sense to replace a boatload of parts because at the age and mileage it usually becomes one thing after the other and you certainly don’t want to get into that given the miles.

Thanks for the help. I have replaced both the ASD and Fuel Pump relays - the CEL went from flashing to solid once that was done - perhaps an improvement.

I checked the compression on all 3 front cylinders and all three read exactly 125. I am not sure what the ideal psi would be but at least all three are consistent.

I then reconnected the coil and hook a spark plug, grounded, to the #4 post. No spark. Move the plug to # 2 and got a spark. Then tried #1, no spark.

So whatever is going on is impacting the firing, apparently, of 1 & 4.

Since the plugs did not fire on 1 & 4, I do not think it is the wires as they are new anyway.

Any other recommendations would be appreciated.

Examine the wiring near the coil pack for breaks. Back probe the gray wire in the coil pack connector with a test light, this is cylinders 1&4 ground control. The test light should flash when running.

You can check cylinders 2&5 (dark blue/tan) or 3&6 (red/yellow) as an example of normal operation.

If the test light stays lit, no flashing, test the gray wire for continuity from the coil connector to the PCM connector.

One other thing which I have come across researching this: One article said the MAP sensor could cause the problems I am encountering. In testing the MAP sensor according to AutoZone repair section, it said I should be getting 5V between the supply and the signal connections - with the key on but not running. I get 0 Vs. It then instructs to check between the ground and the PCM terminal 43. Could anyone give me a clue where terminal 43 would be located?

A MAP sensor problem won’t cause a no spark condition on two cylinders.

Using a pin or sharp needle enter the connector from the wire side. The pin will come in contact with the metal crimp on the wire end. 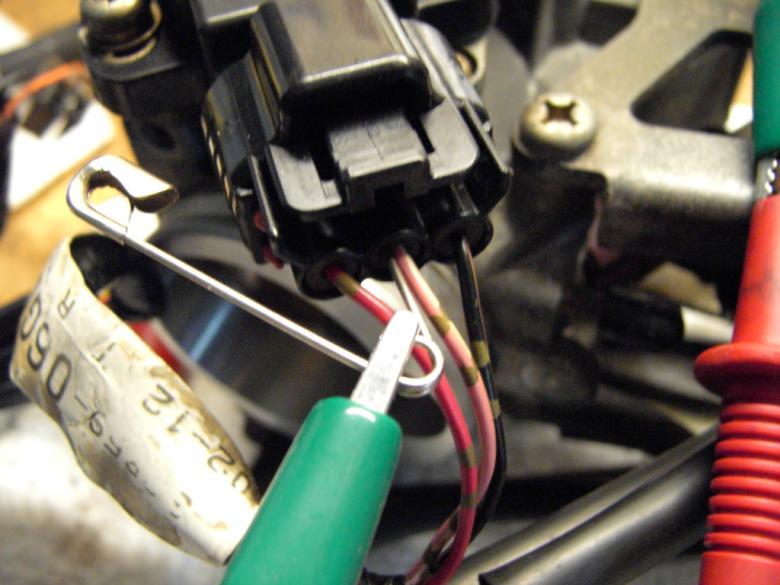 Nevada_545, thanks for the picture that helps, and thanks for the no-go on the Map sensor. The pin is a great idea, but do I not attach another clamp somewhere else to check the wire?