My cigarette lighter outlet in my trusty 1997 Volvo 850 at 152000 miles has stopped passing current so things like phone chargers and the GPS can not work any longer. Same with the heated front seats (though the passenger seat stopped working some time ago, but the driver’s seat is more recent). Is is possible that there is a fuse that has blown. If so, how do I diagnose this, or is this something that should go to a mechanic?

Yes a blown fuse is possible and the first thing I’d check. Your owners manual has the fuse box locations and likely a diagram showing where the lighter fuse and seat fuses are. They may also be printed under the fuse box cover. To check for a blown fuse, remove is and look. You can see through the fuse and see if the metal piece is connected. If is black and burned or you see a gap, the fuse is blown. See below. Replace it with the same color (and number) fuse available at any auto parts store. 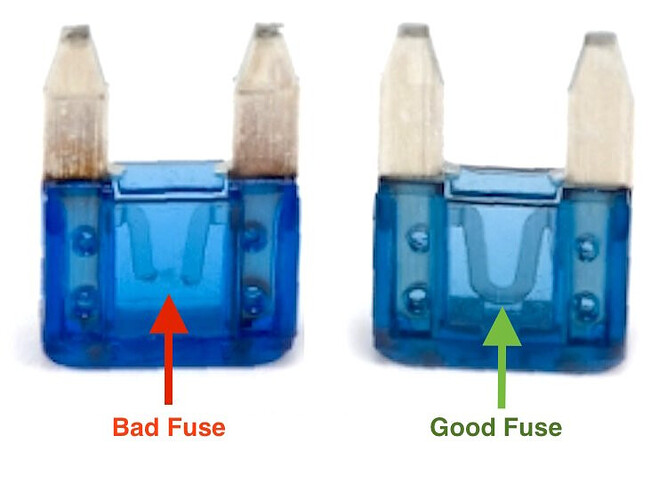 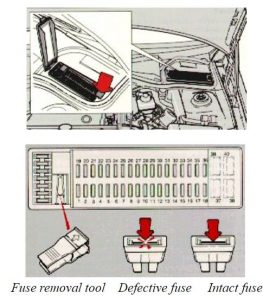 When checking the fuses, be sure to pull each fuse out and push it back in a time or two to freshen up the contacts. They have had 25 years to corrode. In my '91 (older style fuses), I had to move them every year or two to keep everything working.

Trusty? I wouldn’t trust that car to take me around the block. As for your electrical issue, in a different car it might be a simple matter of a blown fuse. I’d recommend you take it to a mechanic.

Thanks to @Mustangman and @Manolito, I finally realized how to check for a blown fuse in a car (at least the 1997 Volvo 850). A blown fuse was the issue for the cigarette lighter outlet. Conveniently, Volvo includes a few spare ones (one of each kind), so I replaced it and the outlet works now. I will have to buy a new 10A to have a spare.

The heated car seats may be a different issue though because I noticed that the same fuse handles both those and the power mirrors (but those work). @old_mopar_guy, why do you think that the car is not to be trusted? Many thanks to all who responded.

Because it’s too old.

Detecting electrical issues in 1997 Volvo 850.
Whats to detect, I don’t recall ever seeing a Volvo this old that didn’t have electrical problems.

Because it’s an old Volvo.

Thanks! Does that mean that I should take it to a shop?

Yes, unless you have a multimeter and know how to use it.

It would be cheaper to go to Wally World and buy a padded seat heater.

how to check for a blown fuse in a car

There’s another way to check fuses if you have a volt meter. Doesn’t require the fuse be removed. Most automobile fuses like the one shown in post 2 above have some exposed metal on the rectangular end that you see when they are plugged into the fuse box. On the bottom as they sit in that photo. The metal is connected to the terminals. If a fuse is working and the circuit is powered they will measure appx 12 volts on both sides. If one side measures 12 volts and the other 0 volts, the fuse is blown.

Yes, unless you have a multimeter and know how to use it.

I do have a multimeter and think I know how to use it. But what do I do with it here? Thanks!

OK, there are a bunch of wires under the seat(s). I will see if they lead anywhere worthwhile. Thanks!

Maybe you can dig up a wiring diagram somewhere, it might help you know which color wires go to the seat heaters.

You put it back in the toolbox and take that antique to a mechanic.

Do the orange lights that are built in to the heated seat switches come on when you turn the switch on? The bulbs could be burned out. The bulbs in there can be replaced. The problem with the heated seats is probably worn out heaters in the seats due to too much sitting in the seats.

Is old_mopar_guy an old guy who likes Mopar,

He rents a Hyundai.

Do the orange lights that are built in to the heated seat switches come on when you turn the switch on? The bulbs could be burned out. The bulbs in there can be replaced. The problem with the heated seats is probably worn out heaters in the seats due to too much sitting in the seats.

The lights come on. It seems reasonable that your suggestion with regard to the worn out heaters is correct. I will look into it over the weekend.

The light that I think burnt out some time ago was the one which indicates the clock and the temperature. It is only a minor issue at night, and does not seem to affect anything with regard to driving and my information that I need. I looked into fixing it at YouTube Vocational Training School, but it seems like a lot of work to get to the bulb so I decided to leave it as it is. I don’t believe that it is a fuse issue since it seems to me that the fuse is for the entire panel, but maybe I misunderstood.

But for this light, the heated seats and the blown fuse, I have not had any issues with the 1997 Volvo 850. The occasional bulb (headlights, taillights) has had to be replaced, but that has not been way out of line. (I wonder if the blown fuse was because of a Dell M3800 plugged in because that takes so much power that it does not work on airline seat power.) Yes, of course, it does not have the latest features (including newer important ones) but I think that it was among the first to have side-impact air bags. In any case, I thought that these cars were built to run for 250k miles or more, at least reasonably properly-maintained.