When I turn on the defrost the AC runs, which at subzero temps is really counter productive and just plain cold. Can I disconnect the AC in the winter? Are there makes of cars that don’t work this way? I know my Honda Civic was the same tho my '99 odessey had the functions separated.

The A/C is needed to dry out the air, otherwise your windshield would fog up.

Nearly all cars work this way!

All cars run the AC compressor when the defroster is on. It’s not counterproductive. The AC removes moisture from the incoming air in order to keep the windows clear from fogging up.

There are temps where the AC won’t run, the pressure switches and sensors will take care of that and turn off the compressor if the system is in danger of icing up.

not all cars… I’ve never owned a car that behaved that way.

It should be up to the driver…

That’s perfectly normal, many cars (especially American cars that don’t have a A/C on/off button) will run the AC compressor when the temperature is above 45F or thereabouts.

not all cars… I’ve never owned a car that behaved that way.

Well, every blanket statement has exceptions. There were a few Asian cars from the 80’s and early 90’s that left it up to the driver but that’s about it. Go outside, start your car, turn on the def, and open the hood. I’ll bet a prime rib dinner your AC compressor cycles.

I run my AC in the winter on purpose until the engine comes up to temperature.

When it’s -20 degrees out, that 40 degree air coming out the vents feels pretty damn good.

The short answer is yes. If you remove the relay that controls the compressor clutch, the AC won’t run. In sub zero, the AC should not be running anyway because the computer controls the AC compressor clutch. Air temperature is one of the inputs it uses to decide whether to run the compressor or not. If it does run, then you probably have inside air selected which after the car warms up is warm enough to meet the requirements for the computer to turn on the AC.

Personally, I’d rather control this for myself but that does not seem to be an option any more.

I run my AC in the winter on purpose until the engine comes up to temperature.

When it’s -20 degrees out, that 40 degree air coming out the vents feels pretty damn good.

Kinda curious how that works.

What do you mean how does it work?

You have a compressor that takes a gas and converts it into a liquid. Then when that liquid is converted back into a gas at the evaporator, it’s released at a certain temperature.

So, the temperature coming out the vents is warmer than the ambient temperature.

People in the know in Minnesota do this if the AC system has a compressor button.

It should be up to the driver…

I agree, but in most if not all cars today automatically turn the AC on in the background whenever the defrost is on to remove moisture. The AC light doesn’t go on (at least on mine), but the system is engaged. Personally, I’d prefer to make the choice myself.

When I turn on the defrost the AC runs, which at subzero temps is really counter productive and just plain cold.

When you’re running both heat and the air conditioner, the air coming out of the vents should be hot, not cold. If, when you run both, the air is still cold, either the engine is too cold to warm the air or your heater is malfunctioning.

Personally, I’d prefer to make the choice myself.

I don’t think there’s a car that’s been made in the last 20 years that allows you to do that. What kind of car are we talking about?

One could always use a different belt to bypass AC, though if it is that frikkin cold your gain would be minimal if not nonexistant.

You could be correct. I looked at my manual (15 Forester) but it’s confusing. They talk about 4 different configurations with no hint as to which I have. That plus the use of strange tiny icons makes it unknown. 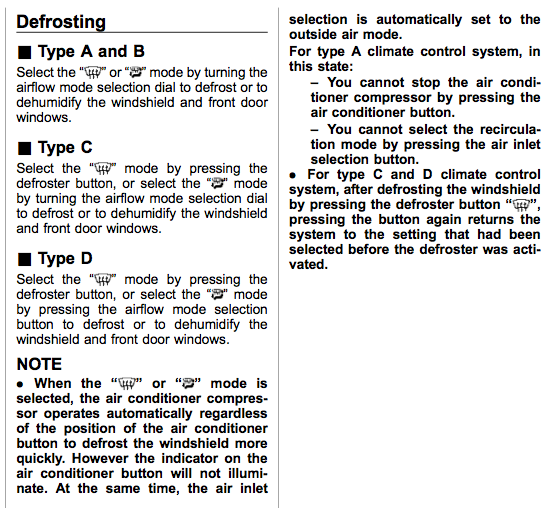 Most people are much better off not having some choices for heat and a/c controls. I cannot begin to tell you how many people I see with windows all iced up or steamed up on the inside because they think they don’t want to take in cold outside air in the winter so they set the controls to recirculate in the winter.

With a PT Cruiser I had, if you moved the dial to defrost and the other dial was set to recirculate it would actually change the dial setting to outside. You can say what you want about Chrysler products but I much preferred their heat and a/c systems to everything else. With the GM and Toyota products I have driven, if you set the heater controls to feet, it actually comes out on your shins and your feet get cold. Every Mopar I have owner puts the heat right on your feet.

It seems clear to me that the compressor operates when using the defroster;

The beginning of that chapter shows the different controls available in your vehicle.

Both of our vehicles have climate control. They seem to know when to defrost so I don’t care if the air conditioner is engaged or not.
I do seem to remember years ago that you were told to run the air conditioner at least once a month during the winter.