Soo…
First things first,
My name is Jason, I love the show.
I listen as often as I can, mostly for the humor.
My girlfriend doesn’t get it, but she tolerates it because she likes my laugh, so it all works out.
But I digress, onto business…

I drive a 2003 Honda Civic Hybrid 1.3L with a manual transmission.
It has about 126.6K miles on it.
On Fri, I left work to pick up my younger brother so we could go to scouts.
For some reason, enough pressure built up in the coolant system to caused a rupture in the coolant reserve tank.
Fortunately, I carry extra everything with me,
So I used zip ties on the small hose between the radiator and the reserve tank in order to isolate the leak,
And refilled the radiator with fresh coolant.
I then picked up my younger brother and headed off to scout camp for the weekend.
Roughly a 150 mile trip there, 300mi back (All on 3/4 of a tank, yay hybrids!)

Somewhere on the way down,
The pressure built up enough to blow the hose off the radiator and sprayed out most of the coolant.
So I put the hose back on, used a zip tie to secure it, refilled the coolant, and carried on.
The engine temperature fluctuated from normal to dangerously close to the red line for the rest of the trip.
I assumed the coolant merely needed to be “burped” (is there a technical term for that?).
We arrived without further incident.

On Sunday as we were packing up camp I went to check the cars vitals.
I was surprised to find that the radiator was positively pressurized when I took the cap off nearly 36 hours later.
It sounded like opening a can of coke (pop/soda/whatever. I’m in Texas, remember?).
The coolant was low as I suspected, so I topped it off and we headed home.
The engine temperature continued to fluctuate from normal to dangerously close to the red line as it did on the way there.

Any ideas what could cause this?
I had something similar last year,
I ended up replacing the radiator and head gasket before i found out the problem was a bad thermostat.
So it has a new head gasket.
Any thoughts on what else might cause a build up of pressure in the coolant system?

It could be the head gasket again.
Overheating could have warped the head.
Get the gasket tested and if it is blown again pull the head off and have the head and block surfaces checked for flatness.
They can be milled flat at a machine shop.

I was afraid of that,
It took me about two weeks last time change the head gasket.
How/where would I get it tested?

Also, could it possible be anything else?
I’d rather not go through a two week operation only to find out it was really a one hour job and a $15 part like last time.
I figure its best to start short and cheap.
Could it be the thermostat again?

Start the engine with the radiator cap off (be careful taking it off!).
Look for bubbles in the coolant. If they smell like exhaust there you go!

You can also apply air pressure into the spark plug hole with a leak down tester or other method.
Position the crank so the valves are closed and hold it in place somehow.
Figure out where it leaks out.

Did you get the thermostat from a Honda dealer?
This is one part I like to stick with OEM.

A leakdown test will pressurize the cylinders (one at a time), and if there’s excess air getting out, give you time to find where it’s going. It can be heard in the exhaust (for an exhaust valve leak), intake plenum (intake valve), valve cover (excessive leakage past the rings or head gasket), and in bubbles forming in your radiator (head gasket again).

This is probably the cheapest way to find out the problem. Don’t bother throwing parts at it before you’ve figured out what’s broken.

You “isolat[ed] the leak” but did nothing for its cause.

Two items control the cooling system pressure: the radiator cap and the amount of heat the coolant sees. The cap should have allowed excess pressure in the system to be released into the reserve tank, and the system should not be seeing more heat than it can safely dissipate. .

Your cap needs to be tested, and in this case, since the engine has been allowed to overheat, you should also check for a bad headgasket. Circuitsmith has provided good test methods, the latter called a “leakdown test”. You can get a kit with instructions cheaply at the parts store.

@CircuitSmith I got the thermostat at autozone,
That or Oriellys…
I’ll have to go check my receipts.
I will do the oil capless bubble test this evening.

@ChaisSOS Any pointers on who to pressurize the cylinders?
Is there a special attachment for an air compressor i can get that would screw into the spark plug socket?
Or is this going to be a jerry rig operation?
Any recommended pressure?

There are special tools available for the test, but you can also get an adapter so you can just plug into the spark plug hole to pressurize. Of course, just an adapter won’t give you a test result, but it will allow you to find an excessive leak.

I can’t surf certain sites from work, but a quick google search of “Leakdown tester” will yield several results. I would submit you’re better off with an actual tester and some test results.

Maybe someone else has a cost for you. I think you could do your motor in about an hour.

@The Same Mountainbike the cap did let the pressure to vent into the reserve tank.
That is what caused the reserve tank to burst in the first place.
That’s why i pinched and zip tied the hose.
I’ll see if I can get the cap tested tonight.

There’s a whole different tool to test pressures for radiators and caps.

right then.
I shall order that kit. Sounds like it’s a few days away.
What is the radiator cap test kit called? 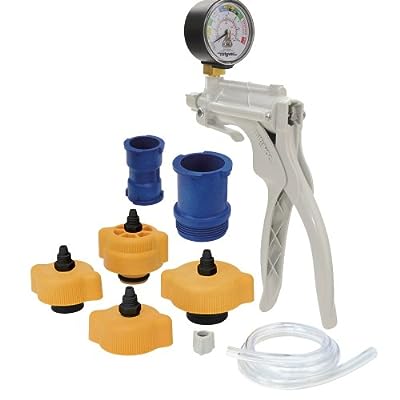 Before you run out and by all these specialty tools that you’re likely to use once, you may want to make a few phone calls. Don’t forget, the experience of the guy (or gal) running the tests is normally based on several years, and you can’t buy that in any box.

I have no intention of trying to “buy” experience like that.
I intend to collect the data and then probe the minds of experienced friends, the friendly folks on the counter at the auto parts stores, and all y’all lovely people here on there internet.
That’s how I intend to build up my experience.

And seeing as this is the second time I’m having these symptoms,
It looks like this would be a good set of tool to have handy.
I’ll get the use out of it over it’s lifetime to justify the cost.
I figure it would likely cost about that much to get it done at a shop anyway.

Ok,
So here’s where it gets weird…
I got a Cylinder pressure tester and head tester from Autozone.
They have loaners, so I took y’alls advice and didn’t buy the kit.

I tried to run the cylinder pressure test,
But the adapter for the spark plug was too big.
Which i thought was weird.
I thought spark plug holes where universal?
But the hex was too big to fit in my spark plug socket.
I got a bigger socket,
But that wouldn’t fit in the engine.

So I put it all back together and decided to run the head test.
It was this sight tube that sits where the radiator cap goes and detects the gases in the radiator.
If it detects CO2 the indicator fluid is supposed to turn yellow.
As best I can tell it didn’t.
I had two other people look at it as well to verify.
That seems to indicate no head leak.

And the weird part,
I did all this at my parents house so I could use the garage and tools.
I then drove 40 min home to my apartment,
And had no problems overheating.
The gauge stay right in the middle.
when I was 5 min away from the apartment,
I stopped to get a few things at the store.
Then during that 5 min trip, it got hot again.
Then this morning on the way to work,
The gauges stayed right in the middle.

Any ideas?
This makes no sense to me.

The overflow tank should not have ruptured, it is vented. Possibly the vent in the tank got plugged.

You might have a problem with either the cooling fan motor or the coolant temperature switch that controls it, but usually that will only cause overheating at low speeds and idle, not at highway speeds.

You still need to do the leakdown test. The set from autozone should have had two or three spark plug adapters, one for 5/8" plugs and one or two for 13/16" plugs. Maybe the 5/8" adapter was missing.

Depending on the design of the cap on the overflow reservoir, if there are two places to put the hose, one of those is the vent. If the hose is connected to the vent, the overflow will not work correctly and you can overheat. You also have to have the hose that is attached to the inside of the cap and goes to the bottom of the reservoir or it wont work.

There was only one spark plug adapter.
I’ll see if they have others.

I will also pull the overflow tank and see if I can find a vent.

So is it possible,
that the vent got clogged,
Causing pressure to build.
That pressure blew out the overflow tank,
And I tied off the hose to the tanks.
Could it be that the pressure from the blocked vent and tied hose are causing the overheating?
The guy at Autozone mentioned the vent too.

Lets fix one thing at a time. Fix the overflow system so it actually works (to include venting). This may well be the only problem you have. A lot of systems have the inlet, tube and vent all built into the cap. Make sure yours works properly, and we’ll see what we get from there.

@ChaisSOS I will take the overflow tank out and look at it tonight.
I’ll let you know about the vents then.

@Keith As for caps,
Both the radiator and the overflow tank have caps.

I just looked at the overflow tank on our Accord and I don’t see a vent in it. It looks like it just vents in the center of the cap in the seam between the cap and the tube that goes through the middle of the cap.