I recently bought 87 turbo diesel with the intention of using bio diesel. I changed fuel lines to multi purpose fuel lines. What about the o-rings and seals?

Biodiesel has a solvent effect that may release deposits accumulated on tank walls and hoses from previous diesel fuel storage. The release of deposits may clog filters and initially filters may need to be changed more often . You may also have to replace your fuel lines. Older models used rubber hoses, biodiesel is an organic solvent and readily dissolves rubber. Vehicles made after 1995 do not need the modifications in most cases. Most “O” rings are neoprene so they are not natural rubber. If you have seals made of natural rubber then you will have to replace them in order to use biodiesel.

If you are making the fuel remember to pay taxes on it. It would be a royal pain to get busted a few years from now and have to pay the back fuel taxes and a penalty all at once. The Tax Man will consider ignorance of this requirement just another lame excuse.

Lets get some semantics clear here. Are you planning on running bio diesel or vegetable oil? People seem to popularly use the terms interchangably, but they are very different. Biodiesel is an industrially produced product that is designed to be a motor fuel. You can generally use up to 20% concentration (B20) without modifications, and this is generally what you’ll get if there’s a pump in town labeled “biodiesel” (or even B5 or B10). B100 (or B99.9 for some odd tax reason) requires the modifications missileman describes (although even cars made after 1995 need modifications to run on higher biodiesel concentrations).

Veggie oil isn’t meant to be a motor fuel and has serious problems with viscosity and waxing points. As a result, you need to install a heat exchanger in your fuel tank and a second fuel tank for petroleum diesel. The way it works is you start the engine on diesel and as the engine coolant warms up it warms the biodiesel to a point that it will flow and atomize properly. This is, perhaps needless to say, a lot more expensive.

Thank you. As I mentioned I changed the rubber fuel lines. I currently am running a 5% biodiesel fuel in my car. I have spare fuel filters in my trunk. I wonder how many seals are along the fuel line.

Currently I am planning to use bio-diesel. There is a station not far away the has B99. A conversion kit for SVO is a possibility down the line. I am a Chef and have access to SVO. I have read about some conversion kits that installed would run about 2500 dollars. For now I will stick to the bio-diesel.
And what about the mystery surrounding the death of Rudolf Diesel?

It seems to me such projects are similar to climbing the Matarhorn. Just to prove you can.

Please check on the source of the B99. Indonesia cut down quite a bit of rainforest, replacing them with palm oil plantations to make biodiesel. An environmental disaster of the first order.

Here’s an article describing the problem: 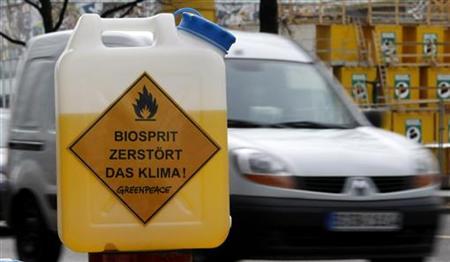 Biodiesel and other "green" fuels that Europeans put in their cars can have unintended consequences for tropical forests and wetlands, European Union reports show -- the first evidence of EU misgivings.

How different would the world be today if the Diesel engine was predominant over the petroleum engine. Vegetable oil being used more often than petroleum The miners in Kentucky were farmers instead of miners. The United States not dependent on foreign oil. Yes how different the world would be today.