I was working on a 2002 Ford E350 Econoline van 5.4 engine over 200,000 miles. Well maintained.
If leaving van set for 3 weeks or so, the battery would discharge. Alternator output 14 - 14.3 volts, although I did see it hit 13.5 once. After a charge and letting it set unhooked overnight, the battery has 12.2 volts. I did a battery load test on this and it read very good. Parasitic draw test was 2 Milla amps. I took it to an auto parts store to see if I could get an conductance test done. They did and first time it said bad battery and 2nd test said charge and retest. The employees familiarity of doing this test was not reassuring. But based on that test and the battery voltage being 12.2 at 80 degrees I am going to change battery and I think that will solve this issue. I also cleaned all connections. All that to get to my question. I would like to purchase a conductance battery tester. I don’t want to spend a lot but at the same time I want reliability. My research has brought me to the Ancell BA101 for$55. Anybody have advise or recommendations on this?

Just make sure the conductance tester can measure the battery temperature or allows that input manually.

Because without knowing the battery temperature you can’t get an accurate reading of the battery condition.

They would blame alternator, starter, bad wiring, or whatever. The fact that the battery would go dead overnight while sitting on a work bench seemed to not soak in. My testing always showed the batteries to be bad and after enough pushing and shoving to get a new warranty replacement battery that replacement always took care of the problem.

They would say, “the battery is fine; it just needs to be charged”. The fact that it had been on a slow charge all night before bringing it in also seemed to not soak in. Just my 2 cents.

I prefer batteries with removeable caps. Testing each cell’s specific gravity with a hydrometer accurately reflects its state of charge.

If the SG reveals a fully charged battery but it doesn’t work, that points to a poor connection inside the battery.

Well I’m not going to pretend that I have a professional unit but I have the Solar BA5 that I paid $50 for and am quite happy with it. I don’t use it to get the very last drop of battery but only to see how the batteries are deteriorating over time to know when to pre-emptively replace it before a problem. I do a baseline test when new to get the voltage and CCA, the check a couple times a year to see what the CCA is. I replace in 3 or 4 years when it starts getting below the stated CCA. I use it on my cars and mower batteries. Even on a new mower battery, I could see out of the box that the battery was deficient and managed to be able to return it for a new one. Never would have been able to do that with a different tester, and of course the store said it was just fine with their tester, but the CCA was 80% brand new.

I still use the old school load tester. I too have had conductive testers tell me all was well when all was not. I’m sure load testers can mess you up also though.

Yeah I have always used load testers. I once stopped by a freinds house when I saw his hood was open. I drove Home to get my load tester and the battery read good, but lower then peak. I left telling him his battery should be good. He ended up testing his ignition, connectors and stuff. After awhile he replaced the battery and all is well. This van load tested great and battery is bad. I’d really like to see if a conductance tester would show this van battery as defective.

Here’s the result when I tested my own battery with a conductance tester. 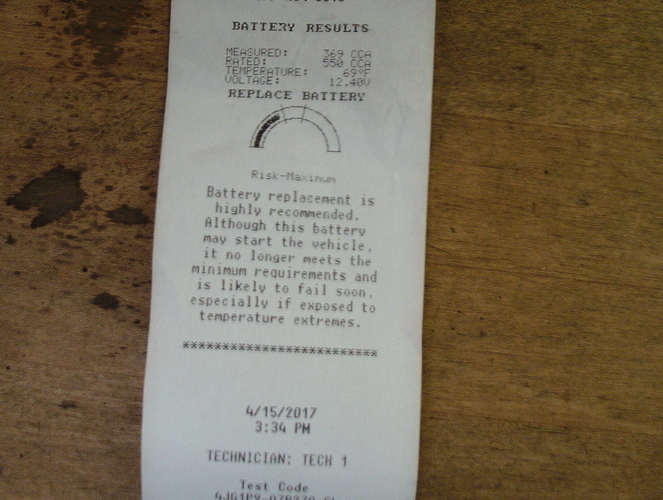 This battery wasn’t giving any trouble at all. But I decided to test it because it was over 4 years old.

I did replace the battery.

Test each cell for its state of charge. Then load test the battery for its ability to put out amperage. It takes more time and care than clipping a conductance tester to the battery terminals, but it provides deeper and more relevant information about a battery’s capability.

After you install your new battery good idea to bench-mark it. Install, then let it sit overnight in the car. The next morning, before starting the engine, measure the battery voltage. Make sure everything is off, doors closed. Should be around 12.6 volts. Now – again without starting the engine – turn the headlights on bright, rear window defroster on, anything that’s easy to turn on and uses a lot of battery power. Now measure the battery voltage again. Probably will be in the 12.2-12.4 range. Make a note of the difference, say 12.6 - 12.3 = 0.3 volts and what things you had turned on. That’s a good indication of the battery health, the smaller the number the healthier the battery, and will generally correspond to the results of a load test. Try it with the existing battery too, for comparison.

I went and bought a Ancel BST500 conductance tester. Not professional, but seems to work great. I hooked it up to the battery in question and it read and printed out bad battery. I’ve checked every battery I run across and it appears to be accurate. Very pleased so far. @Tester I purposely bought one that said it automatically adjusts for temperature, but there’s no feature on it to physically take the temperature and nowhere to input it. So it could be false advertising. For giggles because I’m wierd like that, I’ll probably test a battery at 2 different temperatures and compare. That way I will see if this thing is consistent. @shanonia I think hydrometer testing is probably the most reliable, but I’m too lazy to do that if I can get good results between conductance and load testing.

I went and bought a Ancel BST500 conductance tester.

Maybe I should have invested a little more money for something like that. My first question was where ya gonna get more thermal paper? Then I saw they have it for 5 rolls for $14 (but only 12 left). See I’m always worried about stuff getting discontinued so if it were me I’d buy more rolls. I used to rent nail guns but I’d buy a box of nails for it and next time I went to rent they’d have a different model taking different nails. So I just started buying my own nail guns and stocking my own supply. I’ve got Tecumseh engine parts too that I bought when they were selling out to China. It’s gonna be a great auction some day.

said it automatically adjusts for temperature, but there’s no feature on it to physically take the temperature and nowhere to input it.

Hope you didn’t buy to many, thermal paper has a fairly short shelf life.

The printer part is not really good. The reviews showed that the printer function doesn’t work well. Mine works ,but looking at it I don’t expect it to last longer than the first roll.

Hope you didn’t buy to many, thermal paper has a fairly short shelf life.

Sorry to disappoint but I didn’t buy one. I got the cheap version with no printer so I have to write the results down like the old days before printers. But yeah that’s what happens. Stuff goes unused. I’m getting my fourth load this summer of junk for the dump ready now and on this load is a brand new water bed mattress still in the box. We used one for over 30 years and when they went out of style, I thought I’d better have one on hand if ours sprung a leak. Out with the bed, out with the mattress. $2000 instead of $100 but I do as told. Anybody wants it better hurry. The thing is woodworker use them for gluing veneer like a vacuum bag but I don’t know anyone right now that needs one.

I still use the old school load tester

I love those old things… the kind with the mason jar sized dial on top and the big gauge. It made me feel like a mad scientist. I think mom sold it for a buck, when I went in the Army. It wasn’t in the way… just needed stuff for a garage sale.

lol Yeah, would love the mattress. It’s great for the dogs in summer… actually the bed frame, too. I had one stored in the garage for 20 years. Got rid of that and 1/4 ton of lumber, when Judi went on a spree showing me stuff I didn’t need. Needed it the next spring, but there you go.