Ive posted before about my cars driveability issues.
To sum it all up,these are my problems I’m having:
CEL p0141
Rough idle
Hesitant acceleration
Loss of power
Clear smoke upon acceleration only.

Have a look at my data and please advise. 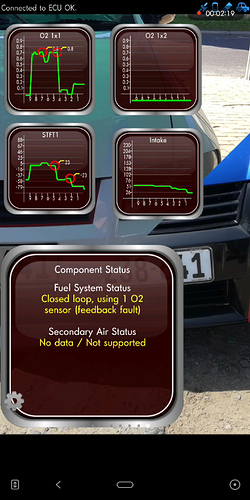 These were all upon acceleration

Closed loop just means the car’s warmed up and adjusting trim with input from the oxygen sensors. It runs in open loop after you start it and until it reaches operating temperature. The CEL code is for the downstream o2 sensor heater circuit which, as the name implies, is meant to bring the o2 sensor up to temperature as quickly as possible.

Are you sure that’s the only CEL code? It looks like the downstream sensor isn’t returning any values, so I would expect a P0140 in addition to the 0141 (or did you just typo that?). At any rate, it’s most likely time to replace that oxygen sensor.

I saw on the screen recording of the data(doesn’t allow me to post it) that the ECU goes into open loop upon deceleration.

When it idles rough especially after standing a few days and the super cold weather,I will get a MAP fault.dont have a MAF. I will clear and then only O2 returns again.

When first buying my scan tool,these are the codes I got after never reading the codes. Cleared them and only got O2. It’s the only code that returns. P0141 only. Heater circuit. 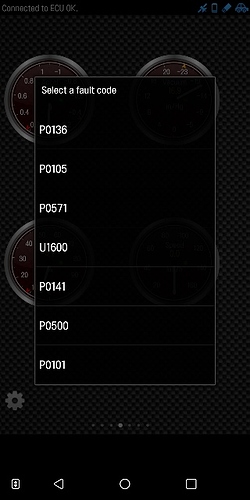 Especially given that it threw a P0136 at some point, I’d at minimum be testing O2 sensor 2 for proper operation (you should be able to find a guide specific to your car on the web). Could also be the wiring leading to the sensor.

Two of those codes are also related to the mass air flow sensor, which can cause rough running. All of the codes are potentially electrical in nature (and electrical problems on Fiats aren’t exactly rare), but with all of them taken together I’d be looking around the engine compartment to see if I could find a wire bundle that was chewed on by an animal as well as zeroing in on that o2 sensor.

Thanks for the reply.

My fiat stilo does not come with a MAF sensor. Only the diesel version.

I know the stilo has electrical faults. My short term has very erratic jumps from negative to positive. I read its meant to be around 10% of zero. So does my upstream sensor. Is it normal or is something else causing this?

I have a cone filter on and decat(previous owner) changed to k&n because other box filter housing cracked. My car never had this problem. It ran extremely well and pulled pretty quik for a 1.6 16v. It started as a rough idle but still pulled good. Then the hesitation started Months after i replaced box with cone. It had rough idle when we had box filter also.

When its super cold outside then she runs much better.

Some cars experience difficulties when you run an oiled air filter. If you don’t have a MAF then you should have a MAP, and either way, sometimes the oiled filters can foul them.

If you cleaned out the K&N filter with soapy water and did not re-oil it then you essentially do not have a filter anymore except for large-sized things like grass. It’s not filtering dust at all. And BTW, many organizations have tested K&N and other oiled filters vs cheap paper filters and the paper ones generally do a better job at filtration. At minimum you should get a bottle of K&N’s filter oil and re-spray the filter so that it will at least filter some dust, but were I you, I’d replace it with a normal filter because the oil that you spray so that the filter will filter can also foul those sensors.

Regarding normal or not, someone else on here might know more about your specific car, but I doubt it. This board primarily has North American readers, and we don’t get the Stilo here. In general, if those erratic jumps from negative to positive are happening while you’re accelerating or decelerating, it might be normal as STFT can bounce around pretty wildly as the engine speed changes. If they’re happening while the engine is just idling or you’re rolling at a steady RPM (and have been doing so for more than half a minute), and your engine is warmed up, and basically nothing related to the engine running is being changed, then that indicates there might be a problem.

Hi Darryn:
What’s confusing about the problem you’re reporting is you’re saying the car is running in closed loop mode. With a P0141 CEL, and the likelihood it’s due to a bad heating circuit with the downstream sensor, I would expect the car to be in open loop.

The downstream sensor isn’t used for fuel trim, but it is used to measure CAT efficiency and to provide heating circuit feedback.

That should clear the P0141 CEL, so you can begin to narrow down the causes of your runtime problems.

Your values are probably out of wack because the exhaust never reached operating temperature needed for the o2 sensor (600-640f) without a working O2 heater circuit. Idling in the driveway won’t bring it up to the needed temperature.

Hi. I had the CEL before the filter issue. Just got worse over time. I never had the cash to replace. It was my plan this April to sort everything out but covid19 didnt allow as work came to halt.

I can understand my random MAP fault because of filter. I cleaned out filter and will re-oil it while i look for a original filter but so far nobody has. Its been discontinued. Does it need to be to exact spec?

Somewhere it said it should only be within 10% of O positive or negative. I’m doing positive 84% to negative 16 and jumps all over the place. It’s at steady RPM.

closed loop mode. With a P0141 CEL, and the likelihood it’s due to a bad heating circuit with the downstream sensor, I would expect the car to be in open loop.

Hi Joe, upon deceleration it goes into open loop
My exact plan,im going to replace both sensors for safety because I saved up over long time over this covid19 period to replace the sensors.

Your values are probably out of wack because the exhaust never reached operating temperature needed for the o2 sensor (600-640f) without a working O2 heater circuit. Idling in the driveway won’t bring it up to the needed temperature

Hi Kurt
Those figures were taken during a drive. The car was at operating temperature.
But it makes sense. Someone else also said it could be the downstream causing the ECU to not know how to react. Sometimes it drives good and other times bad. Especially when the CAR is cold ie at first pull away out my area.

The heater circuit is is always on when the engine runs. If the ECU fails to detect it, it will set a code. Simple as that.

With no cat all bets are off. I wouldn’t drive a car without one.

I mean that’s causing the driving problems. Im going to replace air filter to original box. Cheaper than a sensor I hope then see from there.

My partner whos car it is told me and i know that it drove good and 100% with original filter.i drove it. Issues came when the k&n was installed. After the filter was installed a little while after it had this driving issue. With original box it had a rough idle slightly but pulled how it’s suppose to. Rough idle couldve just been a dirty air filter. I’m not 100% on cars with ECU,only after we met in driving a car with ECU and started reading up on how these sensors etc work. Don’t shoot me if I sound stupid

With no cat all bets are off. I wouldn’t drive a car without one.

Texases:
I can understand the concern.
I would be too, but I have had my share of experience with this years ago. The technique seemed pretty sound for faking out the rear O2 sensor, keeping the CEL off, with no added runtime drivability issues.

I noticed that my o2 sensor values are pretty steady during normal idle.

It becomes erratic and jump big jumps from lean to rich once you accelerate.

Im going to replace air filter from the k&n to normal box air filter. Could it be that the ECU is trying to compensate for the high air intake?

Update: I replaced cone with 2nd hand box. Used my last cash. Eventually got hold of one. It came with a 2nd hand paper filter that I’m using in mean time(until I get cash again,car isn’t driving anywhere really) cannot see sunlight through filter when held up to the sun directly.

She’s got more power it seems but she doesn’t pick up smoothly and as quickly. You can feel though that she wants to move but there’s restriction. She got better after changing my filter setup back to standard. Im using the second hand panel filter given with the box until I get hold of some more cash to replace the filter😒She’s averaging about 7.5 to 8l/100km. Sometimes better values than average with no traffic and traffic lights.

The fact she pulls better even with uneven acceleration,says it’s pointing towards air issue especially with erratic o2 readings when she accelerates.

I’m going to replace air filter and throw in some injector cleaner to clean out the injectors and valves etc. Already cleaned Throttle.

1st and 2nd gear her uneven acceleration is more prominent. She smoothes out at 3rd once you got going already.

Hi Darryn:
With today’s computer controlled vehicles, a dirty air filter “should not” cause uneven acceleration. Who knows with a clogged filter. And we don’t know the specifics of your fiat, which makes it harder to answer your question.

You could try a simple and quick test, which is to temporarily remove your dirty paper filter, and then take your car for a drive. If your acceleration issues disappear, then you know what your problem was.

could try a simple

Ok I will try that.

I did notice however,when removing oil filler cap that the car idle smoother. It’s rpm jumped up a few hundred. When replacing it,it slowly not even noticeably decreased back.

Does that indicate a engine not getting enough air? I read so somewhere.

I did notice however,when removing oil filler cap that the car idle smoother. It’s rpm jumped up a few hundred.

Two things come to mind to look at:

I don’t have a PCV, ive checked with other Stilo owners and they’ve confirmed. I have a engine breather which goes from below the oil filler to the intake hose/pipe. And a small thin pipe also from oil filler(below breather)to intake manifold after throttle body.
I clean it out often and I find white milky stuff on the oil filler side of the pipe.

Tried removing map connector to see how she runs without it and she almost always stalls. Same with o2. She would start to idle rough then stall eventually. Downstream sensor she won’t have any change.

Car goes into open loop when foot off the pedal/deceleration. Speak under correction but at cold start she will be in open loop then switch to closed which in my understanding is normal. When cold she starts but idles rough then few seconds or so later she smoothed out abit,tad bit rough but better. That’s the o2 sensor heated up I guess. Only happens when she cold in the morning.
Going to replace that filter anyway and run some injector cleaner to clean out valves and injectors. Worth a try lol