I have a 2008 Chevy Duramax diesel 2500HD truck with 65,000 miles. In the last six months, it has started overcharging. One day the voltage (checked with a volt meter) will be almost normal, the next too high. I have had the alternator and regulator bench tested and they were fine, but I have now replaced both with no improvement. I took it to the dealership and they say the voltage is fine, but it is not in spec with their own literature and it is boiling the batteries. My only options are to replace the ECM, which costs over $1000 and I don’t know if that will fix the problem, or sell the truck. Any suggestions?

What voltage was too high. You need to tell us those things if you want our input.

You say it’s boiling the batteries. How many batteries have you had to replace that were boiled dry, and in what time frame.

There is most likely a wire connection problem between the alternator and the ECM. The info I have shows a brown and a gray wire connect between the two points. Make sure those wires are making good connection, especially the brown one as that one lets the ECM know what the battery condition is. A bad connection would cause the battery sense voltage to go low and the system would try to compensate for that, causing an overcharge issue.

Some vehicles have a battery thermistor (it’s called a few different things depending on vehicle) that allows the vehicle to overcharge temporarily when dealing with heavier electrical loads. The thermistor basically senses when the battery is getting too warm and shuts the overcharge off, resulting in normal charge voltage. I have zero experience with your vehicle but that might be something to look at. Most of them are built into the battery cables themselves (my 1995 Buick Riviera had a small wire running along the positive cable that led to the thermistor).

The voltage has ranged from 14.5 - 15. The norm is supposed to be 13.8-14.2. It has not boiled any batteries dry - I replaced the original batteries when I started having these problems because they were at the end of their life. Since I purchased the two new batteries in February I’ve seen residue on the top that indicates they have boiled over. There is no way to check the extent of the boiling since they are sealed batteries.

Target charging voltage can range from 12.6 to 15.5 volts depending on ambient temperature, battery temperature and charging mode.

Here is some information from a service bulletin explaining different modes of operation;

Some customers may comment that the voltmeter is fluctuating between 12 and 14 volts on their full size pickup or utility vehicle. Starting with the 2005 model year, light duty full size pickups and utilities are equipped with a Regulated Voltage Control (RVC) system. This system reduces the targeted output of the generator to 12.6-13.1 volts when in “Fuel Economy Mode” to improve fuel economy. The generator may exit “Fuel Economy Mode” if additional voltage is required. This will cause the voltmeter to fluctuate between 12 and 14 volts as opposed to non-regulated systems that usually maintain a more consistent reading of 14 volts. This fluctuation with the RVC system is normal system operation and NO repairs should be attempted.

Some customers may comment that when towing or hauling a camper/trailer, the auxiliary battery for the camper/trailer will not stay charged. In most cases, this concern is blamed on the new RVC system. While the RVC system does reduce the generator’s targeted output voltage to 12.6-13.1 volts when in “Fuel Economy Mode”, this feature is bypassed if the tow/haul feature is enabled. With the tow/haul feature enabled, the RVC system will stay in “Charge Mode” and the targeted generator output voltage will be 13.9-15.5 volts, depending on the battery state of charge and the estimated battery temperature. To keep the generator in the “Charge Mode”, use either of the following two methods.

Buy one of these to keep track of volts: 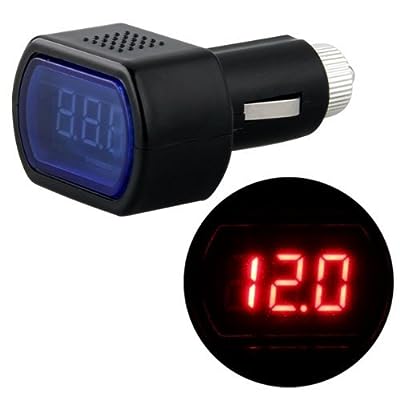