Charged for Unrequested Service at Mechanic

I bought my first car last year and just took it to get inspected. I was in a rush when I went to pick it up, so I just paid and left, but when I looked at the receipt, I saw that I was charged $14 to fill the washer fluid.

I didn’t ask for that service, I just asked for a state inspection. Are they in the right for charging me to refill the washer fluid?

Nora , the opinion here might be that you should have been called first . But if the washer reservoir was empty then they had to fill it for the inspection . Just call and politely ask about the charge .

Yeah, you might have to file this under ‘lessons learned’, and next time you can check it before the next inspection. If ‘working windshield washers’ are required for a ‘pass’, they have an excuse.

As ‘lessons’ go, this one was pretty cheap. Next lesson - before going in for service, review the owners manual to see what is actually recommended. That could save you some big $$.

Kind of steep to fill the reservoir

I think I paid under $5 for a gallon more than a year ago. Probably covered in the fine print. Here is an idea though, get used to opening the hood every so often and check oil, washer fluid, brake fluid, belt, hoses etc. and then they will have nothing to do.

My guess you would not pass inspection without it. It would have been my thought they would give you an option to fix it yourself, then retest, but you are stuck I think.

Next lesson - before going in for service, review the owners manual to see what is actually recommended.

Also, check all of your bulbs before going in. It’s cheaper and easier to replace one yourself instead of paying them to fix it or going in a second time after you fix it.

Sorry a new-car owner had that difficulty. I think your best bet is to pay up the $14. Say you refused to pay, the shop would then say then you wouldn’t pass the safety inspection test. So then you’d fill the WW tank yourself, and take it back and have to pay for another inspection. If that would cost more than $14, paying the $14 is your best bet, wallet-wise.

As mentioned above, there’s a lesson to be learned, and on the positive side, $14 isn’t such a bad price to learn it. The thing is, gov’t officials like to boss people around, direct $$ from the citizen’s wallet to co-operating businesses. Don’t blame them, this is something they can’t help from doing. One of the best ways it is to exploit the citizen’s need to drive a car. Traffic tickets, emissions testing fees, safety testing fees, etc, etc. This is one example where you got bossed by that method is all. What happened to you is small potatoes. Good idea to anticipate to have this sort of thing occur time and time again if you continue to own and drive a car.

No safety inspection in Calif, but I had to take my truck in for that purpose when I lived in Colorado. First time I got dinged for $25 for a single windshield wiper. I could have purchased a pair for less than $10 (at the time). Mechanic who did the inspection clued me in to replace WW’s before inspection next time, and to make sure the entire lighting system is working perfectly before going in for inspection. I never paid more than the state inspection fee after that.

I assumed this was a dealer not just an inspection site. No way a dealer would have done this. Of course it’s all included in the overhead. Minnesota does not do this anymore, but for you folks with inspections, would they really fail a car for low washer fluid? I guess maybe they would but seems really tyrannical. Why do you put up with this?

would they really fail a car for low washer fluid?

I think in Colorado they tested to make sure when they pressed on the button, the windshield got squirted. Didn’t require full WW tank tho.

seems really tyrannical. Why do you put up with this?

“Tyrannical” might be overstating the issue a bit. But whatever you call it, car owners who need to drive don’t have any choice but to comply. I guess if you think about it, it’s an ideal system for a ruling tyrant … lol …

Ok, another of George’s unending stories … lol … I changed address and that confused the mail, didn’t get my util trailer renewal notice from DMV. My fault I didn’t notice it didn’t arrive, but util trailer renewal pretty low priority. $15 fee I think. Two years later, I notice license plate sticker not current and no record of renewing. Phone DMV, they said I’d have to pay up to renew trailer registration again. How much? is the logical question. They say “we’ll calculate, and mail you the paperwork”. 3 weeks later, thick envelope arrives. It has page after page of fees … lol … totaling something like $780. I tell DMV agent, this seems a bit steep for missing a grand total of two $15 fees, $780 is more than util trailer is worth. Tough luck , bossed again … lol …

Register it as a new home made trailer for $15. Or sell it to Sam next door and buy it back.

$14 is rather steep for a someone to pour in $3-$4 (retail) of washer fluid. Technically, they should’ve asked, but I wouldn’t make a scene over it. Having a good relationship with your shop is important IMHO. The shop I use would probably do it gratis if you’re a long-time customer.

for you folks with inspections, would they really fail a car for low washer fluid? I guess maybe they would but seems really tyrannical. Why do you put up with this?

Some have said that operational windshield wipers and washers are an important safety feature. Some have said that air conditioning is an essential system to help clear the windows of fog when using the defroster. Standards too high?

Register it as a new home made trailer for $15

The DMV will attach a VIN plate to the “new” trailer upon inspection, this isn’t an attempt to evade fees, is it?

but for you folks with inspections, would they really fail a car for low washer fluid? I guess maybe they would but seems really tyrannical. Why do you put up with this?

Here it must be tested to show it will pump fluid onto the windshield, they do not go looking at the level in the reservoir. I wish they would.

Around here, there are two seasons where this is a serious safety concern; early winter and early spring. This is when you’re most likely to encounter liquid snow melt on the roadways that gets flung up onto the windshield and either freezes there or evaporates leaving dirt that significantly impedes your view of the road ahead. You can see this in action on any given day, morons that suddenly lose sight of expressway traffic and cannot clear the windshield because the system either doesn’t work or is empty. Using the wipers without fluid makes it even worse. Then they become a significant hazard as they suddenly brake and swerve around…

they do not go looking at the level in the reservoir

That wouldn’t tell them if the pump works. Quicker just to try it, if no spray add fluid, if no spay fail.

Right. I already said they do the basic pump test. Checking fluid level would be a secondary check that someone above surmised was possibly a requirement of testing in that area. Just noting they do not go that far here but do verify the system functions. If someone is running around with a teaspoon of fluid that wets windshield for the pump test but will be dry when they actually need it, it could help avoid that situation if they actually looked at the level…

Here it must be tested to show it will pump fluid onto the windshield,

Just out of curiosity where do you live?

I can understand adding fluid if demonstrating proper operation is required to pass safety. On the other hand a gallon jug sells for about $5, but I never comment on prices shops charge, they’re here to make money. But I will say that the last shop I worked at, and when I ran my own, we topped off washer fluid for every car at no charge. And on the third hand I’m sure I haven’t used a gallon of washer fluid in my life. I can’t remember the last time I used the windshield fluid on any of my cars. I couldn’t even tell you if they work. Must be part of living in the rainy Pacific Northwest.

I think I saw your car yesterday… 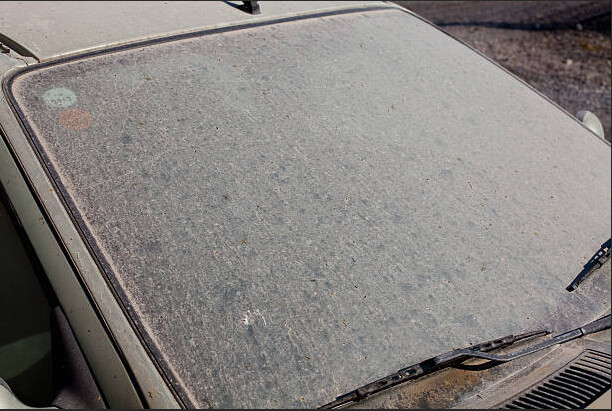 Friend complained they thought they were in a car wash when a passenger in my car, had the rear washer and front washer going at the same time.

Spent 40+ years in south-eastern Wisconsin and now reside in coastal New Hampshire. Keeping washer fluid topped up is important in these areas especially at the times I mentioned. I can go through 2- to 4 gallons per car in a year. Run the winter mix year round as it almost never fails, a hard freeze and you’re trying to thaw out all the plumbing…