I got behind a “Grand Wagoneer” on the drive home from work earlier this week. Interesting vehicle. It has that “not everyone has one” factor. So I thought, “Hey, I kinda like that…I probably will not buy one, but…yeah…I see the appeal”. I later saw them advertised on TV for a starting price of $89,9xx. I’m sure the “base” model is still heavily optioned. I know vehicles are in high demand with the chip shortage, etc. But the prices are getting a little ridiculous, in my opinion. Has there been a “market correction” for vehicles in the past? I’m not talking gas guzzlers vs economic vehicles, as the prices on all are…up. I don’t want to delve into all the political BS, but how can the average guy afford a new vehicle? It seems to me if the MSRP drops by a wide margin, that’ll mean the general population is making less money by a wide margin. My house and land were $112k, and I sold my old Jeep for $5k so I wouldn’t owe money on both the house and the land! As long as people pay the asking price for new vehicles, and I assume they are because dealer lots are relatively sparse, what’s the incentive to lower the price? I could afford a $90k vehicle, but I’m just not going to pay that. Period. What do you guys think is going to happen next? I’m making plans to do with what I have for the distant future. My 13 year old daughter is dead set on a “white Jeep”, but that seems like a pipe dream these days, whether it’s new, used, etc.

me and my BIL went to the ford dealer the other day. they had a 2 door bronco with sasquatch package on the showroom floor. it was the base model $30k with the sasquatch package $6500. they said it was $63k if he wanted it. it is crazy times out there.

I don’t follow completely. $30k was the price for the base model (sounds reasonable-ish), $65k for the off-road/what you really want package?

msrp was about 30k. it had the sasquatch package which is an additional $6500.
but they wanted $63k to buy it.

Oh. I’m used to offering less than MSRP. So the mere fact that the MSRP was less than $40k helps my feelings lol. If the MSRP is reasonable, I’ve got hope that the actual price will be too at some point. If the MSRP is touching a cheap housing price…that is scary as with the Grand Cherokee, that’s scary as hell.

My bil has had a maverick on order now for 6-8 months and no word yet when it will come in. I suspect there will be a fair amount of shaking out to do yet before anything stabilizes. I usually have bought during recessions but this one has me more concerned. Diesel shortage, def shortage, tractor and truck parts shortages could easily lead to food and necessity shortages. Never been here before with so many items out of whack at the same time. Gonna sit tight for a while.

I was going to buy the new C8 corvette, but it is now a year-to-year and a half wait.
I went to order a new mach1 mustang and the dealer said that ford would not let him order it yet and he was not sure when he would be able too. I guess they do not have all the parts or chips. it is probably at least a 6 month plus wait from when you do order one until delivery, from what I have been reading from people who have gotten theirs in the past year

Even when vehicle supplies start increasing I don’t think prices will drop much . They have past lost sales to make up for .

I don’t follow completely. $30k was the price for the base model (sounds reasonable-ish), $65k for the off-road/what you really want package?

There was a gigantic ADM

Meaning “if you want to play, you gotta pay”

I’m with you . . . I’m maintaining what I’ve got and am not planning on buying ANY vehicle for the foreseeable future

Nowadays, people that ONLY paid msrp got a bargain, from what I’m reading

it’s insane out there

the ford dealer was charging $7500 ADM for this. I told them there was no way I wanted or would pay for those ADMs or more than MSRP. they said if you pick up the vehicle within 48 hrs of delivery they would wave it.

Nowadays, people that ONLY paid msrp got a bargain, from what I’m reading

Agree. I’ve got people at work wanting to sell their year or two old trucks for what they bought them for or more. Which is great if you’re “upside down” or just don’t like making payments. But then, my question is, what do you drive after that? I just feel like their may be a crazy market correction that none of us will like. Furniture factories are already laying off big time. I buy a new piece of furniture every decade or so, so I’m out of the loop there.

the ford dealer was charging $7500 ADM for this. I told them there was no way I wanted or would pay for those ADMs or more than MSRP. they said if you pick up the vehicle within 48 hrs of delivery they would wave it.

$7500 ADM is insane. In the past, the only way I knew that I could legitimately afford buying new was the fact that they’d “take less” than MSRP. I just don’t see the price dropping quickly if people pay up. And I bet the vehicle you guys were looking at is gone in less than a month.

The current prices make perfect sense with Supply and Demand but will it make sense a year or two from today?

Considering the 72 month loans taken out these days to get your car payment down below $700… or a lease… that’s how ordinary Joe is buying those $90K cars.

My first new car was a $318 payment for 48 months… I think… Converted to today’s inflated dollars the payment would be $1900 a month or thereabouts.

Inflation makes all the numbers seem small when you look back. The 49 cents a gallon I paid for gas when I got my first car is about
$4.90 a gallon in today’s money.

I guess they do not have all the parts or chips.

I have not once, even after searching, found any reference to a part number or the name of an automotive electrical component that is in short supply. This is a complete scam. Teslas and iPhones are in abundant supply.

have not once, even after searching, found any reference to a part number or the name of an automotive electrical component that is in short supply. This is a complete scam.

You haven’t looked very hard. It’s the specific, old-style chips that automakers use by the bucket load. Toyota just announced that they’re having to make a major reduction in manufacturing rate because of the ongoing chip shortage. Somehow they’re deciding to make less money by making fewer cars, and they’re the scammers? Nonsense.

You know the SNOWMAN has to put nonsense before facts.

How about worldwide industry backlog: 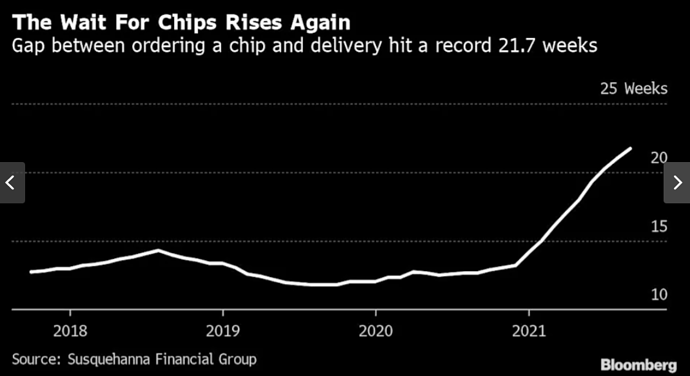