I have a 2012 Chevy Cruze 1.4 cylinder. While driving it started to overheat and I got an alarm on dash saying to turn a/c off due to overheat. The temp gauge shot up and pulled over to let the car cool down. I hooked up a code reader when I got home and got P00B7-engine coolant flow low/performance. I checked coolant and it was full but was back. I took it get a coolant flush. They said it was pretty bad. It caused there machine to clog. Not sure if they even was able to complete it because they have only machine. I asked the clerk and he assured me it was. But the issue wasn’t fixed. Car is still overheating. I just ran the car for about 20 minutes at idle. It did start to overheat but didn’t send the gauge all the way over. At about 10 minutes the radiator fan turned on. I noticed when I was driving it the gauge would max out and then randomly normalize. Is this temp temp sensor?

I checked coolant and it was full but was back

The total cost of repairs might not be worthwhile with an 8 year old car, and only a trusted, competent mechanic (Note: That means NOT going to Pep Boys, Sears, Midas, Meineke, Monro, AAMCO, or a tire shop) can give you an estimate for repairing all of the potential engine issues. 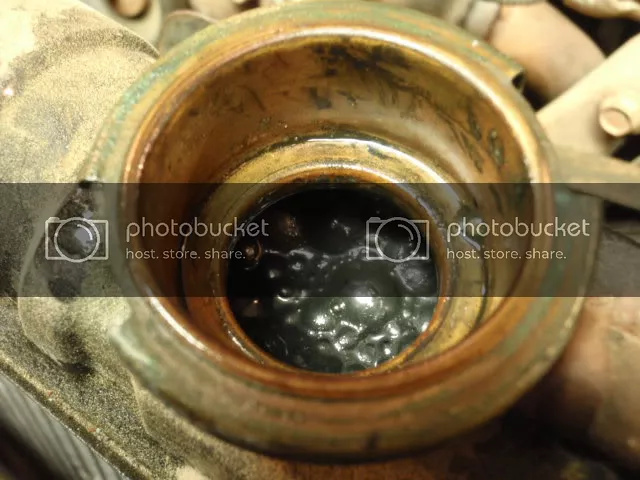 Yes. But black is an exaggeration. It’s more of a brownish color. So, if it’s discolored it’s definitely the head gasket? Can it be anything else?

It wasn’t that black. The guy at the shop told me he think the thermostat was clogged from the “sludge”. But that was just the guy at jiffy lube so I take that with a grain of salt. 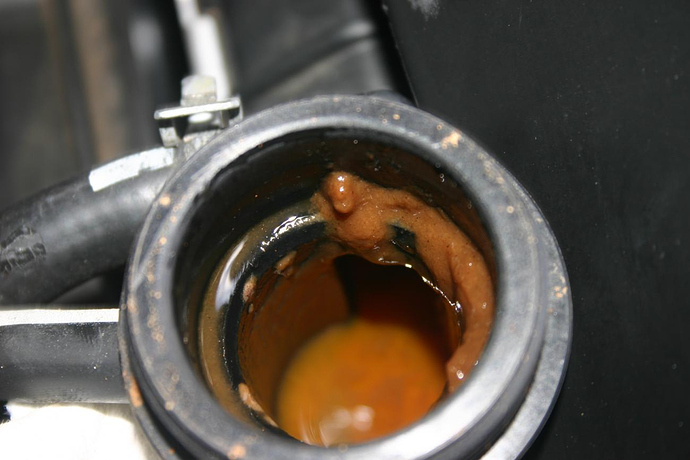 When you say ate up the coolant system you do you mean exactly? Bad hoses, water cooler, radiator?

It’s more of a brownish color. So, if it’s discolored it’s definitely the head gasket?

Brownish would be consistent with crankcase oil contaminating the coolant. And, of course, a breached head gasket can easily result in overheating the engine.

Can “brownish” coolant be caused anything else? Well, oil changes that have been “extended”, in terms of odometer mileage and/or elapsed time, can result in really dirty oil, but that oil would only be in the crankcase, and not in the coolant.

How often does GM specify that the coolant should be changed? Has the coolant ever been changed?

You need a REAL mechanic at this point. The untrained/poorly-trained guys at Iffy Lube are barely competent enough to drain/change fluids without doing damage. I would NEVER accept a diagnosis from one of them.

Maintenance schedule says to flush the cooling system every 5 years. It’s possible that the radiator is so gunked up it will never clean up and may need to be replaced. If the car were mine I’d put a new thermostat in it also. Just my 2 cents, but I consider a thermostat to be a replaceable maintenance item that should be changed out every 5 years or so; faulty or not. It’s cheap insurance.

You might consider doing away with the Dex-Cool and running the regular green coolant. Both of my sons owned Camaros that used Dex-Cool and they were sludging up all the time. Badly.
Flushed them out good, used the green coolant, and never a sludge issue since.

One thing that cannot continue is overheating as that will damage or destroy an engine. I do not know if you check the motor oil level on a regular basis but if not you should start doing so. Overheating can lead to piston ring issues which can lead to oil consumption…

Ok. So I’m going to try getting a refund for the flush since I don’t know if actually completed it. I’ll take it to a actual mechanic to get one and I’ll change out the thermostat. If it fixes the overheat I’ll keep an eye on the oil level and coolant color. If it doesn’t change I can just assume it was the dex cool. Thanks. I’ll keep you posted.

You might consider doing away with the Dex-Cool and running the regular green coolant. Both of my sons owned Camaros that used Dex-Cool and they were sludging up all the time. Badly.
[/quote]

What I don’t understand is why different car’s take a different type and color coolant instead of the old green type that has worked well and been around for many years. To me that would be like having a bunch of different type’s and blend’s of gas for the different make’s of car’s.

“Green” antifreeze is more environmentally unfriendly and animals are attracted to it and it is harmful if they ingest it. Dexcool was manufactured to be less harmful to pets and the environment. If cooling system is maintained perfectly, problems don’t happen much with Dexcool. But things wear out eventually, and when too much air is introduced into the cooling system, it creates a chemical reaction that causes sludge.

All anti-freezes are made of ethylene glycol which is poisonous to all creatures.

The only differences between anti-freezes are their additive packages,

An anti-freeze that’s made of propylene glycol is not poisonous.

Such as Sierra anti-freeze. 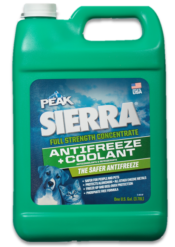 Learn more at PEAK Auto about Sierra Antifreeze & Coolant from PEAK. Antifreeze that is safer for pets, animals and the environment.

Dexcool is made of propylene glycol. It is not healthy for pets but not nearly as toxic as ethylene glycol found in the "green stuff. Many places have require an additive to be mixed with ethylene glycol to make it taste bad to animals but I don’t know if it has become a U.S. mandate yet. Not only is propylene glycol safer than pets, the main reason it is used is because late model vehicles use more aluminum and this helps in preventing corrosion on these vehicles. There is still the downfall of sludging which can happen if too much air is introduced in the system or Dexcool is mixed with ethylene glycol.