Hello.My car is overheating on high speeds at highways.I have changed water pump,radiator,head gasket,cap, and thermostat and the problem is still persisting.WHat could be the problem? 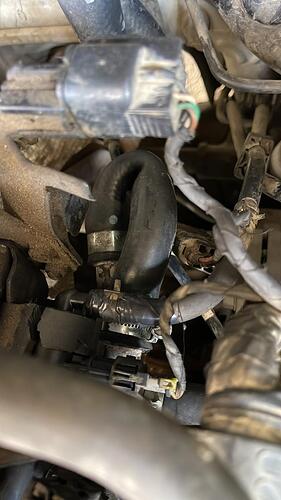 You took apart the engine and replaced the head gasket? Was there any evidence of a leak, such as bubbling coolant? Did you have the head checked for hairline cracks and resurfaced by a professional machine shop, or did you just slap it on with a new gasket? Did you use new bolts, or did you reuse the old ones, even though they stretch during initial loading?

The solution is to drill a small orifice in the thermostat (1/16" to 1/8"). This will allow any trapped air to bleed through. Also, if the heater core leaks, and you are unwilling to replace it, you should install a proper bypass hose, not this kinked hose that you have now.

My car is kia.The mechanic who changed head gasket has told me that he didnt find any crack on the cylinders.

My car is kia.The mechanic who changed head gasket has told me that he didnt find any crack on the cylinders.

Also, what kind of mechanic are we talking about? A licensed shop, or some person who claims to be a mechanic, and offers to fix peoples’ cars for less money than what a licensed shop would charge? A lot of these people who operate out of their home are dishonest and/or incompetent–which is why they aren’t the “bargain” they claim to be.

My car is kia.

Don’t make the people here who can really help you play 20 questions . What year and model Kia ? Which engine - V6 or I4 ? Also why didn’t this mechanic see the heater core problem ?

The common causes for that symptom are the parts above you’ve already replaced. hmmm … other ideas to consider

Suggest you explain why your heater core is bypassed? And the routine cooling system maintenance this car has received. If a heater core leaks, could indicate cooling system at one time got very corroded and needs to be cleaned of all the gunk that has accumulated throughout the system. If you had that problem, the gunk would usually have been very visible when doing the radiator replacement.